"Let The Games Begin" proclaimed the match programme's front-page headline for England's World Cup qualifier with Ukraine - and how Wembley revelled in the great British summer of sport.

Or at least it did for a few minutes during the half-time interval as Team GB's Olympic and Paralympic heroes were paraded on the pitch to the great appreciation of the crowd.
The words were an obvious attempt to tap in to the Olympic spirit that fortified the nation through London 2012 before receiving the not inconsiderable extra tonic of Andy Murray's US Open triumph.

It left Roy Hodgson's England with almost impossible acts to follow and when the great moments of these remarkable last few weeks are recalled, we can say with some assurance that this struggle to a 1-1 draw will not be among them.

Frank Lampard's 87th-minute penalty claimed a point Hodgson felt they deserved, and they probably just about did, but there was the distinct whiff of "After The Olympic Parade" about an out-of-sorts England display that left players and manager grateful for a draw. 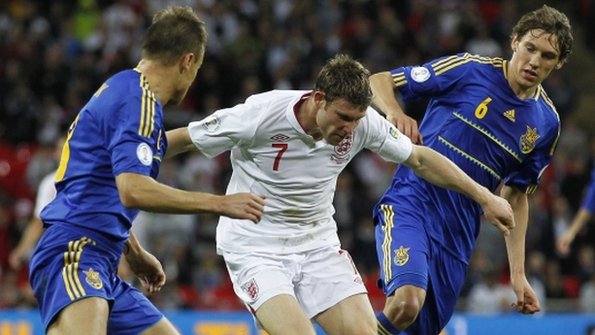 England struggled to make a breakthrough against an accomplished Ukraine side. Photo: Getty

After the stroll of the 5-0 win in Moldova this was a World Cup reality check, the cold realisation that the road to Rio in 2014 may be littered with more hazards than were first apparent when Group H was pieced together.

Ukraine looked dangerous opponents, Poland have caused England trouble in the past and Montenegro have recently shown England how stubborn they can be. Margins for further error will be narrow.

Hodgson elevated England's display to somewhat fanciful levels in his post-match briefing. He even suggested captain Steven Gerrard was "extremely unlucky" to be sent off when he was asking for trouble from card-happy Turkish referee Cuneyt Cakir by crashing into Denys Garmash having already caught Ruslan Rotan with a stray elbow to earn his first yellow card.

He also suggested that England dominated proceedings after the first 15 minutes. Even the most partisan Wembley observers (and certainly this observer) would suggest that was not actually the case, especially in a first 45 minutes when Ukraine showed superior technique, cohesion and composure to lead through Yevgeni Konoplianka's wonderful curled strike from 25 yards.

If England had any form of control, it was not with conviction. For long periods this was uninspired slog, at least retrieved by dogged determination in the closing phases if not be any amount of real quality. Hodgson insisted England would have been served an injustice had they lost, but the lateness of the equaliser after such a patchy performances suggests they actually got lucky with the scoreline.

It is easy to take issue with Hodgson's assertions but equally there must be measure in response to this result. It would be as divorced from reality to announce England's World Cup ambitions are in serious peril on the back of it as it would have been to announce they were certainties for Brazil after thrashing Moldova, a country flattered by their world ranking of 141st.

Hodgson had also, correctly, counted off 10 players missing through illness and injury who could have bolstered his England squad. He does not have the resources to carry such depletion and it showed, as inevitably it would.

Here, faced with accomplished Ukraine, they looked exactly what they are. Cleverley is a young man with his feet barely under the table at Old Trafford in an unfamiliar and testing "number 10" position for England and Oxlade-Chamberlain is a work in progress, too often naive in such surroundings - which is only to be expected in one so young.

The returning players will make England stronger and there was a major positive in the performance of Manchester United's Danny Welbeck as substitute, especially when he moved from the left flank to a more central role.

Welbeck hit a post, then forced Yevgeni Khacheridi into a panicked handball that allowed Lampard to rescue the point.

England were also denied what looked like a perfectly good goal from Jermain Defoe in the first half when he was harshly punished for a hand-off on Andriy Yarmolenko, who collapsed dramatically after flimsy contact.

So much of the rest, though, was unconvincing, right down to the sponsors' man-of-the-match award, initially bestowed on Gerrard with no small amount of fanfare before it was hastily switched to Lampard as England's captain watched a television monitor in the tunnel having been shown the red card.

For large parts England were uncertain defensively, ineffective in midfield and struggled for a cutting edge. In Konoplianka, Ukraine had the game's outstanding performer. Goal aside, one late left-wing slalom that left Gerrard trailing and Glen Johnson unable to keep pace was a thing of beauty.

Time and England's World Cup qualifying campaign will eventually tell if this turns out to be a precious point. England certainly seemed grateful for it at the final whistle.