The sound of Sir Alex Ferguson damning Everton with faint praise through grinding teeth will have been a sweet serenade to the ears of David Moyes. It was an unwitting tribute to a job perfectly done.

This thunderous night at Goodison Park was meant - in Ferguson's perfect world at least - to be about Manchester United's £24m statement of intent Robin van Persie, and the first step toward reclaiming the Premier League from Manchester City.

Instead, Van Persie was reduced to making a peripheral contribution in a 23-minute appearance as a substitute on a night when one man was, in every context you care to mention, head and shoulders above everyone else.

Those of us brave, or downright foolish, enough to tweet in the hours before the game that it was now time for Marouane Fellaini to show he can dominate the big games on a more regular basis were given the most emphatic answer.

The secret of good comedy is always in the timing so there was quite simply not enough humble pie to go around as the giant Belgian, almost inevitably after fate was so sorely tempted here, gave a performance of such physical and footballing stature that United's patchwork defence found him unplayable, a bully and a tormentor in the manner manager Moyes would have wanted.

Ferguson's irritation was clear in the succession of back-handed - and more to the point inaccurate - "compliments" he hurled in Everton's direction after United suffered their first defeat in their opening league fixture since they lost at Chelsea in 2004. 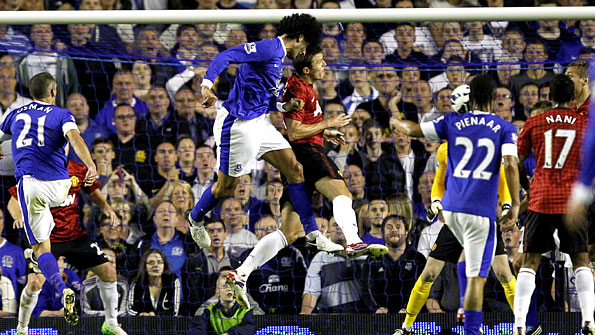 The Scot accused Everton of "just lumping the ball forward" to Fellaini when in reality they adopted a perfectly legitmate ploy of crossing from width to exploit the height advantage and technique that allowed him to make it a harrowing night for emergency central defender Michael Carrick.

It is a defeat that, in the first game of the season, is inconvenient for Ferguson as opposed to any sort of serious setback and there were mitigating factors. He was without Rio Ferdinand, Chris Smalling, Phil Jones and Jonny Evans so this was a central defence in reduced circumstances.

With those players available and Van Persie embedded in partnership with Wayne Rooney, this is a team that will be contesting the title right until the end of the season.

Ferguson fielded a side with only two recognised defenders in Patrice Evra and returning captain Nemanja Vidic. It was an open invitation for Everton to exploit - and exploit it they did.

Everton fielded a bigger and more powerful unit than United - but it was still a source of mystery why Carrick found himself so often attempting to stop Fellaini rather than Vidic.

Everton had other players that required attention but it was clear very swiftly that the main trouble would come from the leaning tower of Goodison Park.

For Fellaini, this was arguably the best night of his Everton career. Peerless in aerial combat, linking midfield and attack superbly from just behind Nikica Jelavic, and with an almost uncanny ability to control the ball on his chest before releasing team-mates.

It was the sort of performance he possesses the tools to produce. Those of us who ask questions of him simply believe he should do it on a more regular basis. If he can, Everton are in possession of one of the most influential figures in the Premier League - it really is up to him.

When he left the pitch in the closing moments to be replaced by John Heitinga, the famous old stadium rose in unison to pay tribute to his efforts, including another old United nemesis, Duncan Ferguson.

With Tim Cahill, a fading force last season after an outstanding Everton career, having left for America, Moyes has the opportunity to use Fellaini in the more advanced role that suits his attributes. On nights like Monday, he gives his manager and his team an extra attacking dimension.

For Moyes, this was the sort of opening to the season he craved as Everton have won a deserved reputation as slow starters, a team that only kicks into gear in January.

If Fellaini was the stand-out performer, Everton had other players who were not far behind. Phil Jagielka was back to his best, clearing crucially off the line from Tom Cleverley, while his defensive partner Sylvain Distin was equally distinguished.

Baines showed why he is such a coveted player and Pienaar demonstrated the subtlety of touch and creativity that made Moyes so determined to bring him back to Goodison Park from Tottenham.

With Steven Naismith coming on as substitute and Moyes ready to make further additions before the transfer window closes - the name of Liverpool's Charlie Adam was still being bandied around Goodison on Monday while Michael Owen's was most certainly not - he is shaping a team that will be competive in the upper reaches of the Premier League if it can fulfil its potential.

BBC pundit Pat Nevin, an observer of his former club from the commentary box on Monday, said: "I think this is the season when, if anyone's going to get close to the top four, it is Everton."

Early, early days indeed - but Everton finished last season as one of the most in-form teams in the Premier League and Moyes has kept the players who made that possible together. Jack Rodwell was not involved, a factor that may have made the decision to sell to Manchester City a comfortable one.

And if Fellaini can turn in performances on the scale of that which terrorised Manchester United on a regular basis, then Nevin's argument will carry even greater weight. That is all that those of us who question him, and risk those custard pies from irate Everton fans, ask.