Brendan Rodgers's conviction on his arrival at Liverpool that his restoration of the club's fortunes would not be a quick fix was underscored by his presentation of a 180-page dossier to the club's owners as a signpost to the future.

Built up over 15 years, it was a document embracing the Northern Irishman's plans for the club and the new culture he wants to put in place at Anfield - and now he has a heavy beating in his first Premier League game to graphically illustrate his point that Liverpool face a long road back to the forefront of English football.

Rodgers was measured and calm on the most maddeningly knee-jerk date in the English football calendar, as the new era dawned with a 3-0 beating by West Bromwich Albion that could have been even worse as 10-man Liverpool fell apart.

There is little doubt, however, that the manner of Liverpool's capitulation, accompanied by some basic defensive errors - and some individual performances that might have tempted Rodgers to apply his weighty tome to a few backsides - demonstrates the scale of the job he has taken on. 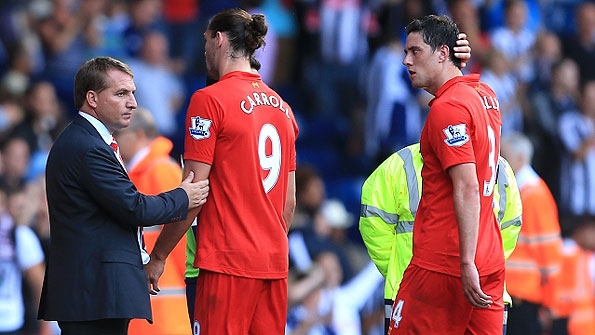 Rodgers remained calm and measured after the defeat. Photo - Empics

In a battle between the two men so keenly influenced by the great Jose Mourinho at Chelsea, it was new West Brom manager Steve Clarke who was left to toast an opening victory with a glass of wine while Rodgers was struggling to digest something a little less palatable.

Attention will inevitably focus on Liverpool because of the club's profile and the events of the summer, but no-one should underestimate how impressive Albion were, energetic and enterprising. No wonder Clarke was smiling afterwards.

For those of a Liverpool persuasion expecting instant rewards from a young manager assuming his biggest task, this was not so much a sharp wake-up call as a kick out of bed and a shove into a cold shower.

Rodgers complained about two penalties awarded against Liverpool, the first of which resulted in a red card for Daniel Agger, but the truth of the matter is that Albion were worthy winners.

Zoltan Gera's magnificent strike set them on their way before Peter Odemwingie's penalty and substitute Romelu Lukaku's header completed a scoreline that could have had a more convincing appearance.

Certainly the Rodgers stamp was on Liverpool's style, with Allen attempting to dictate terms in midfield and a three-pronged attack involving new signing Fabio Borini alongside Luis Suarez and Stewart Downing.

But it was hard to agree with his assertion that Allen was "outstanding" - he was relatively anonymous, and Borini completely so.

On the other hand, these are new players finding their way in a new team and this was no easy introduction. To describe Downing as anonymous would be to talk up his contribution to a hugely elevated level.

Sadly, anonymity has largely been Downing's stock-in-trade since his £20m move from Aston Villa last summer and his performance at The Hawthorns did nothing to hint at change. This is a player spoken about so highly by so many managers, yet he has produced so rarely for Liverpool.

Suarez was Liverpool's best performer but if there is a flaw in this outstanding striker's repertoire it the number of opportunities he requires to score.

He had three very good chances - two created alone, it should be said - in the first half but could not take any of them. Two more came and went in the second.

Suarez is a divisive figure but he is the gifted wildcard in Liverpool's pack. He demonstrated his dark side here with a nonsensical yellow card for gesturing at a linesman but his hunger was summed up with a tireless chase back into his own half to try to regain possession in the closing moments with his team already well beaten.

The Uruguayan is quite simply indispensible to Liverpool's current plans, but it was all to no avail here.

So it was a chastened Rodgers who shook hands with Clarke at the final whistle. The man who Liverpool left behind had beaten the man chosen to take them forward.

Rodgers has no big money to work with between now and transfer deadline day so skilful manoeuvring in the markets is required to bring in the reinforcements he needs to make a further personal imprint on Liverpool's squad.

Speculation has surrounded both his first-choice central defenders, Martin Skrtel and Agger, this summer but neither distinguished himself at The Hawthorns, looking ill-at-ease and vulnerable.

Joe Cole made a brief substitute appearance before going off injured, and Andy Carroll - by all accounts unwanted by Rodgers and perhaps seen as the best bet to swell the coffers - appeared far too late to have any influence.

Charlie Adam was on Liverpool's bench and is seemingly surplus while Downing would surely also be vulnerable if Rodgers could get any sort of acceptable return on his predecessor Kenny Dalglish's lavish investment in him.

All these factors make it even clearer that the Rodgers era was never going to burst instantly into life. It will take time and anyone who did not know it at 3pm on Saturday was painfully aware of it two hours later.

Rodgers described it as "a bad day at the office." It was certainly that, and not in keeping with the tone of optimism and freshness that has accompanied his early days at Anfield.

More new faces will need to arrive, some old faces must be shipped out and the culture and philosophies contained in his dossier will need time to be implemented.

Rodgers agreed there might be other days like this along the way - but he is also confident there are better days to come.