The clock in Kiev had ticked well beyond midnight when Alessandro Diamanti stepped forward to send England back in time and Italy into the last four of Euro 2012.

England’s story had a familiar ending as another penalty shoot-out sent them home heartbroken from a major tournament – but this time there must be no hard luck stories.

It is a road England have travelled before and the final destination has always been misery. It started in Turin in 1990 before moving on to Wembley in 1996, St. Etienne in 1998 then Lisbon in 2004 and Gelsenkirchen two years later. 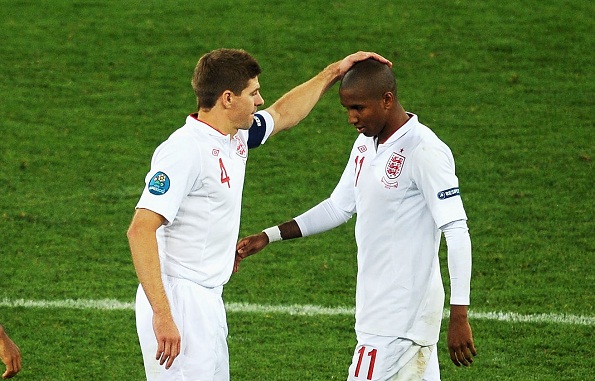 The conclusion may have been the same as manager Roy Hodgson gathered England’s desolate squad near the centre circle in rapidly emptying Olympic Stadium. The reality, however, was different.
In the past England have understandably felt a sense of injustice, a belief that an exit on penalties was scant reward for their efforts. Here in Kiev, a gripping quarter-final got the winners it fully deserved.

The statistics alone suggest England were thrashed 0-0 by vastly superior Italy and they do not deceive or paint an illusion. Italy had 68 per cent possession, 31 shots against England’s eight and eighteen on target to England’s four. The pass count was 833 to 364.

So as England’s players pulled into their Krakow hotel in the early hours of Monday morning, they can take satisfaction from their efforts in Poland and Ukraine but cannot have a single complaint about the manner of their departure.

In Kiev, however, they found that the iron tactical discipline, togetherness and resilience injected by Hodgson in his brief time in charge could only take them so far. England were tortured by the superior technique shown by Italy and one man in particular – the glorious, peerless Andrea Pirlo.

England’s exhausted midfield pair of captain Steven Gerrard and Scott Parker could not lay a glove on this elegant operator and Wayne Rooney was not able to track back and exert his influence on Pirlo.

The result was that England, barring a 20-minute first half spell in which they played their best football of the tournament, were pulled to pieces and only survived until penalties via a combination of good fortune, brave defending and poor Italian finishing.

Pirlo’s penalty in the shoot-out, chipped audaciously and gently over goalkeeper Joe Hart, sat so easily alongside the rest of his performance. Deft, intuitive and quite simply on a different plane to anything else.

It was a long, harrowing night for England and in these extreme circumstances it was to their credit that they hung in and drew the match despite being outclassed.

England would have gladly taken victory on penalties, or any other way for that matter, but there would have been an element of grand larceny about it, so much better were their opponents.

Italy’s win brought an abrupt end to the rising optimism after England topped the group. Now Hodgson must sift through the campaign and plot for the qualifiers for the 2014 World Cup. While the flight back to England will carry a liberal helping of despair, there is still plenty for Hodgson to be happy about after only being appointed in May.

It is clear England’s players have bought into his methods and there was a unity of purpose about the squad that was conspicuous by its absence in South Africa in 2010. In that World Cup campaign an unhappy squad trudged from one abject display to another, suggesting there was a lot more they could offer had they actually been bothered.

This England may have had its limitations but there is no shame in their demise. They left nothing behind. What you saw was what Hodgson has got – an honest group short of sparkle when it mattered on Sunday.

It is a quality that has bought back a measure of respect from the nation and there should be no heavy criticism of players or manager.

Gerrard has been an outstanding leader while John Terry – irrespective of how his personality and selection divided opinion – fully justified his inclusion. Chelsea’s captain was magnificent in his defiance as Italy swarmed over England.

Goalkeeper Hart has cemented his reputation as one of the world’s best goalkeepers, while defender Joleon Lescott has looked an England player at last.

There were also disappointments. Manchester United’s Ashley Young had a poor Euro 2012 rounded off with a missed penalty, while young Danny Welbeck flickered fleetingly. He is rich in promise and has a very bright England future.

Perhaps the most frustrating sight of all in Kiev was Wayne Rooney fighting in vain to make his mark on a major tournament. He may have scored England’s winner against Ukraine but the combination of a two-match ban and the very obvious effects of a lengthy break from football means Euro 2012 was another unfulfilling experience.

Rooney looked short of match sharpness and physical fitness against Italy, rather like a car trying to start on a flat battery as he struggled to spark himself into life, although such are his natural gifts that no-one should blame Hodgson for picking him.

What cannot be denied, or indeed ignored, was the chasm in class between the sides. England had no-one to match Pirlo’s ability to dictate, to treat the ball as his closest friend.

England have been guilty of squandering possession in recent times but this was different. They did not have possession as they were manoeuvred about by master manipulator Pirlo in such a manner that Italy would never have forgiven themselves had they not gone forward to meet Germany in Warsaw on Friday.

Hodgson will arrive back home with his credibility intact. Some may even feel England over-achieved given the short notice the manager had to prepare this campaign. In some respects, barring a catastrophe, Hodgson had a free hit at Euro 2012 and has made a good job of it.

He has made organisation his first point of call, understandable in the circumstances, but Hodgson may need to tinker with his formula with Euro 2012 a thing of the past. Can a rigid 4-4-2 be transformed into something more progressive for the World Cup campaign?

England will surely have more than an attritional approach when facing the likes of Poland, Ukraine and Moldova en route, they hope, to Brazil in 2014.

This game was a brutal illustration of where England are. They can come home proud of their efforts but also knowing they were eliminated by a better side.