England win over the locals but now face tougher tests

The penalty spots may have been missing but everything else was in place as England opened their doors to the Polish people for their Euro 2012 training session.

After what Uefa described as "isolated incidents of racist chanting" during the Netherlands' training, England's reception could not have been warmer inside the compact Hutnik stadium on the outskirts of Krakow.

At an open session on Friday they were met by perfect warm conditions and 3,000 locals as they entered a meticulously prepared playing surface through a guard of honour formed by schoolchildren.

If there were any fears of racism casting a shadow over proceedings they were instantly dispelled. The people of Krakow were clearly receptive to Roy Hodgson's team and the players responded in kind in their mission to embrace the place they have made their home for Euro 2012.

Hodgson's public profile could barely have been lower since England arrived in Krakow on Wednesday - no media conferences and as yet no public pronouncements as they prepare for Monday's opening game against France in the Donbass Arena.

Hodgson may yet find that Football Association chairman David Bernstein's reference to discussion of Rio Ferdinand's exclusion as mere "historical exchanges" is a little optimistic, but the manager's attention was only on the players at his disposal in Krakow. 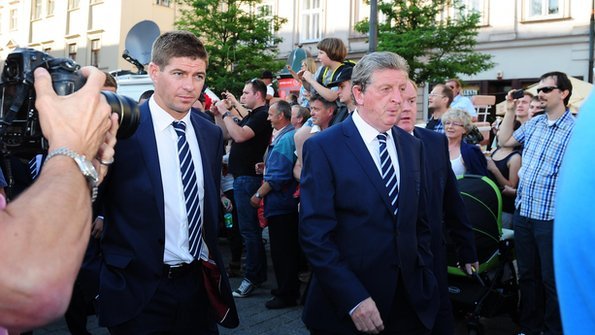 England players were greeted by the Polish locals on their way to their civic reception. Photo: PA

The 64-year-old was in fine voice as he put his players through what, in some cases, was mainly a recovery session after some heavier work on Thursday. Apart from Jermain Defoe, back in England following the death of his father, all were present and correct although many restricted themselves to the gym after a gentle jog in front of appreciative Polish supporters.

Hodgson's low-key approach will soon come to a close as the serious business starts. What he calls "the preparatory games" against Norway and Belgium have been successfully negotiated - his new role now moves on to a more serious footing against Laurent Blanc's in-form French.

The spirit among England's players was good and the public relations exercise well handled as they paraded a banner reading, in both English and Polish, "Thank you for your warm welcome in Krakow" while players happily posed for photographs and signed autographs at the session's conclusion.

And the fact that it was played out in steadily rising temperatures may have been of service to Hodgson as the weather forecast predicts searing heat of around 35C in Donetsk on Monday, a significant hike from Poland.

France are already in Ukraine and used to the conditions so Hodgson will have been glad of the work-out as part of what has effectively been a crash course in preparation following his appointment last month.

He presents a sharp contrast to his predecessor Fabio Capello as England go through their training drills. The Italian was an observer from the sidelines, restricting himself to the occasional key point; Hodgson is hands-on in all things.

The absence of penalty spots drew much attention - but it did not stop an extended session of finishing for England's strikers, one with decidedly mixed results.

The deft nature of his winning goal against Belgium at Wembley last Saturday and his natural link with Manchester United team-mate Ashley Young has given Danny Welbeck the edge in his battle with Liverpool's Andy Carroll for a starting place against France.

And on the evidence presented in training, Welbeck only strengthened his claims. He was far more clinical in his finishing work while Carroll was inconsistent, with one horribly skied effort drawing an amused reaction from the locals.

England have proved popular tourists in Krakow - but it will count for nothing when the Euro 2012 scenery shifts to the group games in Ukraine. The 40 days and 40 nights Hodgson had to prepare for this day are coming to a conclusion.

The former Finland and Switzerland boss knows this is a tough group to navigate a way out of but there is quiet confidence in England's camp, as expressed by the likes of captain Steven Gerrard - the winner of the unofficial popularity contest in Hutnik with Liverpool shirts much in evidence - and goalkeeper Joe Hart.

Injuries aside the team is mostly settled, although Hodgson may yet give more consideration to his wide players. Expectations surrounding England have rarely been lower but old instincts will kick in once Euro 2012 starts and any sort of failure will be frowned upon.

England will take a watching brief for the first days of Euro 2012 but the tough questions for Hodgson and his players will not be long in coming.