How England and FA have embraced Euro 2012

Euro 2012: Krakow
England's objective of winning Euro 2012 will face its toughest examination when they confront Italy in Kiev on Sunday - but one mission has been successfully accomplished irrespective of the outcome.

After the unfulfilling 2010 World Cup in South Africa, when misery arrived in equal measure on and off the pitch, the Football Association made the decision to warmly embrace the experience here in Poland and Ukraine should England qualify.

And as expectations rise around Roy Hodgson's team ahead of the quarter-final meeting in the Olympic Stadium, the decisions put in place by the FA to provide a framework for the tournament have been well rewarded.

The pieces started to be assembled in talks with Krakow's local authorities stretching back 18 months and the result is England's party has become, for a few weeks at least, a key component of the community and culture, making them popular with the locals who have appreciated their inclusive approach. 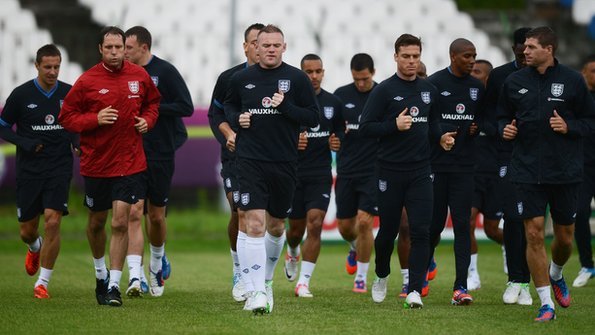 England have travelled hundred of miles from Krakow to Kiew to play their group games. Photo: Getty

The decision to make a base in Krakow when England's early games would be played in Ukraine also came under heavy scrutiny, but an emphatic answer is provided by a glance at the Group D table, which they topped ahead of France.

It is all in sharp contrast to the austere, distant environment of "Camp Capello" in Rustenburg two years ago and is understandably a source of satisfaction to the FA hierarchy.

Club England managing director Adrian Bevington told BBC Sport: "We made it clear it when we got back from South Africa that here we would look to fully embrace the tournament and be seen as active participants and seek, however we performed on the pitch, to take something away from the tournament.

"The objective with the media team, with the chairman David Bernstein and the FA board was very clear. We wanted to leave a legacy.

"We entered into partnership with the Holocaust Education Trust and we wanted to talk to the players about what we could take from the tournament. We had the visit to Schindler's Factory museum and the visit to Auschwitz was one of the principle objectives from the outset from an educative point of view.

"We met many times, going back 18 months, with the authorities here. The Mayoral reception was organised nine months out. We had the players walking across the square, showing a commitment to being here and embracing where we are. We have tried to create an environment where the players can thrive while enjoying the experience."

Bevington added: "What Krakow has provided for us is a very vibrant city but not a venue city. It has been wonderful because we have had passing England fans.

"We have people outside the hotel and the square itself is always very busy but what the players are taking from it is that they can go out if they want but they can also stay in a very nice hotel that is quiet, it's a sanctuary.

"We have had e-mails from Uefa thanking us for our accessibility - we did 25 flash interviews after the Ukraine game. The city of Krakow wrote a letter to us saying how delighted they had been with the approach of the English.

"We have attended charity events, and there has been a cemetery visit where we visited the Commonwealth soldiers' cemetery and laid flowers as a mark of respect. This sort of thing doesn't guarantee you winning a tournament but I think every player and member of staff will take memories away from Euro 2012."

It is all in sharp contrast to England's isolation in South Africa, but Bevington explained: "I have to say this in support of Fabio Capello and Franco Baldini. Their preferred option was to have a training base that had a pitch around 20 minutes from the hotel so that it would break the days up.

"They didn't want to just walk from the base to the pitch and back but you are up against other countries and you can't always get what you want."

The current approach has been welcomed by England's players as well as manager Hodgson, a relative latecomer to the plans for Euro 2012 after only taking over in early May.

"Steven Gerrard has made it clear how professional the set-up is," said Bevington. "We've got to allow the players, where appropriate, to have some freedom. That has been a learning curve for all of us involved, including Roy, who has come in only a few weeks ahead of the tournament.

"He has fully supported that objective. We spoke at length with the senior players when we first gathered the squad and then spoke with the whole group as well as coaching and backroom staff. We told them this was what we wanted to do and when we asked if there were any objections there was only unanimous support."

And it is clear any discussion about England being in a different country to their match venues has been removed by results as Bevington said: "You have to pick your base camp prior to knowing the draw. Every country is in that situation and, as is commonly known, 13 of the nations chose Polish bases.

"You have the opportunity, once the draw is made, to in effect switch your base with a country that has been drawn on the other side but we were of the view that we were very happy with the hotel we selected.

"We knew the training ground, despite some scare stories before Christmas, would be the perfect for us and that is how it has turned out.

"We went out and found a very nice plane that could take 60 of us so travel times were at a minimum. It took us - door to door - two hours to get to Kiev. We were in the air for one hour and for the flight to Donetsk it was one hour 45 minutes.

"People need to understand that if we were drawn to play in Gdansk and Warsaw we would still be flying. We weighed all that up."

England must now take the next step amid a shift in expectations and a rise in optimism. There is no mistaking the strong spirit around the camp.

"The players are very tight," said Bevington. "They are blasting the anthem out and I think there is a connection with the supporters. I sense there is a real feeling of respect from the public for these players and how they have gone about things. They respect their honesty as a team."

And in 64-year-old Hodgson, the FA has a manager it firmly believes has shown signs of filling all the criteria they set out when they chose him to succeed Capello.

Bevington added: "We said at the very outset when we appointed Roy that one of the strongest attributes we were looking for was his international experience. He's had a very limited time in the build-up but it is very clear he has been an international manager before.

"I am absolutely sure our mission of leaving a legacy here has been successful and hopefully we will have another week to ingrain ourselves into Krakow."

If England can then get that extension this Euro 2012 campaign could become even more memorable.