England must build on platform from France draw

Roy Hodgson will have felt an inner surge of satisfaction as Patrice Evra stood in the alleyways of Donetsk's Donbass Arena and damned England with faint praise.

Evra confessed to a night of French frustration as England assembled the first foundations for their Euro 2012 campaign with a 1-1 draw built around the template new manager Hodgson has swiftly put in place.

Hodgson called it a platform. Evra - in a nice sort of way - called it dull. What this was, on a night of searing heat and clammy humidity in Ukraine, was a very creditable draw. A good point.

Evra moved with great reluctance towards offering England praise, likening their approach to Chelsea's successful rearguard action in victory when they met Barcelona in the Champions League semi-final.

It did not sound like a message designed to flatter England. It certainly flattered France as the side overseen by Laurent Blanc, now unbeaten in 22 games, hardly prompts comparisons to the Catalan artists from the Nou Camp.

England were not dazzling and most would say this was the least eventful match so far in Poland and Ukraine - but it was a graphic illustration of where they currently stand and how Hodgson wishes to move things forward. 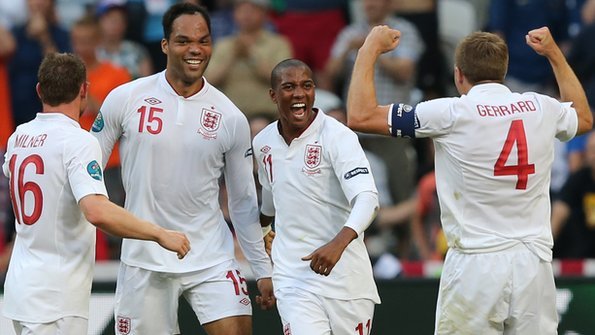 Hodgson shed what some regard as his default position of conservatism by preferring Alex Oxlade-Chamberlain, a most mature and assured figure at just 18, to Stewart Downing on the left flank. Arsenal's youngster may have only shown fleeting glimpses of what he can do as good service was sparse, but his selection alone was an optimistic signpost of how Hodgson is prepared to make the bold call when the time is right.

Taken in total, however, this was a draw that simply mirrored much of what we had seen in the 1-0 friendly victories against Norway and Belgium since Hodgson replaced Fabio Capello. It was organised and tactically solid but also with similar flaws which he will have to address as Euro 2012 moves along.

It was a tough night for England. For all the talk about how they would be able to cope with the switch in climate from cool Krakow in Poland to baking-hot Donetsk in Ukraine, the heat clearly had an impact.

England's players have even been troubled by the local insect population, who have made the sweeping, impressive Donbass Arena their home and were out in force again on Monday.

The more irritating pests were Manchester City's Samir Nasri, who was a threat throughout and scored a superb equaliser after Joleon Lescott's header had put England ahead, and the wonderful Lille right-back Mathieu Debuchy, who was by some margin the game's most accomplished performer.

England will take heart from a result they probably would have settled for ahead of the game. Captain Steven Gerrard certainly seemed satisfied as his statement about "a good point" was met with almost unanimous agreement as he walked to the team coach.

France held sway in possession to a ratio of 60-40 and Evra was on stronger ground when he suggested they were the better team. England, though, have a system that currently suits them and it is obvious Hodgson has been subjecting them to his intensive training drills and repetitions on the training ground to knock them into shape in the little time available.

Manchester United youngster Danny Welbeck gave a mature performance alongside Ashley Young up front while Gerrard and Scott Parker - who looked close to exhaustion when he was taken off - blocked up central midfield.

Hodgson does not always take kindly to suggestions he brings simply meticulous organisation and discipline to the tactics table. He will know, then, that while the manner of this match has suited this style, new and more expansive tests await.

England still look less than confident as they try to make the transition from defence to attack and a period of real sloppiness in possession resulted in a build-up of French momentum that brought their equaliser.

They occasionally fell too deep, especially when they visibly tired late on, and England failed to make the most of the vulnerability of France central defenders Philippe Mexes and Adil Rami, exposed by the pace and movement of Welbeck and Young early on.

Ukraine's win against Sweden has upped the ante in Group D. England need to beat the Swedes in Kiev's Olympic Stadium on Friday, so they will require more than being fiendishly hard to beat.

The way the group is shaped after the opening games raises the prospect of the stage being set for Wayne Rooney's return from suspension for the final match against the co-hosts in Donetsk, which may just have England's whole show riding on it. Just how Rooney might like it.

And one thing is certain - the atmosphere will have an edge of fierce hostility that was nowhere to be seen or heard in the same stadium on Monday. After deafening pre-match entertainment, the actual match was played out in passages of virtual silence.

It occasionally gave the game an unreal air as players could be heard clearly shouting instructions. If this revealed anything of significance, it was that deposed former captain John Terry has no intention of going quietly as he vocally urged his England colleagues to greater efforts.

As a starting point this was perfectly acceptable, a result England and Hodgson might just have shaken hands on before the game. It was indeed a platform, an exercise in putting down foundations.

Now Hodgson and England must take the next step and build something of substance on this early groundwork.