Who'd be in your all-time UK XI?

Stuart Pearce will soon be revealing his Team GB squad for this summer's Olympics - but who would make the cut were every post-war player from the UK eligible to play?

BBC Radio 5 live Sport will tackle this debate in a special programme, "The Great British XI", hosted by Ian Payne on Tuesday, 15 May. It's guaranteed to be full of wide-ranging discussion and disagreement.

The choices might be framed in the context of partisanship to a particular team or personal favourites but will undoubtedly read like a "Who's Who" of the legendary figures that have graced the beautiful game in England, Scotland, Wales and Northern Ireland.

England's 1966 World Cup-winning goalkeeper Gordon Banks would get plenty of support in that position but a list of his rivals demonstrates what competition he would face. 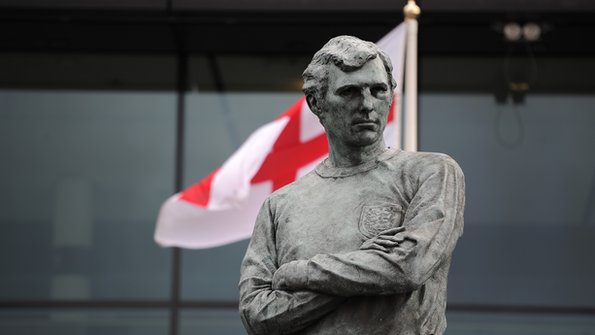 England and West Ham legend Bobby Moore would have been an ideal candidate to lead Team GB. Photo: getty

Would Peter Shilton, who followed him at Leicester City, Stoke and with England, be regarded higher? And what about Liverpool's Ray Clemence, the great Neville Southall from Wales or Tottenham's Northern Ireland international Pat Jennings?

Pick any of those and no Great Britain team would have a care in the world about its last line of defence.

At right-back, Scotland and Celtic fans would fervently press the claims of Danny McGrain while England would have candidates in gentleman Jimmy Armfield and, from the modern era, Manchester United's Gary Neville. At Ibrox these choices would be questioned by those favouring the great Glasgow Rangers servant John Greig.

On the opposite flank a current player, Chelsea's Ashley Cole, will no doubt come under discussion as will his England predecessors Kenny Sansom and another of the "Boys Of 66", Ray Wilson.

In central defence nobody from Wales will bow to anyone when it comes to championing the cause of John Charles, who could play there or as a striker, while plenty will make a passionate case for the only Englishman to lift the World Cup - Bobby Moore, not only to be in the line-up but to also captain this fantasy football team.

Scotland would seek the inclusion of Celtic's Billy McNeill, the first British player to hold aloft the European Cup after victory against Inter Milan in 1967, while his fellow countryman and Match of the Day pundit Alan Hansen must also be mentioned.

Other central defensive candidates could come in the shape of Wolves legend Billy Wright and Manchester United's Duncan Edwards. Scotland's Dave Mackay can also be included in this discussion and also that about who plays in midfield, where there is an embarrassment of riches.

Manchester United can offer up Sir Bobby Charlton and Bryan Robson while City would respond with a rival widely regarded as the club's greatest player in Colin Bell.

And what about Graeme Souness, Alan Ball, Johnny Haynes, Northern Ireland's Danny Blanchflower and of course the flawed genius Paul Gascoigne? Leeds United's firebrand captain Billy Bremner must also be put in this bracket and Rangers fans are still misty-eyed by the memories of "Slim Jim" Baxter.

The list of potential wingers would bring fear to the hearts of even the finest full-backs, and every country has a contender.

England's finest would be Sir Tom Finney and Sir Stanley Matthews. Wales can compete with Ryan Giggs and Tottenham's Cliff Jones. Once more Scotland's supporters will suggest they can top even those illustrious names with Celtic's tiny wizard of the dribble, "Jinky" Jimmy Johnstone.

Northern Ireland will insist there is only one undisputed selection for this team and it will be their very own George Best, whose shimmering brilliance illuminated Manchester United and who was a true world star despite never playing in a major international tournament.

The strikers again offers a cavalcade of Britain's finest. Liverpool fans will regard the Scot who many believe is the club's greatest player, Kenny Dalglish, as an automatic pick while his fellow Scot Denis Law is another prime contender.

Anfield will be the destination again for those believing Wales striker Ian Rush should be reunited with his old partner Dalglish up front. But Bolton fans will elevate "The Lion of Vienna" Nat Lofthouse even above that pair.

And what about these for potential rivals? Blackpool's Stan Mortensen, Jimmy Greaves, Kevin Keegan and the Premier League's greatest goalscorer Alan Shearer.

These are just some of the names with a presentable claim for inclusion - so start the debate here and let me know your choices for the "Great British XI".