Alan Pardew's face was a mask of delight and disbelief. Newcastle United's manager shook his head in the direction of Chelsea striker Didier Drogba and mouthed the words: "Unbelievable. Unbelievable."

Pardew could have been talking about Newcastle's entire campaign - instead he was reacting to the most memorable moment of this remarkable season for the Premier League's surprise side.

Newcastle have offered up times to treasure throughout their consistent defiance of the odds in pursuit of a place in next season's Champions League, but surely nothing can top the genius of Papiss Cisse deep into 10 minutes of stoppage time at Stamford Bridge.

The Senegal striker had already demonstrated his class with a searing left-foot volley from his own tee-up after 19 minutes. This was merely the warm-up act for his second that once again illustrated the renaissance Pardew has overseen on Tyneside.

With Chelsea in search of an equaliser, substitute Shola Ameobi diverted a throw-in towards Cisse loitering at an awkward angle near the left flank.

In an exhibitionist show of confidence and natural gifts, the £10m January buy from Bundesliga side Freiburg swerved a half-volley with the outside of his right foot that weaved through the air like a guided missile with enough height, power and perfect direction to leave Chelsea keeper Petr Cech stranded as it hit the net high behind him. 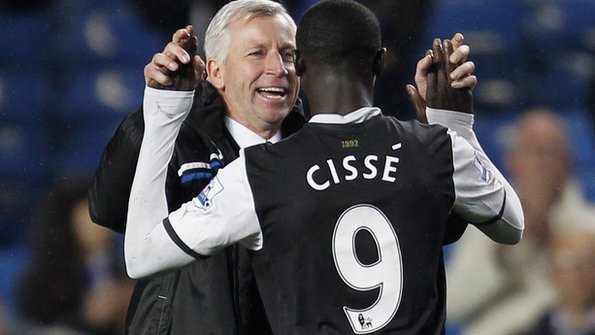 Pardew was celebrating a victory of great significance, a graphic example of the scale of his achievement this season that makes him a serious contender for manager of the year.

He found time to turn to Drogba and ask for the striker's appreciation of Cisse's skill. The beaten Ivorian could afford a smile and a slap of his hands together. Some things can even be appreciated in defeat.

Delight. Disbelief. Appreciation from the opposition. It was Newcastle United this season in microcosm.

The result of it all is that Newcastle welcome Premier League leaders Manchester City to Tyneside on Sunday with genuine hopes of a place in the top four. They are level on points with Tottenham, who claim fourth on goal difference, and four points ahead of Chelsea with two games left.

As someone who predicted Newcastle would finish 15th this season, it is time to accept king-sized portions of humble pie, although if they are honest plenty of the Toon Army would have to join me in tucking in. No-one seriously expected this, you suspect, not even Pardew.

In a week when English managers have been high on the agenda as West Bromwich Albion boss Roy Hodgson took charge of his country and Harry Redknapp was perceived as the losing candidate, arguably none has had a better season than Pardew.

The spirit, as well as the skill, he has built into Newcastle's squad was in evidence at Stamford Bridge. Those expecting a dip in morale and performance after the 4-0 loss at Wigan Athletic on Saturday would have been deeply disappointed.

Pardew simply made some tactical adjustments to a more traditional 4-4-2, assured anyone who would listen that Newcastle would respond to the setback in the same manner they had to any others this season and let them loose.

Newcastle were in no mood to be denied, even by Champions League and FA Cup finalists Chelsea. Pardew even brought his side to Stamford Bridge early - arriving before the home team - to prepare.

And the evidence of what Pardew has assembled was there for all to see. Newcastle were disciplined, organised, tactically sound - but also had a flair and power to their play that makes them so potent.

It was not just Cisse who epitomised this. Even defenders are encouraged to play, with Davide Santon and Mike Williamson showing deft touches on the ball in tight situations.

Pardew has never lacked confidence and this is mirrored in his team. Newcastle play without fear but there is character at their heart. It would have been easy to feel sorry for themselves after Wigan. Not a bit of it.

Skilful work in the transfer market, accompanied by the shipping out of big dressing room characters such as Andy Carroll, Kevin Nolan and Joey Barton in financially astute deals, has allowed Pardew to build a side of his own, with due credit to owner Mike Ashley and the power behind the throne, chief scout Graham Carr.

Plenty of clubs looked at the likes of Demba Ba, Yohan Cabaye and Santon. It was Newcastle who did business - and how handsomely they have been rewarded.

The jewel in the crown, though, has been Cisse. First scouted by Carr during his time in France, when he played for Metz and also had a spell on loan at Ligue 2 Chatearoux, it was his record with Freiburg in the Bundesliga that convinced Pardew and his scout he would apply the finishing touches to Newcastle's creation.

Pardew said: "We had been watching him for some time. Graham was watching him in France even before he went to Germany. Myself and Graham talked long and hard about the options and we both felt he was the one with the pedigree.

"He had two great seasons in the Bundesliga, with a team that was struggling, and you would have to say the quality of that league is not far behind our own Premier League."

And if you need a sum to underscore the wisdom of this deal, Newcastle got their man and still had £25m left in change from the £35m deal that took Carroll to Liverpool 15 months ago.

It is such shrewd manoeuvres that have contributed to the position Newcastle now find themselves in. The manner of their win at Stamford Bridge was testimony to it all.

Pardew may not have been in the frame to be England manager, but it is hard to imagine any other English manager looking back on their season with greater satisfaction.

Even if Newcastle do not finish in the top four and open up that great Champions League possibility, this has still been a magnificent effort - but Pardew and his players left Stamford Bridge in no mood to accept that consolation.

It will be a special occasion when title-chasing Manchester City come to town.