Frank Lampard experienced his highest high when he finally lifted the Champions League trophy as Chelsea beat Bayern Munich in the Allianz Arena on 19 May - now he faces the grim reality that his England career at the highest level is over.

Lampard, who will be 34 in June, will know the thigh injury that rules him out of Euro 2012 in Poland and Ukrakine effectively means his days of representing England at major tournaments are over.

Chelsea's midfielder spoke with brutal honesty about what Euro 2012 meant to him when he faced the media at England's Hertfordshire headquarters this week, admitting: "It possibly is my last chance with England.

"I don't see myself retiring or taking myself out of it in the near future. But I'm no fool and I know that age is a factor and, at international level, you don't go on forever." 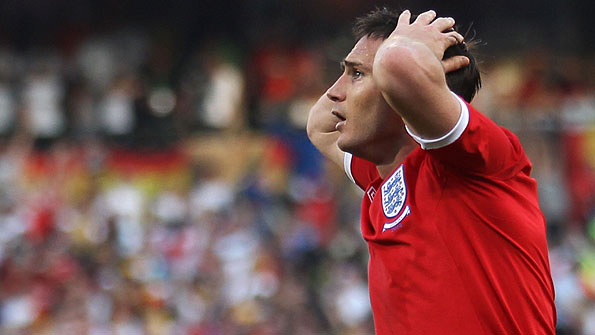 At nearly 34, Lampard's England career does not have long to run. Photo: Getty

Now that final opportunity has been taken away by an injury suffered in training on Wednesday, meaning bitter disappointment for a player who has been an integral part of England's planning at major tournaments since Euro 2004 in Portugal.

And it also means that his final taste of the big stage at a summer showpiece will be the one with bitter memories of "the goal that never was" - Lampard's shot that dropped yards behind the line with England trailing Germany 2-1 in Bloemfontein at the South African World Cup two years ago.

The "goal" was infamously missed by the officials and England's campaign ended in the ignominy of a heavy 4-1 beating.

Lampard will not get the chance to expunge that memory. It is a sad personal blow for a serious, dedicated professional who has often been unfairly maligned for his contribution with England - and in the wider context it is a blow new manager Roy Hodgson will have dreaded.

It is wonderful chance for Liverpool's Jordan Henderson, who will replace him in Poland and Ukraine. Henderson will be 22 during Euro 2012 and many sound judges believe there is much more to come from the youngster, who had an occasionally torrid first season at Anfield following his move from Sunderland.

But there is no escaping the scale of the setback that comes with Lampard's absence, following hard on the heels of Manchester City midfield man Gareth Barry's withdrawal with an abdomen injury.

Lampard has sometimes not received the full credit he deserves for his professionalism, maturity and his goalscoring ability while winning 90 caps. What he has achieved has often been lost amid the debate of whether he can play alongside new England captain Steven Gerrard at international level.

And while he would, in all probability, have been on the bench for England's opening game against France in Donetsk on 11 June, few players in the squad would have been better prepared or more determined to take their chance when it presented itself.

With Michael Carrick scratched from England's original squad because of his reluctance to travel as a bit-part player, Jack Wilshere's season wiped out by injury, Paul Scholes retired and the international development of Everton's Jack Rodwell cut short by a chronic hamstring problem, manager Hodgson's resources are now bare.

Hodgson has been unfortunate that injury problems have gone straight to the heart of his team. Barry and Lampard may not have been first-choices at the start of Euro 2012 but their experience around the squad would have been of real service to the manager.

Even greater responsibility will now fall on Gerrard and his central midfield partner Scott Parker - with Hodgson probably not even allowing himself to think about the possibility of the Tottenham player's recent Achilles problem recurring.

Hodgson still has options, however. James Milner can move inside while Manchester United's Phil Jones was already earmarked as one with the potential to slot in, when Everton defender Phil Jagielka was initially preferred to Henderson when Barry was ruled out.

And for those craving the opportunity for exciting young talent, there is now an even greater possibility that Arsenal teenager Alex Oxlade-Chamberlain may figure in England's Euro 2012 campaign at some point.

Lampard's injury may not only mean the end of his participation in Euro 2012. There is the real possibility it will be the end of his England career as Hodgson will inevitably look to the 2014 World Cup in Brazil once matters are concluded in Poland and Ukraine.

There will be plenty in football who have admired Lampard's ability and approach over the years who will believe he deserves a better ending to his England story.