If you are going to cover up cracks at a football club, doing it with silverware is a highly attractive option - and one that clearly appeals to Liverpool manager Kenny Dalglish.

Dalglish was made aware of the dissatisfaction of Liverpool's owners with a contrary, fractured season when his team's preparations for the FA Cup semi-final with Everton were interrupted by a visit from owner John W Henry and chairman Tom Werner.

Their three-day stay on Merseyside claimed the jobs of director of football Damien Comolli and head of sports science and medicine Peter Brukner, while also delivering a very obvious "must do better" hint to Dalglish.

Henry and Werner returned to the United States rather than attend Liverpool's 2-1 victory at Wembley but a return for the pageantry and prestige of the FA Cup final in May is sure to make them feel a little better about how the season has gone. 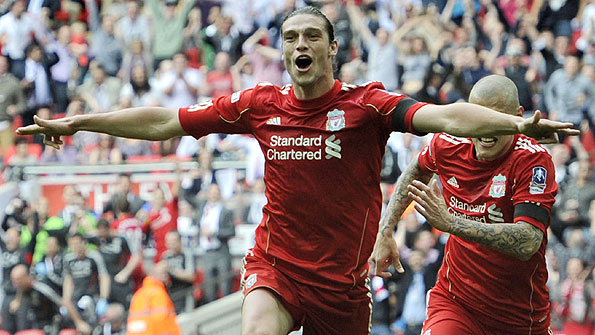 Andy Carroll repaid a bit more of his £35m fee with the winner on Saturday. Picture: AP

And while the prices paid for Liverpool's signings may have contributed to Comolli's downfall, there will be satisfaction that £35m striker Andy Carroll at least repaid a little more of that investment with the late winner.

For Everton, and manager David Moyes, there was only obvious desolation at yet another defeat to Liverpool when stakes were high, an opportunity missed in a timid tactical fashion that will frustrate them for a very long time.

For Dalglish, it was an opportunity for him to restate his belief that his rebuilding of Liverpool remains "a work in progress". And the possibility of following up the Carling Cup final win against Cardiff City with the FA Cup will be used by the Scot as tangible evidence of his theory.

Liverpool's season still remains in a form of limbo. Win those two domestic cups and in so many respects it must be regarded as a good one - lose the FA Cup final and the desperately poor Premier League season will inevitably come into sharper focus.

The league form, which leaves Liverpool virtually needing a high-powered telescope to see Manchester United and Manchester City, has been self-evidently unsatisfactory but if Liverpool win two out of three competitions it will certainly buy Dalglish time.

Nevertheless, the impression given by the rapid and eventful visit from Henry and Werner this week was that a similarly lame league season next time out is intolerable.

One of the bones of contention has been Carroll, clearly over-priced when bought from Newcastle and seemingly heavily burdened by a price tag that was not his doing. Here he played his full part in a deserved Liverpool win.

Carroll was a threat throughout a game that was not of the highest quality, willingly coming back for more after he had missed - and missed with some conviction - one of the easiest headers he will ever have, before glancing home Craig Bellamy's late free-kick for the winner.

It completed a comeback that started just after the hour when Sylvain Distin's backpass fatally fell closer to Luis Suarez than Everton keeper Tim Howard and gave Liverpool the momentum that was to carry them into their first FA Cup final since 2006.

Carroll has been Liverpool's match-winner twice in a week now after scoring at Blackburn, with continuing improvement in his form recently. The confidence that appeared to have been stripped is being restored, if only gradually.

Everton manager Moyes cut a dejected figure in his post-match briefing, perhaps knowing he and his team had squandered one of the best opportunities they will ever have to pay back the misery they have suffered at their neighbour's hands on big Wembley occasions in the past.

And for Moyes himself, there was the painful knowledge that even in this troubled Liverpool season, he has failed to fashion a derby victory in three attempts.

This was a scenario Everton's fans have witnessed before, a team - and maybe its manager - simply not having the confidence and belief that Liverpool could be beaten.

After Everton took the lead when Nikica Jelavic, a striker of finesse and threat with an ice-cold mind in front of goal, profited from a calamitous lack of communication between Jamie Carragher and Daniel Agger to score, they seemed happy to contain.

With a lead to encourage them, Everton failed to get the job done and recent results suggest they struggle psychologically to convince themselves they can overcome Liverpool.

Liverpool's third-choice keeper Brad Jones, playing because of Pepe Reina and Alex Doni's suspensions, was barely tested when Everton's obvious option would have been to put the Australian under intense pressure at every opportunity. It was an option they failed dismally to explore.

Moyes now completes a decade at Everton without a trophy and, for all his widely acknowledged work in that time, it is still a statistic that will wound him. He has said he will discuss Everton's future direction with chairman Bill Kenwright at the end of the season - it promises to be an interesting, and potentially pivotal, meeting.

Dalglish will no doubt have his own meetings with Henry and Werner, the main representatives of Fenway Sports Group, as well as producing his much-publicised written review of the campaign.

The latest derby win over Everton affords him the opportunity to make it a more cordial communication than it might have been.