What is the best XI in the history of the Premier League?

The Premier League has been home to many of football's elite for 20 years - so choosing the final XI to represent the best of those two decades is the equivalent of the game's hospital pass.

No choice will please everyone because someone's favourite will be excluded, someone's compelling case ignored because only 11 players can be picked within the designated 4-4-2 format.

So with the hardest tin hat on, here goes - and then you have the opportunity to choose your Barclays Premier League team of the last 20 seasons.

Some areas are easier to decide than others. In a matter of personal preference, Peter Schmeichel's deeds at Manchester United will win my goalkeeper's choice.

Schmeichel's Old Trafford colleague Gary Neville goes in at right back while Ashley Cole's successes at Arsenal and subsequently Chelsea means he edges out the wonderful and unsung Denis Irwin on the opposite flank of this defence.

Central defence will provide another fruitful area for fierce debate and disagreement. As a judgement over the course of the entire Premier League I have gone for Arsenal captain Tony Adams, an inspirational leader and collector of trophies, to play alongside Rio Ferdinand, who has played in the top tier for West Ham United, Leeds United and for the last decade at Old Trafford. 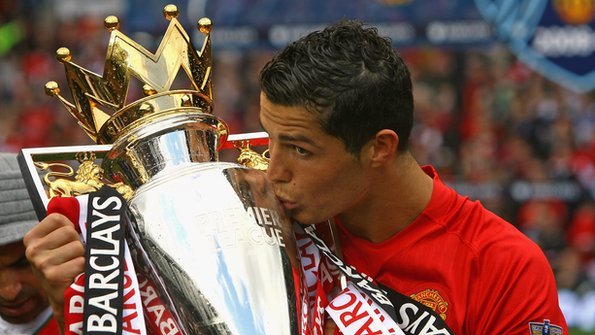 This area of the pitch, along with central midfield, caused more thought that any other and quite frankly plenty of combinations would be of equal stature when you study the other names up for nomination such as Marcel Desailly, Nemanja Vidic, John Terry and others.

As a little bit of a left-field suggestion I may have been tempted to pair Adams with his Arsenal colleague Martin Keown had he been on the list, but he is not available for selection.

And so the heartbeat of this team. This very phrase alone means one man takes his place straight away - and as captain. The great Roy Keane.

Keane was abrasive, fiercely competitive and undoubtedly had a dark side to his game. Set this aside, however, and you had the player you would want in football's trenches with you all day long. He could adapt to any type of game, whether it was of the flowing attacking variety or a physical war of attrition.

The choice of who partners Keane is virtually impossible, but as this is a reflection of 20 years of the Premier League I am going to go (with apologies to Liverpool's Steven Gerrard, Chelsea's Frank Lampard and Arsenal's Patrick Vieira) for Manchester United's Paul Scholes.

The key to this selection is endurance as well as quality. Scholes easily stands alongside those players but they were relative latecomers compared to Old Trafford's "Ginger Prince", who has played in the Premier League for 18 seasons and won 10 titles (so far).

Again it is a matter of personal preference but only one man was at the forefront of my thoughts when it came to leading the Premier League's attack - Alan Shearer.

Shearer's record of 260 goals in 441 Premier League games for Blackburn Rovers and Newcastle United demands inclusion and, after much thought within the framework of the selection process and team formation, his partner will be Thierry Henry, with the not unreasonable goalscoring record of 176 goals in 258 games for Arsenal.

All the names on a world-class list of strikers would make a wonderful pairing. Players of the calibre of Dennis Bergkamp, Eric Cantona, Ruud van Nistelrooy, Wayne Rooney and Robbie Fowler are also available for your consideration. 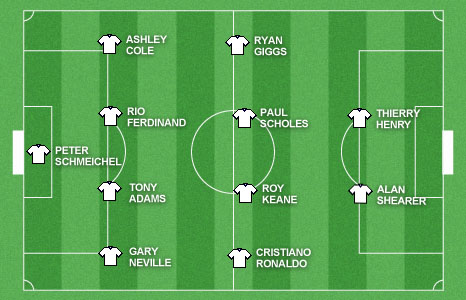 The combination of Shearer and Henry, in this purely subjective selection, provides the identikit of the perfection striking partnership - but maybe you think differently.

Only one man could patrol the right-flank, and lots more besides, and that is Cristiano Ronaldo. The Premier League charted his journey from teenager arriving from Sporting Lisbon through his successes at Manchester United to superstar status and an £80m move to Real Madrid in 2009. And a record of 84 goals in 195 games only adds to the potency of his attacking cohorts Shearer and Henry.

The place on the other flank goes to Ryan Giggs, the man for all 20 seasons of the Premier League and now fighting to win his 13th title at Manchester United. Giggs has made the transition from dazzling teenager to the most mature of Premier League operators over these two decades, still possessing all the qualities Sir Alex Ferguson requires to continue his own silver-lined Premier League story.