Match officials need all the help they can get

Martin Atkinson's anguish was revealed by Harry Redknapp as the latest calls for the introduction of technology reached a crescendo deep inside Wembley.

Tottenham manager Redknapp had spoken to referee Atkinson after a decision - and indeed a wider issue for world football - had been highlighted once more in a moment that helped to define Chelsea's 5-1 win in the FA Cup semi-final.

With Chelsea leading 1-0 Atkinson, well-positioned and close to the action, ruled Juan Mata's 49th-minute shot had beaten a desperate scramble by Spurs duo Ledley King and Benoit Assou-Ekotto and crossed the line. Initial suspicions proved ominous for Atkinson and were confirmed by the evidence of replays - it had not and Tottenham were the victims of a serious injustice.

It was the continuation of what has been a harrowing period for officialdom and Redknapp said: "Martin said he's going to have a bad week. He said he feels worse about it than I do. I said 'I don't think so.'"

As players past and present, including Michael Owen, Alex Oxlade-Chamberlain, Gary Lineker and Ruud Gullit, took to Twitter to deliver their verdicts a common thread emerged: there can be no more delays in bringing greater certainty to the game and much-needed assistance to referees and their assistants by ushering in the era of technology.

As the incidents pile up so the case becomes compelling to the point of being irresistible. The game is only doing harm to itself if it delays any longer and as Redknapp, rarely a public critic of officials, said: "It can't go on like this. We can't carry on with important decisions not being correct. Video technology must come in." 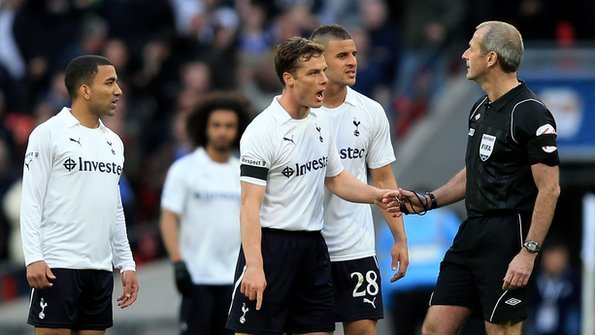 The final phase of technology testing will take place later this month with the definitive decision expected to come after a special meeting of the International Football Association Board in Kiev in July. Football Association general secretary Alex Horne has already told the BBC he would like to see it implemented in the Premier League next season.

You did not need technology to detect Redknapp and Chelsea counterpart Roberto di Matteo, the beneficiary on Sunday, would like it to be approved even sooner.

Redknapp was measured and sympathetic and he stressed Atkinson had simply displayed human error. Suspicion lay elsewhere in two other incidents that provided a contentious sub-plot to the day's events.

Celtic manager Neil Lennon took to his Twitter account to suggest decisions made by referee Euan Norris in their 2-1 Scottish FA Cup semi-final defeat against Hearts were "personal".

The bones of contention the combative Lennon picked over involved the decisive late penalty given for handball against Joe Ledley and the subsequent refusal of one for Celtic in the closing seconds when they believed Hearts' Andy Webster had handled.

Meanwhile at Old Trafford, Manchester United's Ashley Young was again the central figure after his latest exaggerated gymnastics earned a penalty against Aston Villa. Even his manager Sir Alex Ferguson admitted: "It was a dramatic fall and he overdid it."

Young was actually clipped by Villa defender Ciaran Clark and referee Mark Halsey was correct to award the spot-kick, but the United attacker's flying tumble made life hard for the official. Video technology would have made no difference here but it was another illustration of the factors that must be weighed up in seconds by Halsey and his colleagues without outside assistance.

It was a day that once again shone a brutally harsh light on officials, following on from a succession of contentious incidents such as Chelsea's goals in their win against Wigan - both offside - and QPR's Shaun Derry being sent off after his brush with Young at Old Trafford last week.

Atkinson's decision at Wembley was perhaps a classic case of a referee under pressure making a snap mistaken judgement. It was difficult to see how he could arrive at his conclusion with any degree of certainty given that it was almost a scene of human stock car racing in the six-yard box.

Mata's celebration may have been the trigger to persuade Atkinson to award the goal and it was clearly a matter of severe regret when the referee encountered Redknapp later. How Atkinson must have wished for a swift referral, replay and review that could have told him the facts in a few seconds and spared him bitter professional and personal disappointment.

He has had a tough season, seeing the red card he waved to Everton's Jack Rodwell in the Merseyside derby at Goodison Park rescinded, and being on duty when Manchester City's Mario Balotelli escaped punishment for his reckless challenge on Arsenal's Alex Song at The Emirates.

He was also referee when QPR's Clint Hill was denied a goal at Bolton, even though his header was behind the line - although his assistant Bobby Pollock was the main decision-maker on that occasion.

The incidents have followed Atkinson around and are bound to add to the high pressure of controlling games such as Sunday's FA Cup semi-final. Judging by Redknapp's relaying of his mood he was clearly devastated by his mistake and would no doubt welcome any high-tech help the game's hierarchy can afford him in future.

Referees and their assistants have been subjected to fierce criticism in recent weeks and the reasonable voice of Redknapp spoke the truth when he said: "The referee here made an honest mistake. He didn't do it on purpose but it was a mistake."

This is why Lennon's suggestion that key decisions in Celtic's game were personal is quite a call to make.

Referees and their assistants do not want to get it wrong - so they should get the help they require from the game's rulers in the form of technology as well as from players and managers.

Any dissenting voices against the introduction of technology to make key decision-making a more exact science need only have eavesdropped on the conversation of mutual regret between Atkinson and Redknapp in the bowels of Wembley to realise those involved in the game are united on the way forward.

This weekend proved once more - not that it helps Spurs, Redknapp or Atkinson - that it is time football embraced all the modern techniques available to eradicate the injustices that still scar the game.