The Stretford End demanded a wave and Sir Alex Ferguson gave them a clenched fist. Manchester United led Everton 4-2 with time running out and the Premier League title was in sight.

Ferguson felt so relaxed he even felt able to joke and joust on the touchline with his old foe the fourth official, this time in the shape of Kevin Friend. What happened in the ensuing minutes last Sunday lunchtime proved to be no laughing matter for United's manager.

Everton mounted a late comeback to snatch two points away from the reigning champions, giving Manchester City even greater incentive to subsequently beat Wolves and set up the match of the season at Etihad Stadium on Monday.

Ferguson's switch in emotions in those final moments were a graphic illustration of the mood swings that have transformed the meeting between City and United from potential dead rubber to the season's decisive moment inside the space of three weeks. 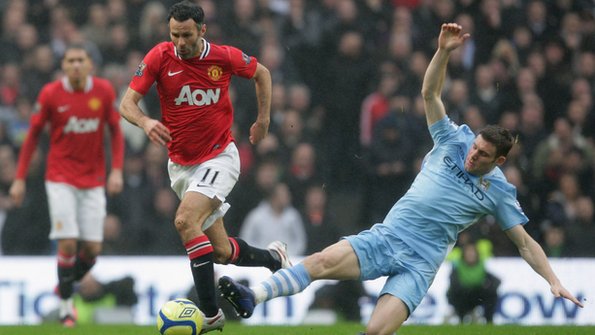 United and City will battle it out for the title on Monday. Photo: Getty

The Scot admits you would have to be "a confirmed masochist" to enjoy an occasion of such tension and footballing stresses but this is what everyone inside Etihad Stadium on Monday will be braced for.

In their darker moods City may have had painful visions of forming a guard of honour for a United side with the title already confirmed - now they have the opportunity to take a giant stride towards their first title since 1967-68.

When City's coach drove through the tunnels under Emirates Stadium and out into north London after Mikel Arteta's late goal had condemned them to a 1-0 defeat earlier this month, it was accompanied by a pall of gloom.

Manager Roberto Mancini declared the title race was over, with rather more conviction than he has done since United lost at Wigan and drew with Everton, and the main item on the agenda was the fall-out from another madcap Mario Balotelli performance that earned him a red card.

The shackles that seemed to restrict City as the pressure grew were suddenly released, as was Carlos Tevez from a place on the bench. The former freedom returned. West Bromwich Albion and Norwich City were thrashed and Wolves beaten and relegated. Twelve goals scored and only one conceded.

It was as if the resignation of feeling the title had gone had cleared City's heads. Maybe they felt this meant there was nothing more to lose. Whatever the motivation, they suddenly find themselves masters of their own destiny once more with three games left.

Since that loss at Arsenal, an eight-point deficit has been reduced to three points courtesy of an uncharacteristic United wobble and the renewal of City's form and confidence.

So, in the white heat of derby battle against United on Monday, will the jitters that undermined them a few weeks ago return, or will City's minds be concentrated by the presentation of this unlikely lifeline by United?

It is a huge test of nerve and one that intrigues former Manchester City defender Andy Hinchcliffe as he told me: "City looked tired, short of ideas but that Arsenal game seems to have liberated them in a strange way. It seemed at that point, whether it was because the players and manager had accepted the title was beyond them, that they found freedom again.

"They did get nervous when they were top of the league and slipped up badly losing at Everton and Swansea and drawing with Stoke City before they lost at Arsenal. Now they are in a very strong position again.

"They go back to the top of the league with a win but now it is a question of whether it will prey on their minds again. They have got wonderful players who have been successful in other countries but winning the Premier League is different to winning titles in other countries.

"Will they now get nervous again or will they be inspired by the chance United have given them?"

Ferguson's side, for all their recent stumbles, still hold the upper hand. The draw is a result more suited to United, while the Scot also knows City have that increasingly hazardous visit to Newcastle United to negotiate.

But he accepts this derby fixture will play an increasingly pivotal role in the destination of the Premier League title after admitting City "are not going away."

Praise indeed from the man who once labelled them "the noisy neighbours" - but he will want to silence them in their own home on Monday.

Mancini will look to his attack to provide the impetus with Sergio Aguero back to his best aided by the return from exile of fellow Argentine Tevez and the formation of a potent partnership that has been central to their revival. Mario Balotelli could yet figure as well.

Ferguson, meanwhile, will demand an improvement on a defensive showing that was ragged at the edges and over-generous in a draw against Everton that United might live to regret if they cannot put matters right at City.

He was philosophical about the timing and importance of the fixture which United themselves have managed to give greater significance by their own slips that cost them points and allowed City to eat into what, at one point, seemed an impregnable advantage.

"We have played them three times this season in the Charity Shield, the FA Cup and the 6-1 defeat in the league at Old Trafford," said Ferguson, "but it doesn't matter what has happened before - the build-up to the game, who has dropped points and who hasn't dropped points, it really is all down to this game.

"I suppose when the fixtures came out at the beginning of the season, all roads pointed to this game."

And Monday at Etihad Stadium will go a long way to deciding whether it is Manchester City or Manchester United en route to the Premier League title.