Roberto Mancini must now fear Manchester City’s Premier League title challenge will go the same way as his prediction that Manchester United would draw at Blackburn Rovers – and come up agonisingly short.

City manager Mancini, perhaps clutching at straws, suggested Blackburn might take points off United as some belated compensation for his own team's shortcomings in allowing Sunderland to leave Etihad Stadium with a draw on Saturday.

And for 81 minutes at Ewood Park Mancini’s luck held as Blackburn fulfilled his prophecy and United struggled to make the breakthrough that would have put clear daylight between themselves and their neighbours.

It all changed, with an air of inevitability, in the space of five minutes late on as Antonio Valencia’s swerving finish and Ashley Young’s precision strike gave United a 2-0 win that had a fired-up Sir Alex Ferguson ending his night as it began, with a fist-pumping salute to 7,000 travelling supporters. 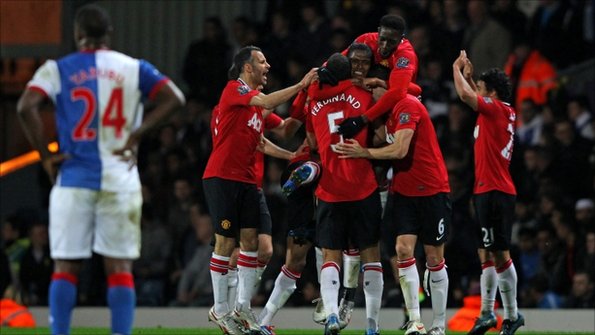 The gap is now five points - not insurmountable of course, but it is hard not to detect a decisive shift in momentum from The Etihad to Old Trafford at this crucial phase of the season, with United gathering speed at the very moment City are losing this precious commodity.

In this most unpredictable season it would be folly to announce the end of the race with 21 points to play for, but the scenes of celebration from all those with United connections as Howard Webb sounded his final whistle betrayed their unspoken belief that a crucial blow had been struck.

United won the title with a draw here last season and, while there was no such certainty with this result, they are now separated from City by a margin of some significance.

With United facing struggling QPR at Old Trafford on Sunday before City visit Arsenal, there is the realistic prospect that Mancini’s side could kick off at The Emirates eight points behind and knowing only victory will do.

Try as you might and as risky as it may be, it is now hard to escape the inevitable conclusion that United will go on to claim a 20th title.

It is a statistic that may just bring almost as much pain to Liverpool - as they are stuck on 18 - as it will to City, who surely believed only a few weeks ago that it was their destiny to claim the crown this season.

City now face the possibility, unless there is another dramatic twist in this turbulent campaign, of welcoming United to The Etihad on Monday 30 April in entirely different circumstances than they had hoped.

This was meant to be a title decider, or even a public demonstration of the shift in the balance of Manchester's footballing power. Circumstances must change almost immediately for that scenario to unfold.

It may not end up being a dead rubber but the galling prospect for City is that, unless they can fashion a way of erasing United’s healthy advantage sharpish, then they may be welcoming Ferguson’s men into their home with the race almost run. And without the finish they wanted.

This would be close to unpalatable after a season of such promise, but the urgency – indeed, mounting desperation - of their situation will have been brought home to Mancini in those closing moments at Blackburn.

City have illuminated this season with some of their football and there is no question they are closer to being champions than they were at this time last year, but they have faltered crucially in recent weeks with United at their shoulder.

With timing perfected over years, United have come with a run of seven straight league wins that have allowed them to prey on any uncertainties and poor results just a few miles away at City.

And as some of City’s key performers such as David Silva have dipped, United’s pivotal players have come to the fore.

Wayne Rooney has been outstanding in recent weeks – surely a serious contender for Footballer of the Year should United with the title – but at Ewood Park the plaudits went elsewhere.

Valencia’s explosive strike was the game’s defining moment, swerving past Blackburn goalkeeper Paul Robinson in a moment when he might reflect he could have done better.

It was deserved reward for an outstanding performance from the winger, the game's stand-out player.

He was a creator for so much of the game, athletic and powerful, then when his colleagues failed to profit from his supply line Valencia simply did the job himself. This is a player growing swiftly in stature with the prospect of developing further.

United’s other hero was a young man who has been criticised here before, so deserves his praise even more to redress that balance.

There is a line that can be drawn between goalkeeper David de Gea’s flimsy performance in Blackburn’s 3-2 win at Old Trafford on New Year’s Eve and his outstanding contribution on Monday – and it may just chart his progress towards becoming a worthy successor to Edwin van der Sar.

After his nerve-riddled showing against Liverpool at Anfield in United’s FA Cup defeat, De Gea carried all the hallmarks of being mentally shot.

And yet he has emerged from this dark place to look like the goalkeeper Ferguson staked so much on when he bought him from Atletico Madrid.

Not all is perfect. He will still be tested physically because of his relatively slight frame and was fortunate a second-half fumble from Morten Gamst Pedersen’s free-kick went unpunished, but elsewhere the young Spaniard was agile, spectacular and above all reliable in United’s moments of need.

Two saves in particular, on the stroke of half-time, were testimony to his increasing assurance. He sprung to save brilliantly from Marcus Olsson and was equally athletic to turn away Grant Hanley’s header.

“He got a grip of it and stood up like a man, said Ferguson about De Gea’s rebuilding of his confidence since his last meeting with Blackburn.

So United pulled out of Ewood Park have pulled further away from Manchester City – and if Mancini was tempted to take another glance into his crystal ball he may not have liked what he saw.