Man City's horse bolts as Balotelli heads for the exit

The striker's chaotic contribution to a loss at Arsenal, which leaves City eight points behind Manchester United with six games to play, was symptomatic of his part in the decline of a season that held so much promise for Mancini and his team.

And, while the conclusion to this campaign's story has yet to be written, it is increasingly likely that the red card Balotelli received to complete a day of unrelenting misery for City could be his final act in England.

On a day when, after United's win against QPR, City knew only victory would suffice they produced a performance short on ambition, low on energy and looked and acted like a team that knew the game was up.

Honourable exceptions could be found in defenders Vincent Kompany and Joleon Lescott, as well as keeper Joe Hart, but there was nothing of substance to console City. 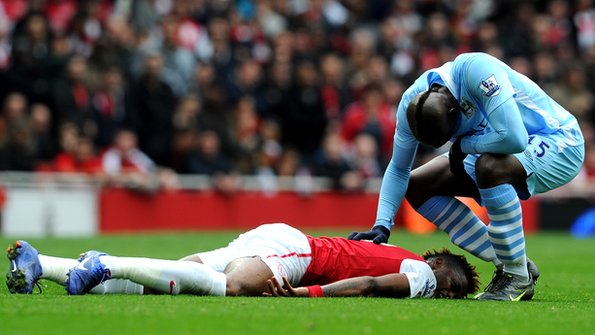 Mario Balotelli, the great enigma, was once more exposed as a liability. Photo: Getty

Arsenal manager Arsene Wenger turned to an old French phrase to predict a United title win as he said: "When a horse smells the stables it is difficult to stop them."

For City, there was only the whiff of resignation at an opportunity lost.

At the heart of it all, with grim inevitability, was Balotelli. The great enigma, whose admirers warm to his generosity of spirit and his relentless capacity to generate headlines, was once more exposed as a liability.

"Why Always Me?" read his famous t-shirt during City's 6-1 win at Old Trafford this season, a question asked days after the infamous fireworks incident at his house.

He has given the answer on many occasions since. Here he proved, once again, that for all Mancini's paternal words and occasional tough love, every week provides fresh evidence to back up Jose Mourinho's message when they were together at Inter Milan, namely that Balotelli is "unmanageable."

Sunday's t-shirt apparently bore the slogan "YOLO" - You Only Live Once - although in strictly footballing terms he lived twice in a game settled deservedly in Arsenal's favour by Mikel Arteta's majestic late strike.

Balotelli was fortunate referee Martin Atkinson was unsighted for a first-half challenge on Alex Song that ran the serious risk of a broken leg for Arsenal's midfield man - but he was not to be denied and subsequently played in a manner that made his eventual red card predictable.

After kicking a goalpost in fury after missing a chance, Balotelli set about Bacary Sagna on more than one occasion before a needless late lunge on the same player brought his dismissal.

There was something almost sad about the sight of this gifted but wayward maverick trudging slowly away with the manager - who has invested so much in him - waving frantically for him to speed up as City's fate was sealed.

The contrast to Arsenal's elation was stark. Goalkeeper Hart kicked the goalpost, coach David Platt clasped his hands to his head while Mancini raged at his team from the technical area, presumably at substitute David Pizarro for his cheap concession of possession.

Mancini spoke candidly about how Balotelli is in danger of wasting his career as he sifted through the damage caused to City's aspirations - not out of sympathy for himself, but for a player in real danger of squandering a wonderful talent.

Balotelli is capable of icy calm and moments of great footballing lucidity, such as ignoring the heat of a Manchester derby to score a goal of composure at Old Trafford or nervelessly converting a stoppage time penalty to win a crucial game against Spurs. 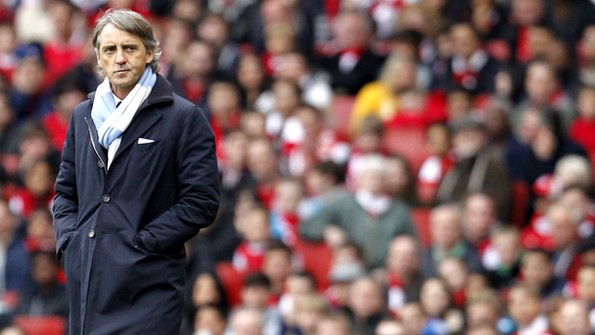 Mancini's handling of Balotelli may be taken into consideration by City's Abu Dhabi rulers. Photo: Getty

Too often, though, Balotelli's dark side surfaces, whether by kicking Scott Parker in the head, coming on in a sulk and getting sent off at Liverpool or bickering with team-mates over a free-kick as he did in the draw against Sunderland.

Throw in the countless off-the-field headlines and, for all his obvious affection for Balotelli, it seems Mancini has reached the point where patience has expired. For all his gifts he is now more trouble than he is worth.

Balotelli's ill-discipline at the Emirates was startling as, having escaped an early sending off, he produced several more studs-up tackles. "He was on the fringe in many situations," said Wenger. "He flirted with orange a few times then got the second yellow."

In the wider context, Mancini's handling of Balotelli may also be taken into consideration by City's Abu Dhabi rulers, with chairman Khaldoon Al Mubarak stern-faced at the final whistle, when they review a campaign that now looks certain to finish empty-handed.

Mancini invested his reputation as well as £23m to bring Balotelli to City in August 2010.

The volatile character was not an unknown quantity to the manager who first encountered him as a 17-year-old and events at the Emirates did not reflect well on his judgement - despite the goals he has added to the side this season.

The Italian insists he is "sure - 100%" that he is the right man to take City forward and pointed to improvements since his arrival, improvements that surely had to be expected given the scale of investment. He will strongly plead his case for more time.

Mancini cut a dignified, brutally honest figure after the game but there can be no hiding from the disappointment facing him and his players.

The spark that illuminated City's season has been extinguished recently, disturbed by the loss of Yaya Toure to the Africa Cup of Nations and a four-game ban for captain Vincent Kompany after his disputed red card in the FA Cup defeat by Manchester United.

And the brightest light of all in the early months, David Silva, suddenly became jaded with Sergio Aguero also looking to be running on empty after his tireless work this season.

In such times Mancini needs men he can count on and yet he was left to make the admission that, even if he was available for the rest of the season, he was unlikely to use Balotelli because he simply cannot trust him to stay on the field.

This statement alone surely signals that his time at City may be coming to an end. This was a day heavy in significance for Balotelli, Mancini and Manchester City.