Revenge, they say, is a dish best served cold. And Chelsea were already preparing one that has been lying at the bottom of the freezer for three years in anticipation of the latest Champions League semi-final meeting with Barcelona.

After the Blues' nervy 2-1 win (3-1 on aggregate) over Benfica in the Champions League quarter-finals on Wednesday, Frank Lampard spoke of "unfinished business" with Pep Guardiola's Catalan artists, while caretaker manager Roberto di Matteo revealed some of his players still felt "hard done by" after their last brush with the Spaniards.

As Di Matteo talked of devising a strategy to cope with Lionel Messi and the magical midfield carousel of Xavi and Andres Iniesta, it was also clear that settling old scores will weigh heavily as a factor.

Those of us present at Stamford Bridge on that balmy - make that barmy - May night in 2009 will understand why the fires of injustice still rage within those players who so nearly toppled a Barcelona side that went on to outclass Manchester United in the final in Rome's Stadio Olimpico. 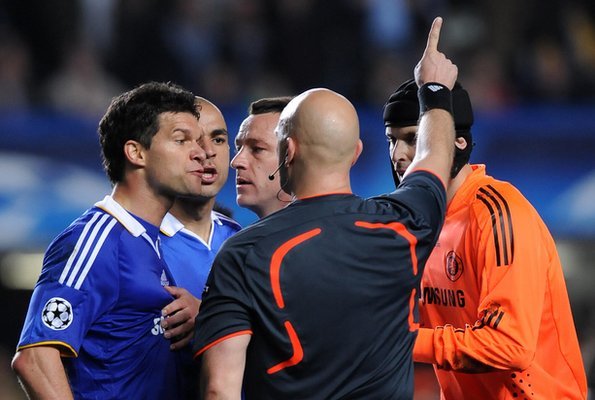 Chelsea felt hard done by at the hands of referee Tom Ovrebo in 2009. Photo: AFP

After a brilliantly disciplined goalless first leg at the Nou Camp, Michael Essien's goal took Chelsea to the edge of another all-Premier League meeting with United until Iniesta intervened spectacularly with seconds left.

It was insult added to the injury of a series of penalty claims, several before and one after Iniesta's goal, all rejected by Norwegian referee Tom Ovrebo.

The hurt has not left Stamford Bridge and it was already starting to spill out after Lampard's penalty and a spectacular Raul Meireles goal - separated by Javi Garcia's late header that sparked a short outbreak of panic at Stamford Bridge - secured the west London side's victory over Benfica.

Chelsea, however, will need to be armed with something more potent than a grievance if they are to somehow find a way past a Barcelona side that look vastly superior to the one in Di Matteo's charge.

Barcelona have improved and won the Champions League twice since the 2009 meeting while Chelsea have gone backwards, but the scale of what Di Matteo and his players have achieved must also be acknowledged and to dismiss their chances out of hand would be disrespectful.

Di Matteo, cold-eyed and businesslike in the extreme after this win, has lost once in nine games since taking over from Andre Villas-Boas.

For Chelsea even to be contemplating this semi-final might have been beyond their sphere of expectation a few weeks ago.

And for all their struggles to get the job done on Wednesday, they will be the envy of Manchester United, Manchester City and Arsenal - not to mention Spurs and Liverpool - when they fight Barcelona for a place in the final.

Chelsea have also reached their sixth Champions League semi-final in nine years, an achievement to admire even if that success has not been transformed into winning the tournament or more than one final appearance.

There is little doubt, though, that they will have to produce performances far beyond anything they have hinted at this season if they are to play either Real Madrid or Bayern in Munich in May.

It is hard to imagine Barcelona coach Guardiola losing sleep over much of what he would have witnessed at Stamford Bridge as Chelsea had to wait until Meireles's spectacular strike in the dying seconds to subdue a Benfica side reduced to 10 men when captain Maxi Pereira was sent off for a second yellow card five minutes before the interval.

Di Matteo made the perfectly understandable assertion that Chelsea must play to their own strengths against Barcelona while being aware of the brilliance they will face themselves - and Benfica were able to flag up a few warning signs.

The Premier League side conceded possession and territory in a manner that suggested they were having a dry run for a confrontation with Barcelona. Benfica were unable to apply the finishing touches to the promptings of the enduring Pablo Aimar, wasting a succession of chances that came their way.

If Aimar, fine player though he is, could have so much influence against the likes of Jon Obi Mikel and Lampard, then what damage will Barcelona be able to do?

It is hard to imagine Barcelona, with Messi at their heart, being as over-generous, although some regular Nou Camp observers claim - to raised eyebrows outside Spain - that they also have a weakness in failing to punish opponents.

Chelsea must perform with iron discipline, tighten up defensively on what was offered up against Benfica and, when the opportunities come, take them.

Di Matteo must decide whether the brawn of Didier Drogba can be used in the hope of reawakening the beast to bother Carles Puyol and Gerard Pique or whether the speedier thrusts of Fernando Torres would be Chelsea's best bet.

Drogba was one of those most publicly wounded by Chelsea's exit against Barcelona in 2009, marching on to the turf at the final whistle after being substituted, clad incongruously in flip flops, to confront the officials before making his feelings clear via a television camera.

If Di Matteo can use any tool to drag one more great performance from the striker who has so often been Chelsea's Champions League talisman then their chances will be greatly improved.

They must also wrestle with a fixture schedule that sees an FA Cup semi-final against Tottenham at Wembley and a meeting with Barcelona in swift succession while a fight for a place in the Premier League's top four goes on.

And Chelsea may also believe that they are due a change of fortune in a tournament that has thwarted Roman Abramovich's mighty chequebook at every turn, whether it via a "ghost goal" at Liverpool, a penalty missed in Moscow or officialdom against Barcelona.

They will certainly need luck on their side against the Catalans because all logic - and all footballing evidence this season - suggests their Champions League journey will come to a halt at the semi-final stage.

All the cards will need to fall in their favour and they must produce a pair of their finest performances in recent memory to reach another final. The desire for revenge alone will not suffice.