Harry Redknapp may have been in his trademark pose, conducting interviews out of an open car window many miles away - but in spirit he was almost in the room with the Football Association's delegation at Wembley.

Fabio Capello's decision to quit as England manager brought the world's media to FA headquarters as chairman David Bernstein led the response with a detailed timeline of four hours on Wednesday that ended with the Italian walking away from his £6m-a-year post.

And throughout what was a measured response, Tottenham manager Redknapp played the part of the elephant in the room. 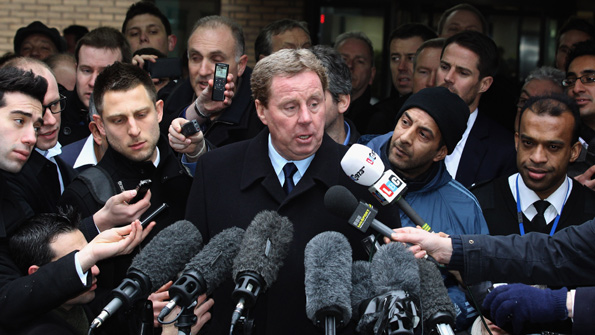 The current wisdom is that there are now no obstacles to Redknapp becoming Capello's successor. He has been cleared of tax evasion - and decks and diaries have been cleared at the FA as Friday morning marks the start of the process to find the man to take England to Euro 2012.

The route to Capello's resignation was, in many respects, a peculiarly modern one. The catalyst was a Youtube clip followed by allegations that the then England captain John Terry made racist remarks to QPR's Anton Ferdinand, charges he denies.

Capello's very public disagreement with the FA board's decision to strip Terry of the captaincy then led to his departure and a fast-moving bandwagon backing the installation of Redknapp, heavily portrayed as the people's choice.

The chain of events moved with such speed that Bernstein was forced into a powerful defence against charges from the assembled media that the FA had allowed chaos to cover English football months before a major tournament.

To lose a manager in such circumstances may be regarded as careless, but there is a growing school of thought that the FA has actually been presented with an unexpected opportunity to land on its feet.

Even Bernstein, despite having to explain the disappearance of a manager at such a crucial stage, unwittingly hinted at such thinking when he said: "We are actually in a much better place than we appear to be."

For all the dignified words from both the FA and Capello, there did not appear huge regret from either party. Bernstein and his FA cohorts met Capello for an hour on Wednesday to discuss recent developments, gave each other an hour's thinking time and then came to the parting of the ways.

Redknapp, looking tired but relieved as he gazed out of that familiar rolled down window, insisted he had not thought about England. But the rest of England, it seemed, was thinking about him and inside Wembley it was no different.

If he had strayed into Bernstein's thoughts, the FA chairman was keeping it to himself - at least until he gets behind closed doors with Club England managing director Adrian Bevington, director of football development Sir Trevor Brooking and FA general secretary Alex Horne on Friday.

Bernstein delivered a slight smile when Redknapp's name was finally mentioned before producing the sort of straight bat that would have been the envy of Geoffrey Boycott.

Will England's next manager be English? "He will not definitely be English but we do have a preference for an Englishman."

Inside and outside Wembley, where foreign television crews unable to gain access asked passers-by for a crash course on Redknapp, the Spurs manager seemed to be the only name in the frame.

The timing of approaches and appointments remained unclear, but as Bernstein outlined the qualities required to take over from Capello the image of Redknapp - already beaming from many television screens inside Wembley - came into even sharper relief.

Bernstein stressed: "There is a preference for an Englishman or a British person, but at the end we want the best person so we don't want to rule out anyone. At this stage an English or British person would have a good start."

He added: "I imagine that any manager would have detailed knowledge of English players. I would expect an experienced top man would be able to pick up the reins very quickly. So while it won't be today, we will be in a good place in quick time and the new manager of course will make his own call on the captain."

Providing his choice is not, of course, John Terry.

Redknapp, with the public support of players such as Wayne Rooney and Rio Ferdinand, is currently being carried along on a wave of public and professional goodwill. Bernstein admitted the feelings of fans will be considered but will not automatically drive Redknapp into Wembley.

And as Bernstein reeled off the characteristics required by the man who will occupy Capello's old office, ticks appeared alongside Redknapp's name.

The mood music around Wembley struck a serious chord but hardly a sombre one. Bernstein was respectful to Capello - although he revealed telephone conversations with the Italian, whose command of the English language was not the greatest, were "not the easiest".

He stressed, in the light of Capello's public insubordination over Terry on Italian television, that this was a time when the FA "had to step up to the plate when strong leadership was required". He did not believe mistakes had been made, either in hiring Capello or in the manner of his leaving.

Indeed, he delivered what may come to be regarded as Capello's England managerial epitaph when he said: "It was certainly expensive but it wasn't a mistake."

With Sunderland's Martin O'Neill emphatically ruling himself out, genuine rivals to Redknapp appeared in short supply.

Guus Hiddink, as ever, was mentioned while West Bromwich Albion's Roy Hodgson got the vote of some traditionalists - although his chances appear remote, especially after his harrowing experience at Liverpool.

So on Friday morning, four men will gather to formulate the short-list of potential successors. Inside Wembley on Thursday it seemed many had already reduced the list to one man.