Harry Redknapp could not make it but Fabio Capello did. Luis Suarez, the man all Liverpool supporters came to see, arrived late but still had enough time for another brush with authority and headlines.

The stories and sub-plots proved more intriguing than a match that failed to deliver on its promise of entertainment as Liverpool and Tottenham played out a 0-0 draw that did not serve the purposes of either side.

If England coach Capello was seeking a low profile away from his public disagreement with the Football Association over its decision to depose his captain John Terry, he failed to find it at Anfield. 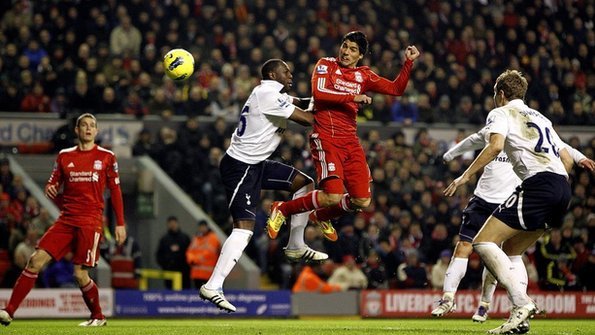 Suarez had an opportunity to give Liverpool the lead but couldn't find a way past Brad Friedel with his header. Photo: Reuters

After proving far less communicative with the English media than he was with Italian television station RAI, making no comment whatsoever as he swept into Anfield, Capello arrived in the directors' box to be greeted by a battery of photographers with lenses trained on his every move.

And once the Italian had taken his seat, the cameras switched their attention to Suarez, back on duty as a substitute for Liverpool after a nine-game absence that covered misconduct for a gesture towards Fulham fans at Craven Cottage and being found guilty by the FA of racially abusing Manchester United's Patrice Evra.

With Spurs boss Redknapp restricted to a night in front of his television after his flight to Merseyside failed to leave London's City Airport, it was not long before a match short on quality had Anfield calling for their hero Suarez.

The Uruguayan started the day by offering up a tweet announcing "Por Fin Llego El Dia!" - "Finally The Day Came". He ended it getting a reply from Wayne Rooney after a hefty kick to Scott Parker's midriff brought him a yellow card from referee Michael Oliver only three minutes after coming on as a 66th-minute substitute.

Rooney was on the case quickly and with a tone that may set the mood ahead of Liverpool and Suarez's visit to Old Trafford on Saturday.

"If the ref sees that kick from Suarez and books him for it, it should be red" announced Rooney.

Liverpool manager Kenny Dalglish has never been slow to defend the forward and was also in defiant mood when he flatly refused to back away from his support for Suarez.

He once again cast public doubt on the FA's decision to punish Suarez when he said after the game: "It's fantastic to have him back. He should never have been out in the first place."

Not exactly acts of diplomacy from Rooney or Dalglish. It will not be a quiet Saturday lunchtime a short walk from Salford Quays.

Suarez is one of those figures who will have headlines as a companion throughout his career.

In a 24-minute cameo he announced his arrival by pinching the ball off Benoit Assou-Ekotto, flattened Parker with a wild swing of his foot that could have drawn a red card, railed against decisions from referee Oliver with some high-class theatrics and almost won the game - indeed should have won the game - with a late header he could only direct at Spurs goalkeeper Brad Friedel.

Suarez may be high maintenance but Dalglish obviously believe he is worth it. Liverpool certainly need a touch of extra inspiration from somewhere after their eighth draw at Anfield in the Premier League this season.

Suarez has a dash of the unpredictable, the wild card, about everything he does. This has, and will, court controversy but he also has that match-winning capacity - although his finishing is not as reliable as it should be for a player of such natural gifts.

As so often this season, Liverpool had possession and fashioned chances but failed to take them. It may yet be a flaw that costs them a place in next season's Champions League.

Spurs may have to settle for that achievement as they nestle comfortably in third spot - seven points ahead of fourth-placed Chelsea but seven points behind leaders Manchester City. 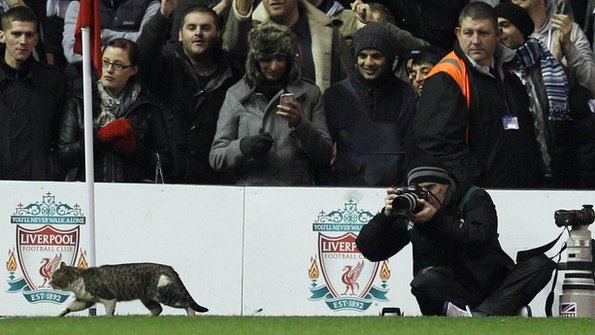 The pitch invasion of the cat was probably the highlight of a dull first half. Photo: Reuters

And yet, as Redknapp fulfilled his role as reluctant spectator, he will have found much value in the organisation, resilience and discipline demonstrated by his side. The old argument about being a soft touch on their travels has been redundant for years but there was still something illuminating about the way Spurs set up to contain Liverpool.

Indeed they could even have pilfered what would have been a fortuitous victory had Gareth Bale not been blocked by the legs of Liverpool goalkeeper Pepe Reina when clean through six minutes from time.

It was all watched, typically stone-faced, by Capello as he prepares to meet FA chairman David Bernstein in an attempt to mend some broken bridges later this week. And if he is training his thoughts on Euro 2012 as opposed to picking a fight with his paymasters, he will have found plenty to occupy his mind.

Scott Parker, a possible captain in the eyes of some, although Liverpool's Steven Gerrard is the firm favourite, worked tirelessly in midfield. He took the knocks from Suarez and dished a few out, particularly when he was booked for fouling Gerrard and was generally in the business-like mood that has transformed Capello's view and made him part of England's plans.

Gerrard himself was subdued but Glen Johnson performed well as an emergency left-back and Michael Dawson was a towering figure in Tottenham's defence, tackling with perfect timing and throwing his body on the line alongside the impeccable Ledley King.

Spurs may not win the title this season but they are a side of substance.

They were missing the attacking drive of Rafael van der Vaart, Aaron Lennon and Jermain Defoe but still took a point at a difficult place.

There was a sense that the script was written for Suarez, back for the first time since Boxing Day, to make the decisive impact after his return from FA-imposed exile. But Liverpool's wastefulness and Spurs's refusal to yield denied Dalglish the ending he would have craved for his team and the player he treats with something akin to adoration.