The great old champions often play from memory in moments of crisis, recalling the spirit that brought success to defy the odds and defeat. It all came flooding back to Manchester United for 40 minutes at Chelsea.

If Manchester City need reminding, and it is unlikely they do, that they take their eyes off their neighbours from Old Trafford at their peril in these decisive Premier League months, then let events at Stamford Bridge be their lesson.

Sir Alex Ferguson rails at the very suggestion that this is not a vintage United side, not a team that stands true comparison with the previous great monuments to silverware that he has assembled.

The fact that they are current Premier League champions adds weight to his argument, but study personnel, performances and current Champions League pedigree and it is a truth he may have to accept, even if it is done with fierce reluctance.

Yet when United drag themselves back from a three-goal deficit as they did in the second half at Stamford Bridge, they still present all the evidence needed that City - or anyone else for that matter - will have to drag this title from their dead hand. 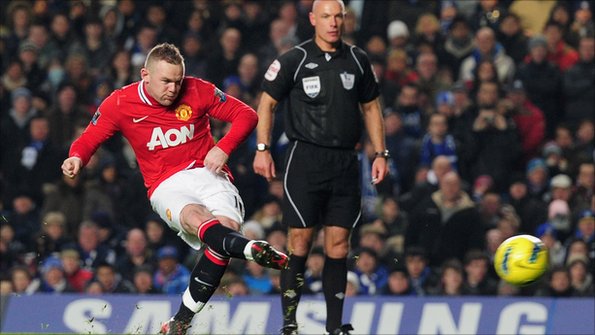 Chelsea's fans were thinking humiliation as opposed to parity when goals early in the second half from Juan Mata - beautifully constructed by Fernando Torres and thunderously finished - and David Luiz added to Jonny Evans' first half own goal and had manager Andre Villas-Boas doing a military march along the touchline in celebration.

But from the moment Wayne Rooney's penalty put United back in contention, old instincts that come directly from their manager kicked in as if part of their DNA.

It is also a dual effect. The speed with which Rooney made his way back to the halfway line after converting his spot-kick was testimony to United's renewed belief and also instilled nerves in a Chelsea side made even more fragile by the absence through injury of deposed England captain John Terry, as well as Frank Lampard and the suspended Ashley Cole.

Ferguson may not like to swallow the hard truth that this is not one of his finest teams, but what it has - what all the Scot's sides have had - is the inner belief that even the most hopeless situations can be retrieved in a game that operates on such fine margins.

Plenty will point to referee Howard Webb's award of two penalties as giving United a timely leg-up. The first, when Patrice Evra was fouled by Daniel Sturridge, was an open and shut case, while the second appeared more at Danny Welbeck's instigation when his leg made contact with Branislav Ivanovic rather than the other way around.

Even in United's current reduced circumstances with injuries hitting hard, there was a certain inevitability about Javier Hernandez's late equaliser. The big picture may suggest two points lost but circumstances actually make it one gained - and one that may prove crucial when the final count is made.

Ferguson virtually spat out the word "character" in his post-match analysis and he was right to do so. United have been criticised in plenty of places this season, including here, but this was a real show of fight and should not be diminished by the carping (understandable in relation to the second penalty) of a desperately frustrated Villas-Boas.

It was a thrilling second half when set against a poor first - with the Football Association's decision to sack John Terry as England captain providing a permanent backdrop. 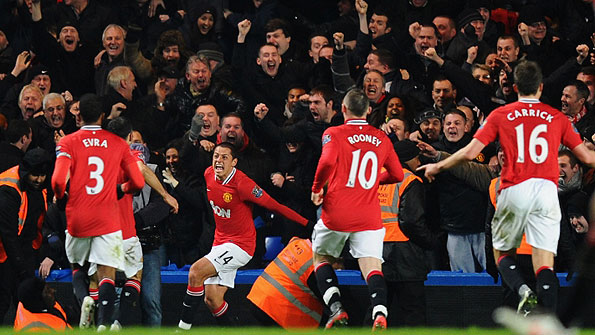 Chelsea's supporters chanted their support with "There's only one England captain". United's Rio Ferdinand, in turn, unfortunately suffered abuse by association, both as a man once appointed to succeed Terry as his country's skipper and also as brother of Anton, the player the Chelsea defender will stand trial accused of racially abusing - and for which he has entered a plea of not guilty.

Stronger Chelsea teams than this - dare it be said, those that operated under Jose Mourinho - would never have relinquished such an advantage, but United's reaction to pulling one goal back suggested they sensed frailty in this modern Chelsea.

Paul Scholes, introduced as substitute, pulled the strings with his wonderful range of passes and such was the shift in momentum that many inside Stamford Bridge expected a United win once they restored equality.

It was actually Chelsea who almost made the decisive late push in the closing moments - and when they did United found another hero in the shape of derided keeper David de Gea.

Criticised, justifiably, after a feeble and nervous performance in the FA Cup defeat at Liverpool, he ensured United's recovery was not cast aside with one truly magnificent athletic stop from a Mata free-kick that was guided towards the top corner and another acrobatic tip over from Gary Cahill's powerful drive.

De Gea still lacks presence in his area and has an odd tendency to go for balls with his feet when his hands provide a perfectly serviceable alternative, but the save from Mata in particular was of the very highest calibre measured in agility and shot-stopping.

There has been talk of the contrast between Peter Schmeichel and Edwin van der Sar winning points and saving games for United and De Gea losing them, but here the young Spaniard protected a point and gave Ferguson room to insist this is why he was willing to pay Atletico Madrid £18m to secure him.

At the very least it was an incident that should repair some of De Gea's confidence, which looked broken at Anfield.

It was also the signal for a little psychological warfare aimed in City's direction by Rooney, a tactic his manager will no doubt dust down should they keep their fierce rivals in their crosshairs for another couple of months.

"We fought well and that point could win us the league," said Rooney. "You can also see it as two points lost - we understand that - but, after being 3-0 down, all the City players sitting there at home won't have enjoyed watching us recover, the way we fought back and the spirit of the team.

So we will pick at United's flaws, question the all-round quality and make unflattering comparisons with the past. What we will not do is write them off as a going title concern.

And if there is one second when City are tempted to do so, they should remember the final 40 minutes at Stamford Bridge.