"Why Always Me?" was the question posed on the T-shirt revealed by the human headline generator that is Mario Balotelli after he silenced Old Trafford's Stretford End in October's Manchester derby.

The 21-year-old Italian had scored City's first goal in the 6-1 rout of their neighbours and Premier League champions on their own turf just days after igniting part of his house with an ill-judged attempt to set off fireworks from the bathroom.

Balotelli was demonstrating an endearing ability to laugh at his own misfortune and turbulent personality. Pretty much everyone - United fans apart - laughed with him.

Sadly, for those who embrace the arrival of this wonderfully gifted young maverick to the Premier League there will be days when Balotelli is no laughing matter. And smiles were impossible to find among the Tottenham contingent at The Etihad on Sunday. 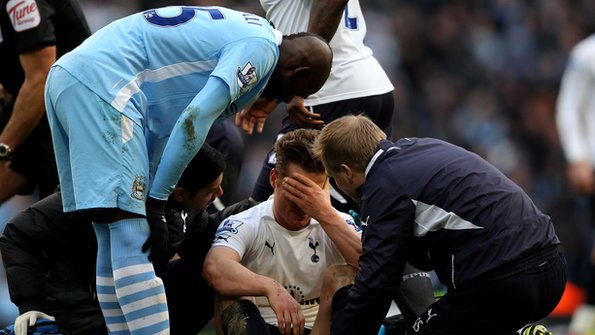 The pain of losing to Balotelli's penalty deep into stoppage time after clawing back a two-goal deficit was bad enough in isolation. The fact that Spurs felt he should have been sitting in the dressing room as opposed to winning the spot-kick via Ledley King's foul before scoring it only added insult to injury.

Spurs manager Harry Redknapp's eyebrows shot north at an alarming rate when it was suggested that Balotelli's image was mainly that of a "lovable eccentric" - before graphically condemning an offence pretty much everyone who saw it felt warranted a red card.

Balotelli, on as substitute for Edin Dzeko, had already been booked for a foul on Benoit Assou-Ekotto when a routine tussle involving Scott Parker brought an initial accidental collision between his leg and the Spurs midfield man's head.

Only Balotelli will know the full scale of his intent in their second coming together, but it looked an altogether more sinister kick at Parker, leaving his opponent nursing a head wound and Spurs an obvious sense of grievance. He pleaded his innocence, with more generous souls suggesting it was simply an attempt to regain his balance gone badly wrong.

Referee Howard Webb took no action, leaving Balotelli free to win this vital game for Manchester City, who looked like having to settle for an unsatisfactory point after goals from Samir Nasri and Joleon Lescott were levelled up by Jermain Defoe's opportunism and a world-class Gareth Bale strike.

All Mario's life was here: The villain and the hero. It is the back story of his career and all evidence suggests this will be the constant narrative that could give T-shirt sellers a roaring trade for the next decade.

Balotelli represents the classic football dichotomy. The T-shirt was more or less a public admission of the chaos that characterises his life and career - and yet amid this chaos there is an ice-cool streak of composure that is completely at odds with this side of his personality.

Go back to the moments before he showed off his T-shirt at Old Trafford. Balotelli had scored the most perfectly executed passed finish beyond David de Gea amid the heat of a Manchester derby. It was not the act of a hothead but of a quick-thinking, calculating football mind.

And for someone whose previous behaviour suggests an inability to cope with pressure points or moments of confrontation, there was remarkable serenity in the defining moments of victory against Spurs.

For all the antics, Balotelli was calmness personified when it came to converting his spot-kick. Photo: Getty

With 20 seconds left, Balotelli was calm itself as he accepted responsibility for City's late penalty, with the Etihad fuelled by a cocktail of anxiety and expectation, before drilling a nerveless spot-kick past Brad Friedel for three points manager Roberto Mancini may treasure at season's end.

These are the moments Mancini accepted as the price on the ticket when he paid Inter Milan £24m to sign the youngster he knew so well in August 2010. He knew Balotelli was the highest of high-maintenance individuals but if high-maintenance also brought that title-winning edge he was willing to shoulder the burden.

Mancini's relationship with Balotelli is almost like father and son. The moments of exasperation are worth it for the joy he occasionally brings him and both have been offered up in equal measure.

The myths and legends have built up around Balotelli almost from the moment he arrived in Manchester. The lines between fact and fantasy have become increasingly blurred, with Mancini recently having to deny - with a smile on his face - claims that his player had been out on the streets of Manchester dressed as Santa Claus dispensing cash to passers-by.

There were even rumours that he had paid for those less fortunate than himself to use a luxury city centre hotel over the festive period. Earlier this month he parked his Bentley outside a Manchester school and popped in to use the toilet.

All good knockabout stuff, but it is on the field that the wisdom of Mancini's decision will be measured. There are no questions about his talent but plenty about the fragility of his temperament.

Balotelli was sent off, harshly in the view of most observers, at Liverpool in November but the red card was the culmination of an 18-minute appearance as substitute during which he appeared an almost unwilling participant in events, such was his obvious lethargy.

He suffered the ultimate humiliation at Anfield last season when he was so poor as a substitute that Mancini substituted him. And yet inside this complex, enigmatic figure lies a rare talent which his manager feels makes him worth all the time and trouble.

Balotelli is loved at the Etihad, a languid attacking contrast to the busy, world-class Sergio Aguero and the giant Dzeko. In among all the talents assembled by Mancini, Balotelli is the most combustible and unpredictable, but also an undoubted match-winner.

He can be a spectacular Premier League presence, the wild card who could help City claim the title for the first time since 1967/68. He is a godsend for those of us who observe in the media, for good and bad.

But there is a line that he can be tempted to cross, either by opponents willing to test his temperament or simply his own, occasionally wayward, approach. This is when the laughter and the indulgence will stop.

Balotelli might win City the title but there's a danger his unpredictability could potentially lose it for them.

Redknapp and Spurs were in no mood to see the funny side among the many sides of Mario Balotelli as they left Manchester feeling robbed of a point they believed they deserved. Why always him?