Craig Bellamy never had a price tag to justify when he returned to Liverpool from Manchester City in August - only a score to settle with himself after one previously unfulfilling season at Anfield.

When Bellamy left for West Ham United in 2007, his departure was largely met with the indifference reserved for a player who had given it his best shot at the club he loved but came up short.

In fact Bellamy's best shot is often remembered as the one he took at then team-mate John Arne Riise with a golf club on a team-bonding trip before a Champions League game in Barcelona, though differences were spectacularly settled as both scored in Liverpool's subsequent win at the Nou Camp.

So when Kenny Dalglish took advantage of Bellamy's broken relationship with Manchester City manager Roberto Mancini and offered the 32-year-old the opportunity to finish old business in the final hours before the transfer window closed, it was a deal without a downside. 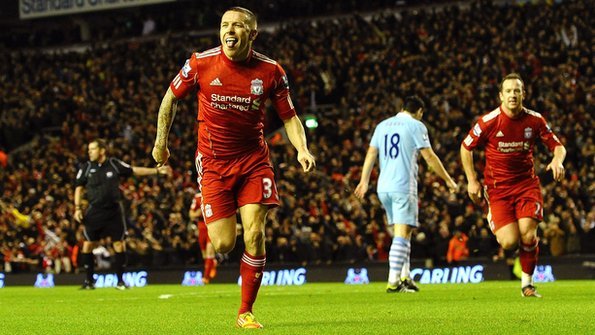 Dalglish strengthened a key area in his squad without having to dip further into the pockets of Liverpool's American owners and in return he got a striker bursting to take this unexpected second chance.

If this was effectively a free present from City to Liverpool, it is the gift that keeps on giving and its latest offering was the inspiration behind the club's return to Wembley for the first time since 1996 after an enthralling Carling Cup semi-final second leg.

Anfield reverberated to the sound of appreciation for Bellamy when he was substituted in the dying seconds of this 2-2 draw, 16 minutes after providing the highlight of an outstanding individual performance with the goal that took Liverpool back to the scene of old triumphs.

Bellamy not only took his latest club a step closer to ending a trophy drought stretching back to 2006, he punished the manager who made it clear there was no place for him at his evolving Manchester City.

The recent criticism aimed at Dalglish, and which he turned on his players after their lamentable display in defeat at Bolton on Saturday, has homed in heavily on the price he has paid to bolster his squad.

Andy Carroll, at £35m not even in Liverpool's starting line-up, Stewart Downing, Charlie Adam and Jordan Henderson have been subjected to varying degrees of scrutiny, as has Dalglish's use of funds provided by the Fenway Sports Group.

No-one can question the wisdom of the late deal to bring Bellamy back for another spell as he once against showed this has all the hallmarks of a move that will soon be viewed as a masterstoke.

It was not simply Bellamy's bursting energy or his non-stop nuisance value, it was the quality contained in his performance summed up by the decisive goal past world-class City keeper Joe Hart, who was in such prime form that it was going to take a strike of fine creation to beat him.

Bellamy gave the lie to the theory that dodgy knees make it impossible for him to play two games in a week and it would be a brave decision by Dalglish to leave him out of a third when Manchester United arrive at Anfield for an FA Cup fourth-round tie on Saturday.

He was still running with some vigour long after the final whistle, one of the last players to end an energetic warm-down in a deserted, rain-lashed Anfield.

City made a fight of it, twice taking the lead through Nigel de Jong and Edin Dzeko, only for Steven Gerrard's disputed penalty, given after Micah Richards unwittingly blocked Daniel Agger's shot onto his hand, and Bellamy's late strike to settle the issue.

Dalglish celebrated each goal with the trademark raised hands and beaming smile of his playing days - and even seemed a little emotional when referee Phil Dowd sounded his final whistle.

Over the two legs Liverpool were the better side. One glance at the worksheets of the respective goalkeepers told the tale on Wednesday. Hart was stretched throughout whereas Liverpool counterpart Pepe Reina did little apart from pick two goals out of his net.

The first serious doubts about Dalglish's return to Liverpool have been expressed during a recent frustrating run, but he knows better than anyone that silverware cures most ills and silences most critics.

This is not to suggest the questions were not valid. They were and no-one can mount a serious argument against the assertion that many of Liverpool's signings must do better, but a place in the Carling Cup final will settle the worries.

Liverpool may not yet be in shape to finish in the top four, but a trophy will keep the wolf from the door for a while yet and they will be heavy favourites against Cardiff City next month.

The Carling Cup dropped off Liverpool's radar in the years when the Champions League was on the agenda. The club, not so long ago, had bigger fish to fry but there will be no shortage of celebrations should Cardiff - and they have shown more than enough to suggest they will be dangerous - be beaten.

It is the opportunity, as Arsenal fans might tell you, to make a start after a period without success and offer up tangible evidence that Dalglish is doing something right. It is not the game's major trophy but is not to be sniffed at when you have gone through a period without one.

The Carling Cup is important to Liverpool as a potential trophy and as a showcase - not justification - for Dalglish's work.

And Dalglish has made it his business to have a serious crack at the Carling Cup. He has fielded strong sides from the early rounds and through away draws against Exeter City, Brighton, Stoke City and Chelsea. He has treated the competition with respect.

For City boss Mancini, once more bemoaning what he regarded as a poor refereeing decision, his attention will now be focused even more sharply on winning the Premier League.

How he will look forward to the return of captain Vincent Kompany after suspension. Mancini juggled his defensive formation, playing a three-man central formation perhaps designed to help the uncertain Stefan Savic.

It was a ploy that failed as Savic, a bag of nerves, was removed for his own good after 45 minutes and more normal service resumed.

This was a night that belonged to Liverpool and Dalglish could not resist suggesting that if Mancini had any more players like Bellamy that he did not want, he hoped he still had his telephone number.

After Mancini saw the player he pushed to the margins come back to haunt him, Dalglish should not expect a call any time soon.