Questions for Dalglish after another Anfield draw

Kenny Dalglish sat at Anfield and told the same old story - but it was a tale that had a happy ending for Blackburn Rovers manager Steve Kean.

When Kean spoke defiantly above the din of hundreds of protesting Blackburn Rovers fans following Tuesday's home defeat to fellow strugglers Bolton, few would have risked their wages on him still taking charge at Liverpool on Boxing Day.

And yet there he was, celebrating a point earned gallantly on the back of defensive discipline and some stoppage-time miracles as the critical spotlight switched to Dalglish after a sixth Anfield draw this season.

Dalglish has written a golden chapter in Blackburn's history by winning the Premier League at Anfield in 1995. Kean sharing the spoils on the same territory does not even register a dot when set against that scale of achievement, but his sense of satisfaction and elation was understandable. 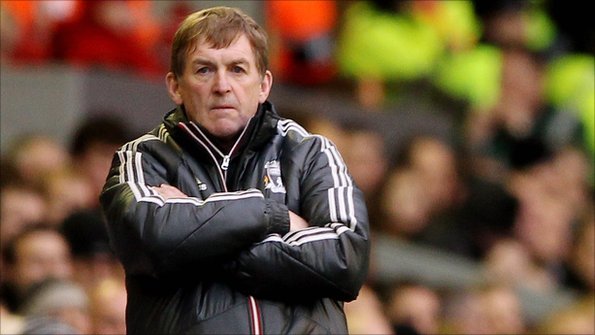 Kean was even able to experience that rarity of hearing applause from Blackburn's fans at the final whistle - not for him of course, but far distant from the abuse that has been his constant companion this season.

In recent weeks I have watched Blackburn visit Sunderland and Liverpool, and not once did their players give off the unmistakeable air of a squad that has lost faith in their manager. This does not offer any sort of guarantee about Kean's long-term future, but it is certainly a point in his favour.

It is still almost impossible to see how Kean can shift public opinion back in his favour after it has turned so savagely against him, but on this day he deserved the respite a 1-1 draw gave him.

When Maxi Rodriguez levelled after the own goal from Charlie Adam that gave Blackburn an unlikely lead, both Kean and his players could have been forgiven for feeling the tide had turned against them.

And yet, even in the face of a barrage of sorts from a disappointing Liverpool, they stood firm but still had to thank goalkeeper Mark Bunn for a magnificent save from Andy Carroll and Adam Henley for a goalline clearance from Daniel Agger in the final 20 seconds.

Blackburn had relief and overdue illumination from the darkness that has engulfed this fine old club. Liverpool and Dalglish were left to accept they had come up short at Anfield once more, not just against Manchester City and Manchester United, but also against Sunderland, Norwich, Swansea and now the Premier League's bottom club.

Dalglish's argument about ill-fortune, the defiance of opposing goalkeepers and a failure to reap deserved rewards carries some merit, but starts to lose its legs when it happens on such a regular basis.

He is coming up to the first anniversary of his return to Anfield as manager following Roy Hodgson's sacking - a year that has seen an undoubted improvement in the style of play via a return to old values and a sense of unity coming back to a club that had been fractured for so long.

This does not mean, however, that his work can escape questions, especially when he has spent funds so lavishly on attacking resources and Liverpool have failed to score twice at Anfield since the victory against Wolves in September.

And one question in particular irks Dalglish - a question he was again asked in the aftermath of another unfulfilling afternoon for £35m striker Andy Carroll. He may not like the question, but it will not go away until the giant Geordie at least hints at riches - not to mention value for money - to come.

"Unbelievable" was Dalglish's response to being asked to deliver an assessment of Carroll's performance. And yet it remains a valid query.

Carroll should have scored with a chance from only eight yards in the first half and was only denied the status of match-winner by Bunn's late brilliance. Such are the fine margins of operation at this level.

And yet too often his positioning and reactions seem awry, too often this season he has been attacking the important moments from a standing start. Dalglish has delivered his complete public confidence in Carroll - now he must transfer it to a striker who is clearly struggling to make an impact.

With Stewart Downing continuing to be a hit-and-miss affair, Liverpool and their supporters are still waiting for £55m worth of attacking talent to make their mark and the statistics prove something is absent that Dalglish will need to address next month.

Luis Suarez's performances have deemed him an unqualified playing success, and yet for a footballer of such prowess his finishing is too often wayward. Four times in the first 20 minutes he finished with varying degrees of inaccuracy, none on target.

He was perfectly described by one press-box sage as "Liverpool's ideas man rather than the one you want to deliver the finished product". The Uruguayan has abundant natural gifts, but on the evidence of his season so far, ruthless finishing is not among them.

In boxing terms Liverpool have all the moves and a stout defence, but at Anfield at least they struggle to punch a hole in a paper bag. Blackburn and Bolton have both scored more Premier League goals this season than Dalglish's side - a stark statistic for a team aiming for the top four.

Dalglish is unswerving in support of his players but it will not blind him to the reality of the heavy price of lost points at home. And Liverpool are losing too many.

Kean, buoyed by this point, set his sights on four January signings. Whether he is still at Blackburn to make them, and whether he actually gets the backing from owners Venky's to sign the quartet if he is, is a story for another day.

Dalglish does not need such reinforcement in numbers after his summer transfer activity and with captain Steven Gerrard back for a 22-minute cameo following his latest injury problems, but the growing body of evidence at Anfield suggests he still has to find a missing link.