Like two bald men fighting over a comb, Manchester City and Manchester United have been left to battle for European football's scraps after a Black Wednesday in the Champions League.

When City and United set off on a season of high ambition, little did they realise they would be inviting the unwelcome guest that is the Europa League into their itinerary before the turn of the year.

And yet that is the bleak prospect facing two clubs who dine at the Premier League's top table after they failed to negotiate their way out of the Champions League group stages and into the lucrative knockout phase.

City's demise was disappointing but not a major shock, despite the non-consolation victory against a depleted Bayern Munich at the Etihad Stadium. Their fate was sealed by the earlier defeat in Germany allied to a home draw and loss to Napoli.

Roberto Mancini's side, for all the big spending and vast reconstruction, were also handed a taxing draw alongside Bayern, Napoli and Villarreal. They look certainties to be back next season when these experiences will be put to good use and the current squad is likely to have been augmented by more marquee arrivals.

For United, however, there will be genuine embarrassment as well as anger at their inability to qualify from a group Sir Alex Ferguson might have hand-picked himself when the draw was made. 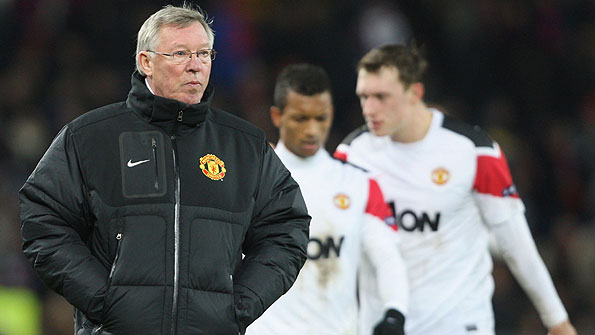 Ferguson's United must now be content with a place in the Europa League. Photo - Getty

When United were placed with Benfica, Basel and Romanians Otelul Galati, second place would have been considered a let-down, let alone the abject humiliation of a third-placed failure and the ignominy of the drop into Europe's second tier.

United's only wins came against the Romanians. Two games with Benfica were drawn, a point was rescued in the dying moments of a chaotic 3-3 draw with Basel at Old Trafford - and then, when only needing a point to salvage those poor performances in the group with qualification, they could not even manage that as they lost 2-1 in Switzerland.

Now they go into a tournament that would not have registered on the radar of anyone at Old Trafford until the final whistle blew in St Jakob Park. Defender Patrice Evra pulled no punches as he said: "It's embarrassing to play in the Europa League."

As City's players left the stage after beating Bayern, there was a mood of resignation that was almost over-riding the disappointment. Such has been the speed of their journey, fuelled by Abu Dhabi's petro-dollars, that there was an acceptance that this setback was simply part of a long-term education.

Mancini can absorb the lessons and regard the Europa League, no matter how it is viewed elsewhere, as an opportunity to win another trophy. It will not be a priority but City have the strength of squad to make a go of it.

It will also allow City to shape their European game, which has been found lacking during their first taste of the Champions League. To go out at the group stage was hardly a cause for rejoicing but the mood among the club's followers was philosophical.

For United, the emotions were on a different, more psychologically damaging scale. To fall at the Champions League's final hurdle after failing to beat Barcelona is one thing, to miss qualification because of a failure to beat Basel is another.

It underscores the scale of United's decline in Europe since that Wembley night when they were outclassed by Barcelona - and how Ferguson himself has failed to learn the lessons of defeat.

To go from three Champions League finals in four years to an exit from an inviting group is the stuff of nightmares for the Scot, who last failed to guide United into the knockout stage in 2005-2006.

They say it is never too late to sample new experiences - but to be turning his attentions to the Europa League as he prepares to celebrate his 70th birthday later this month is an unwanted gift for Ferguson.

And after developing a rich palate in the Champions League, it is hard to see how the tournament regarded as its poor relation will be to the taste of Ferguson, United or their fans.

The only use United's supporters have ever had for the Europa League has been as a stick to beat their rivals who were in it. United, in their eyes, have never been bad enough to qualify for it.

Now they are and Ferguson himself must take blame as well the players who have played so poorly in the group games.

In the aftermath of another chastening defeat from Barcelona, coupled with Paul Scholes's retirement, one glaring problem needed to be addressed. United lacked the highest quality in central midfield, and yet Ferguson allowed it to go untouched.

Samir Nasri was coveted but United were muscled aside by Manchester City's finance, while Old Trafford officials insisted there was never any serious interest in Inter Milan's Wesley Sneijder. 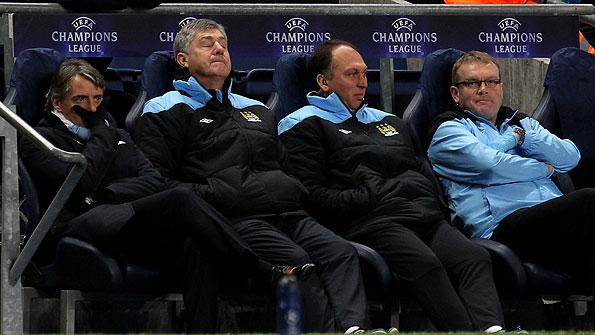 With Luka Modric tied to Tottenham, Ferguson made do and mended. Phil Jones was used in central midfield and, in a desperate sticking plaster moment, Wayne Rooney was also used. The latter was almost an admission of defeat.

The lack of a player of that calibre - and it has been mentioned many times before Wednesday's exit - has cost United dearly. Ferguson insisted he could not find value in the market, but such an acquisition may have helped United enjoy the riches of the later stages of the Champions League once more.

United are further away from Barcelona today than they were in May, while Jose Mourinho is again working ominously at Real Madrid. Ferguson must now find his midfield master, having always insisted he has the finance to do expensive deals despite the suspicions some United fans have towards the club's owners, the Glazers.

Flaws were in evidence even during an early rampage this season and the failings have been picked at in Europe and the consequences have been dire.

There will be a real hangover around Manchester on Thursday, but the thickest heads will be at Old Trafford because they will not have seen this one coming. Indeed Ferguson, it should be recalled, laughed in the face of a suggestion United were "struggling" in the Champions League after they drew with Benfica at Old Trafford.

Ferguson has now had two almighty shocks this season, the 6-1 home defeat by Manchester City and the notion of seeing his Thursday evenings disturbed by the Europa League.

Before the home game against Basel in September, Ferguson claimed the Champions League was the best competition in the world, ahead of the World Cup and European Championships. No-one explored his thoughts on the Europa League as he has never needed to have any.

If United are seeking a shaft of light in the gloom, it is that Ferguson has proved to be the master of regeneration before - but the scale of disappointment, maybe even shock, at what happened at Basel should not be underestimated.

He has the core of a strong team. Phil Jones will be an outstanding player in the future for United and while David de Gea was again fallible, he is a young keeper learning on the job and sound judges insist he will come good.

United also have young talent coming through in the shape of Tom Cleverley, Chris Smalling and Danny Welbeck to add to Jones and De Gea, with goals guaranteed for the future from Javier Hernandez, who was sorely missed on Wednesday.

Wayne Rooney remains United's key figure despite being out of sorts at Basel - but it is that figure of midfield authority that Ferguson must uncover, a powerful force in the mould of Paul Scholes or Roy Keane. Not an easy task, but until Ferguson completes it, this United side may be forever destined to fall short.

And Ferguson is also at his most dangerous when his back is against the wall, although he sounded as low and subdued as he ever has as he sifted through the damage inflicted on United's reputation in Switzerland.

Thursday nights will be busy in Manchester in 2012.