Defiant Terry concentrates on his football

The man who vowed to fight "tooth and nail" to clear his name was not going quietly - or quickly - as he stood bare-chested in a small corner of White Hart Lane in front of Chelsea's fans.

John Terry has shown remarkable resilience in his ability to blank out personal turmoil, accompanied by the acidity of opposing fans, when he seeks sanctuary from his troubles on a football field.

And so it proved again as Terry emerged as a central character in the cast of an enthralling 1-1 draw between Tottenham and Chelsea. It came only a day after learning he will face a racially aggravated public order charge following an incident with QPR's Anton Ferdinand in the west London derby in October.

The law will take its due course so, on this noisy night, the Chelsea and England captain was left to concentrate purely on his football. 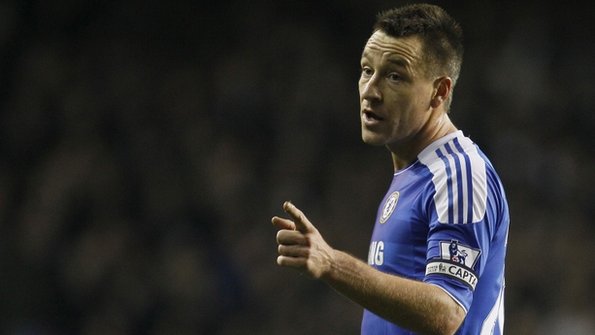 Terry handed his shirt to a Chelsea fan after the game. Photo: Associated Press

He clearly deemed his night's work a success as he stood stripped to the waist beating his breast in defiance before Chelsea's fans after handing his blue shirt to an elderly female fan.

Chelsea, perhaps having noted the largely adverse reaction to Liverpool's players wearing T-shirts supporting team-mate Luis Suarez after he was found guilty by the FA of racially abusing Manchester United's Patrice Evra, left Terry to make his own statement.

It was a long, hostile night for the 31-year-old as he was subjected to a sustained barrage of abuse from Spurs fans.

Chelsea's captain began nervously, failing to track Emmanuel Adebayor closely enough for the opener, but he grew into the game.

He ended up playing his full part in a Chelsea performance that will have brought real encouragement to manager Andre Villas-Boas once they survived being dazzled by Spurs for 20 minutes.

Terry took blows on and off the pitch at White Hart Lane, the majority of the crowd revelling in his pain when he took a kick from Adebayor that left him rolling in agony in the second half.

Inevitably, given the sub-plot running through this game, it was Terry who performed the final decisive act of a fine game that did both teams great credit, even if it did not do a lot of good for either of their Premier League positions.

Tottenham now trail second-placed Manchester United by seven points, admittedly with a game in hand, while Chelsea are two points further back.

After a frantic finale that saw opportunities come and go for both sides, Adebayor - whose goal was cancelled out by Daniel Sturridge's - shaped to win the game for Harry Redknapp's side in the dying seconds.

The Togo striker's careful angled finish took a slight touch off the fingertips of goalkeeper Petr Cech but still looked goal-bound. That was until Terry's anticipation allowed him to make the crucial block and save a point Chelsea had fully earned. 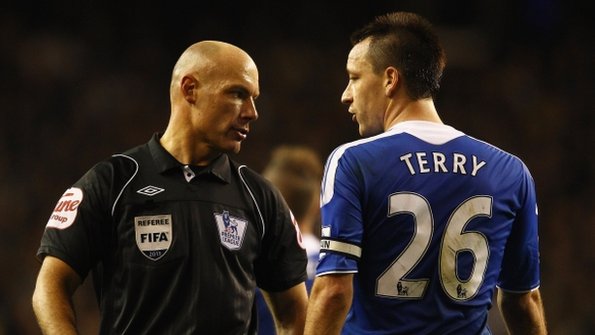 Chelsea's supporters had matched the taunts of Spurs's fans with almost equal volume in their backing of the team's captain. And that block gave Terry the platform to stride briskly towards them and join in a scene of mutual appreciation.

Circumstances ensure that Terry's treatment will now be a consistent narrative running through Chelsea's games - but he has proved that it has no adverse effect on his performances.

It would have been an injustice had players from either side finished on the losing side but it was clear who the visiting support felt they had to thank for their point.

Villas-Boas could barely contain his delight with both Terry and Chelsea afterwards, with pretty much all things hailed as "fantastic". There was real purpose about Chelsea for 70 minutes against a Spurs side who played with searing pace early on as they threatened to overrun their opponents.

Redknapp was in downbeat mood in his post-match briefing, cursing the injuries that removed Aaron Lennon and Jermain Defoe from his selection plans before they were joined by Rafael van der Vaart after only 45 minutes.

Van der Vaart's constant hamstring problems are now a real source of concern for Redknapp, who rightly pointed out a lack of thrust on Spurs's right-hand side without a player comfortable in the position.

Redknapp believes Spurs can make a serious dent in the title race, while Villas-Boas also repeated his assertion that Chelsea are in the hunt.

On the evidence produced at White Hart Lane, Spurs and Chelsea are two teams containing real talent and the squads to stay for the long haul. But this was the fare of top-four material rather than serious challengers to Manchester City and Manchester United.

And there is no shame in that.

Redknapp has fashioned a wonderfully exciting side, while Villas-Boas himself has looked more assured and confident about his own place at Chelsea in the last fortnight. Still, it is hard to see either lifting the Premier League title.

For Terry, the battles off the field are still to come but his body language as he walked down the tunnel at White Hart Lane on Thursday spoke of a man who felt he had won round one of the fights he will face on the pitch.