Fabio Capello flies back to Italy to join his newly extended family accompanied by an impressive body of work in 2011 and quiet satisfaction that England are building momentum ahead of Euro 2012.

England followed up victory against World Cup holders Spain by securing a first win against Sweden since 1968 with their 2,000th goal to end the calendar year unbeaten with six wins from nine games.

Capello was stone-faced and unmoved when presented with this list of achievements, waving a hand dismissively and grunting: "Statistics."

Statistics indeed, but not bad ones for a team that looked at their lowest ebb after the embarrassment of a World Cup exit against youthful and vibrant Germany in Bloemfontein last year.

And while few can seriously suggest Europe's top teams live in fear at the prospect of facing England in Poland and Ukraine next summer, Capello can at least allow himself a measure of optimism. 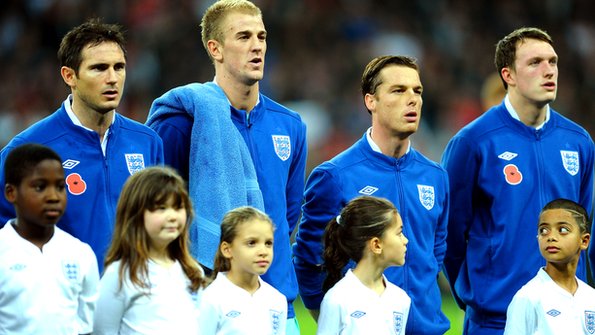 Younger stars, like Joe Hart and Phil Jones, have established themselves alongside older heads. Photo: Getty

He will now finally begin belated celebrations with his son and new daughter-in-law after missing their wedding to oversee England's triumph against Spain - and he may also toast some new young members of his footballing family.

The phrase "Golden Generation" was reduced to one of the most laughable in England's football lexicon by the deeds of this so-called group in tournaments stretching from Japan in 2002 to South Africa in 2010 throughout the last decade.

It means whenever there is evidence of a new young breed of England footballer, the default position must always be caution. The days of getting carried away have gone, even among the most optimistic of Capello's followers.

But in the last two games, as well as the last 12 months, there is an increasing sense that England's old guard is now being replaced, or will be replaced very soon, by a fresh look to the Italian's squad.

And Capello did let the mask slip for a moment as he reflected on the emergence of Manchester United's Phil Jones, Everton youngster Jack Rodwell and Kyle Walker of Tottenham, who all excelled against Sweden to press their claims for a spot in the Euro 2012 squad.

He summed up his pleasure as he said: "During these games I looked for something new and found it. I've found it in Rodwell, Walker and Jones. These three are interesting. They are really good technically, really good physically and all three players are fast. This is important in modern football."

The Italian also has United's Chris Smalling and Danny Welbeck pushing for places while Chelsea's Daniel Sturridge also won his first cap against Sweden - then we come to the trio he was so keen to highlight at Wembley on Tuesday.

Jones, barring injury, can pack his bags for Poland and Ukraine. He will be part of England's central defence in the long term but Capello examined his midfield versatility against Spain and Sweden and was delighted with the results.

Against Sweden he played Jones in the role Parker has made his own, and he did it to such effect that Capello will be satisfied he can be used in an emergency as well as being utilised at right-back and as a central defender.

Everton's Rodwell has only recently registered on Capello's radar. After one game at Wembley not so long ago, he reacted to the mention of his name as if he was not actually aware of his existence. Those days have gone.

Rodwell's impressive turn against Sweden, one presentable missed chance apart, demonstrated his development as a midfielder. He can play a holding role when required but is also showing an increasing ability to find promising attacking positions.

It was often felt Rodwell did not make life uncomfortable enough for opponents and was more style than substance. Under greater urging from club manager David Moyes, he is now becoming the player his admirers insisted he would become.

Capello was guarded about Rodwell's 2012 prospects as midfield is an overcrowded area with Steven Gerrard and Wilshere out injured and Parker and Gareth Barry also vying for places - but the 20-year-old has time to build on the impression he has made on Capello.

Euro 2012 may yet come too soon for Rodwell, but he is coming with a real run and may make a convincing case for inclusion. 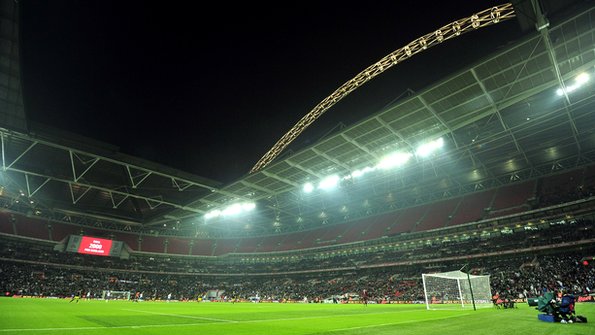 Despite empty seats at Wembley last night, England fans should find much to enjoy about their team. Photo: Getty

Tottenham's Walker has a real opportunity at right-back, especially if Capello mystifyingly continues to turn a blind eye to the performances of Manchester City's Micah Richards.

Liverpool's Glen Johnson still appears to be Capello's first choice but remains unconvincing. Walker, like Rodwell, must do battle with other contenders such as Smalling and Jones. And it would be remiss of Capello not to seriously consider Richards again if he continues his current prime form.

Fulham's Bobby Zamora was another presented with an opportunity against Sweden, namely the chance to push ahead of Liverpool's Andy Carroll. It is debatable whether he did enough to make that leap, although he worked hard and Capello is a confirmed admirer.

England's win against Spain was met with some sneering from those who regard themselves as purists and Sweden did not offer the sternest of tests, indeed the most passionate Scandinavian offerings on show at Wembley came from an ABBA tribute band outside the stadium and veteran act Roxette plying their trade at the nearby Arena.

These games, however, will be of real service to Capello. He may have been fooled into thinking all was well when England qualified so impressively for South Africa and was consequently tempted to more or less leave well alone with his squad.

Capello does not appear to be making the same mistake as he formulates his plans for Euro 2012. New players are being introduced and experimentation may even be the order of the day before the squad is finalised.

Wembley itself saw vast open spaces in a crowd of 48,876, the lowest since the stadium was rebuilt. It made for a low-key atmosphere.

John Terry returned as captain after missing the win against Spain. The man who is the subject of a Metropolitan Police investigation into claims he racially abused QPR's Anton Ferdinand in the recent west London derby was not universally acclaimed when his name was announced before kick-off, but once the action began he strolled through untroubled.

And yet even the captain cannot be sure of his place following outstanding displays by Phil Jagielka and Joleon Lescott against Spain, which is exactly how Capello wants it.

England cannot be talked up as a potentially major power at Euro 2012 on the back of beating Spain and Sweden but the emergence of fresh, fearless and energetic young players means Capello has had a good few days. And a satisfactory year.