Abramovich must stand firm behind Villas-Boas

Villas-Boas knew Chelsea owner Abramovich's special demands when he took the call to succeed Carlo Ancelotti, sacked at the foot of a flight of stairs at Everton only a year after winning the league and FA Cup Double.

The 34-year-old Portuguese was acquainted with them again on Sunday after a 2-1 loss to Liverpool, following on from a 5-3 reverse to Arsenal, meant Chelsea had suffered successive home defeats for the first time since Abramovich took control in 2003.

Villas-Boas stretched optimism to breaking point - and arguably played a little fast and loose with Abramovich's past - when he suggested it was unlikely the Russian would pay £13.3m to prise him from Porto only to hand him a fortune in short order by way of a pay-off.

Ancelotti bit the dust soon after writing a new chapter in Chelsea's history, while Luiz Felipe Scolari went west in 2009 after only seven months at Stamford Bridge - despite leading his side to the top of the table after 12 league games.

Surely, though, it is ludicrous to suggest Villas-Boas, regarded as one of Europe's finest young coaches after winning the Portuguese title and Europa League at Porto last season, is under serious threat so early in his tenure.

And yet he faced considered questions about his future following Liverpool's victory, based on recent indifferent form and the sudden appearance of a familiar spectre at the Stamford Bridge feast, Guus Hiddink.

Abramovich has genuine affection for Hiddink from his short spell in charge at Chelsea in 2009, when the Dutchman won the FA Cup and was only an injury-time equaliser away from beating Barcelona to reach the Champions League final.

Hiddink may have failed to take Russia to the 2010 World Cup and Turkey to Euro 2012, but his recent availability comes with unfortunate timing for Villas-Boas.

The former Porto boss, however, was impressively defiant as he faced his inquisitors on Sunday. He is convinced Abramovich has bought into his long-term vision and is confident, or at least as confident as any Chelsea manager can be, that he has the oligarch's full support. 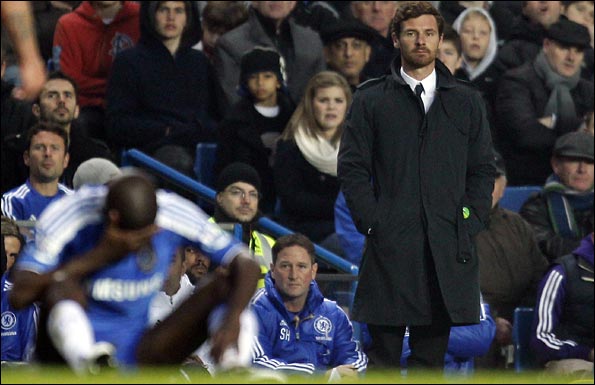 Even more impressively, Villas-Boas spoke without the aid of a safety net. He refused to talk of transitional periods or make pleas for time. He accepted the responsibility and pressure that comes with working for Abramovich and was comfortable with it.

Villas-Boas believes, contrary to some fairly recent evidence, that he is a Chelsea manager in it for the long haul - and the performance against Liverpool suggests it may need to be a lengthy journey.

Abramovich placed his faith and used his vast wealth to secure Villas-Boas. And as Chelsea moved to dispel talk of an increasingly frosty relationship between owner and manager, it must now be time for Stamford Bridge's ruler to hold his nerve.

Chelsea's reputation took heavy blows following Ancelotti's ruthless dismissal and it would invite scorn if they prematurely dispensed with the manager Abramovich charged with shaping their future when he arrived in June.

Abramovich was acknowledging Chelsea had flaws by sacking Ancelotti and appointing Villas-Boas. And club officials were remaining calm amid what was perceived to be a gathering storm around their young manager.

Chelsea's squad has been in need of renewal in recent seasons. Villas-Boas may need years rather than months to complete it and his task must be viewed in that context.

Former Chelsea star Pat Nevin was an observer at Chelsea on Sunday and told BBC Sport: "It's pretty obvious what he is trying to do. Some people might call it naive but it is certainly positive. Chelsea do take chances, they will lose goals and they leave defenders isolated - but he does have a positive approach.

"Obviously there is talk about the squad needing a revamp but most clubs revamp their squad and they do it intelligently over a period of time. If you look at Chelsea's team in the first half against Liverpool, it looked like quite a few of the players might need to be involved in a revamp, but in the second half they were decent.

"Abramovich wants more than that, though. He wants a team to really compete for the Champions League and, at the moment, I am not convinced this is a team that will do that. It may well be that some of the personnel may have to be revamped, which will happen through natural wastage anyway.

"I actually think it's a really good squad. They were a goalpost away from winning the Champions League. The problem is those goalposts have been moved by Barcelona in that competition and Manchester City have come through in the Premier League."

The ability of Liverpool, as well as QPR and Arsenal, to trouble Chelsea in recent weeks underscored some ominous signs. The sturdy spine of Chelsea's past successes is finally weakening.

John Terry and Ashley Cole have been in desperately uneven form this season - and Sunday was no exception. The pair were vulnerable to the movement and pace of Luis Suarez and Craig Bellamy, while keeper Petr Cech's uncertain moments now appear with increasing regularity.

Frank Lampard, though still a strong influence, is in the twilight of his career. And while it is always dangerous to roll the credits on a player of Didier Drogba's quality, the old powerhouse is looking like a spent force.

For all Fernando Torres' qualities, and I remain an admirer, he is looking lost again at Chelsea, while David Luiz, the other January signing, was a mess of indiscipline against Liverpool. He marches to the beat of a different drum and leaves Chelsea's entire defence out of step, perhaps making the unease of Terry and Cole understandable.

Chelsea remain a serviceable top-tier Premier League team, but not one that will bring Abramovich his goal of the Champions League or even another title in its current guise and position.

And while Villas-Boas made his name on the back of winning the Europa League, he will know he must not take Chelsea anywhere near that competition on Abramovich's watch.

Villas-Boas has arrived at the time when these big changes must be made. He has bought well in Juan Mata, while Raul Meireles may yet prove a wise purchase.

He will also need to oversee the filtering of a new generation of talent into Chelsea's side, with Oriol Romeu, Romelu Lukaku, Daniel Sturridge and Josh McEachran among those hoping to graduate permanently.

This is all part of the challenge facing Villas-Boas, whose body language spoke of a man in the mood to accept it. Now Chelsea and Abramovich must hold steady and wait to discover if his plans come to fruition.