Podgorica, Montenegro
As England's players trudged through Podgorica's puddles close to midnight while lightning illuminated the skies above The City Stadium, the latest storm raged around Wayne Rooney.

Rooney made his way silently on to the waiting team bus, cast in the role of the villain who had placed a dark cloud over England's satisfaction at reaching Euro 2012 with the draw they required against Montenegro.

What should have been cause for celebration as Fabio Capello's goal was achieved became an inquest once Rooney inexplicably - and irresponsibly - kicked Montenegro defender Miodrag Dzudovic in an act of wild indiscipline 17 minutes from the end of a frantic final qualifier and was promptly sent off.

England's ambitions of winning Euro 2012 were put into sharp focus by the manner in which they allowed a position of ease afforded by goals from Ashley Young and Darren Bent to slip into the desperation of uncertain defence after Elsad Zverotic pulled a goal back for Montenegro with the final kick of the first half.

It was followed by the moment that overshadowed the achievement of qualification. Rooney indulged in a spot of routine jockeying for possession with Dzudovic before swinging his right foot in a hack at his opponent's calf. 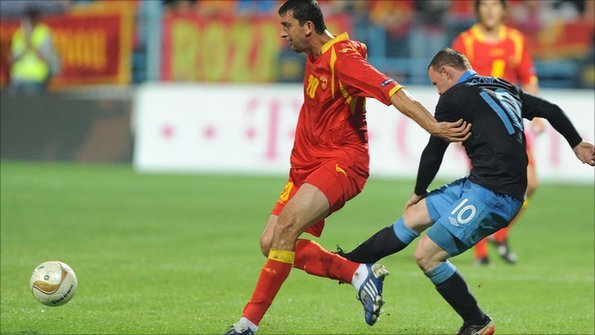 Wayne Rooney was sent off for this tackle on Miodrag Dzadovic with 17 minutes to go Photo: PA

England's performance, which fell off a cliff after the perfect first 35 minutes, had already hurled a bucket of cold water over anyone who felt they might be successful in Poland and Ukraine.

It was then undermined by a moment of madness from their finest player.

Capello's after-match briefing understandably became an examination of his decision to play Rooney a little over 24 hours after his father had been arrested in a probe into alleged betting irregularities. It is easy, with hindsight, to suggest Capello should have left Rooney out but in reality this is nonsense. England's coach had been assured by the player about his state of mind to play in a game of major significance and was right to take his word.

Rooney is the sole culprit here, as he has been before, for letting down his coach and his team-mates with another reminder that an explosive temperament is never far beneath the surface.

And so it begins again. Rooney's back story runs like a thread through England's recent history at major tournaments and it will again now he is suspended for at least the first game of next summer's tournament.

In 2004 he was magnificent in the European Championship in Portugal until injury. Before the 2006 World Cup supporters were asked to touch a diagram of his broken metatarsal in a national newspaper in a bid to speed the healing process - the reward was a red card for kicking Portugal's Ricardo Carvalho in a losing quarter final.

In South Africa last summer, out of form and crushed by boredom, Rooney was almost a passenger at the World Cup. In other words, Rooney and major tournaments do not always get on. On occasions England cannot live with Rooney, but they simply cannot live without him.

And yet the deal Capello and England make in return for his genius includes moments like that which came amid the thunder and hostility of Montenegro on Friday.

The sadness of his latest red card is that he had shown genuine signs of maturity in recent times, but the kick that gave referee Wolfgang Stark one of the easiest red cards of his career was mindless.

It may well be that these dark forces that persuade him to act as badly as he did here will now accompany him until the end of his career.

Part of Rooney's magic is his unpredictability, his spontaneous nature and approach - but it also comes with a combustible temperament and this is baggage it now seems he will carry forever. Issuing strictures about growing up is easy, but this dark side seems to be a permanent presence.

It meant England's qualification came at a price, which mattered little to Montenegro who concluded heavy pressure in the second half with an equaliser deep into injury time by Andrija Delibasic that sent his country into the Euro 2012 play-offs.

Rooney left his 10 remaining colleagues to face a baying, passionate mob of a crowd and a Montenegro team on an upturn. Ultimately England will have been happy to take a draw, their place in Euro 2012 and fly home.

This was a night high on emotion and the equaliser was the signal for wild celebrations amid supporters of this proud, tiny nation of 625.000 inhabitants. It continued after the final whistle when, in a somewhat unusual tradition, players returned to the pitch without their shorts in joyous scenes.

Capello can now turn his attention to next summer, but only the wildest optimist would study England's body of work and their squad and predict success in the face of competition from the likes of Spain, Holland and Italy.

Manchester United's 19-year-old Phil Jones had a tough debut at right-back, with some good moments mixed with tough times against the talented Stevan Jovetic but he should now get his chance in the centre of defence as Capello varies his option in friendlies.

Ashley Young looks a player of increasing international assurance while Theo Walcott's cross for the Manchester United player's opening goal was as fine a piece of creation as he has produced for England.

And yet it all comes back to Rooney. England may not be among the favourites to win Euro 2012 but their chances improve immeasurably when he is playing - sadly the streak of reckless indiscipline that refuses to disappear means they will already travel to Poland and Ukraine at a disadvantage.