Sir Alex Ferguson raised expectations by elevating Manchester United's meeting with Liverpool to a level above Spain's "el Clasico" between Barcelona and Real Madrid - then dropped them to the floor with the arrival of his teamsheet.

Ferguson's selection did not reflect this lofty status and looked shaped to secure a point and end a run of three Premier League defeats at Anfield, not put on a show for the likes of visiting basketball superstar and Liverpool shareholder LeBron James.

The absence of United's own special talent Wayne Rooney was the result, Ferguson explained, of the striker being "devastated" by his three-game Euro 2012 suspension after a red card for England in Montenegro.

So Rooney joined United's finest attacking weaponry, including Nani and Javier Hernandez, in spending the first hour either sitting down or trotting along Anfield's touchline to various levels of abuse.

Ferguson's starting line-up provided much of the backdrop to a game Liverpool should have won after Steven Gerrard celebrated his first start since March by putting them ahead - and one United were grateful to draw after the predatory Hernandez headed a late equaliser.

In the search for explanations for this approach, several plausible theories can be put forward. Ferguson and his elephant's memory will have recalled those three losses, characterised by Liverpool ensuring they outfought United comprehensively before letting the quality of players like Fernando Torres and, latterly, Luis Suarez take effect.

So Ferguson relegated his best attacking trio to the bench, sent Phil Jones into midfield as a mark of exaggerated respect to Charlie Adam and played trusty workhorses Darren Fletcher and Park Ji-sung in midfield.

There is also an important Champions League game against SC Otelul Galati in Romania on Tuesday and next weekend's Manchester derby to consider. There was, however, actually an air of negativity and a flattering measure of respect to Liverpool in the cautious approach of a manager not usually known for taking a backward step. 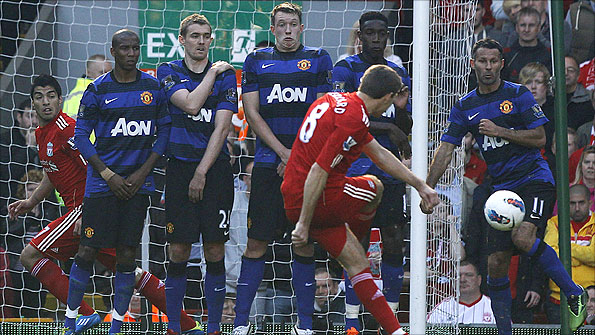 Manchester United made some uncharacteristic mistakes against Liverpool. Photo: PA

If it was designed to ensure United, above all, did not lose their unbeaten Premier League record this season at the home of their arch-rivals it worked - but it was a mighty close thing because Ferguson got away with one here.

Liverpool had enough opportunities, including three in injury time, to extend that sequence of victories in the face of an unconvincing team choice and unconvincing performance from the 19-times champions.

United only actually joined the battle once Gerrard's 68th-minute free-kick, aided and abetted by Ryan Giggs inexplicably jumping out of the wall, put Liverpool ahead. It was only then that the fixture actually resembled anything like the game Ferguson assured us it was.

For Liverpool there was a sense of missed opportunity against this unfamiliar, ill-at-ease United, and for the visitors a sense of relief as their supporters tucked away in a corner of Anfield Road celebrated a draw at the final whistle.

If Ferguson, in time-honoured managerial style, was searching for positives he could take them from the result and a performance from goalkeeper David de Gea that went a significant way towards answering many questions posed about the youngster since his summer arrival from Atletico Madrid.

It was in games such as this, in front of a Kop intent on probing his temperament and ability, that it was said De Gea would face his most searching examinations. He passed this particular test with plenty to spare.

De Gea was outstanding, not only showing real presence in his area but by producing three crucial saves. The Spaniard blocked Suarez at point-blank range in the first half, then saved brilliantly from Dirk Kuyt and Jordan Henderson as Liverpool reacted admirably to Hernandez's equaliser.

And watching from the sidelines for much of the afternoon was Rooney, as Ferguson once again showed Merseyside brings out his protective side. He left Rooney out of the meeting with former club Everton at Goodison Park last season following allegations about his private life and here again he was removed from the starting action by his manager.

If Rooney was indeed devastated following his England ban, it is hard to imagine the boyhood Evertonian's mood actually being improved by his exclusion against Liverpool. Could it be Ferguson does not trust his temperament in front of a Merseyside audience?

When the striker did come on it was in a deeper midfield role and to a predictably raucous Anfield welcome. He survived in comfort - the chants of "who's the Scouser in the wig?" from the Kop in honour of his mightily impressive new head of hair was as harrowing as it got.

Manager Kenny Dalglish understandably claimed Liverpool's disappointment at their failure to beat United was an obvious indicator of their improvement, but there will also be frustration that they were unable to take advantage of Ferguson's surprisingly unambitious line-up.

Liverpool will take delight in the return of Gerrard after groin surgery with a goal that indicated his importance, while Dalglish himself admitted he was "running out of vocabulary" to describe the darting, dangerous Suarez.

If he is struggling, Ferguson and United's players may be able to help him out with a few words because the Uruguayan is a mixture of pure class and a confrontational, provocative approach that will make him an icon at Anfield and an irritant just about everywhere else.

United's manager restricted himself to: "The boy Suarez dives all over the place." And there can be no dispute he is an expert at winning and drawing fouls.

Suarez is also a class act and was a constant threat to the returning Rio Ferdinand, who had a full-time job keeping him in check.

So the endgame was anti-climax. And on this evidence, and with those noisy neighbours Manchester City now banging the drum at the top of the Premier League, Ferguson may be forced to revise his opinion and consider whether next week's derby at Old Trafford might just be an even bigger game.