England will not have to wait long to find out what they have let themselves in for by qualifying for Euro 2012, as European champions and World Cup holders Spain come to Wembley next month.

The good news - and coach Fabio Capello and members of the Football Association hierarchy were correct to point this out - is that England qualified top of their group and unbeaten after Friday's tempestuous draw in Montenegro.

Yet this appeared a small mercy as Wayne Rooney once again proved he cannot be trusted to control his temper and England were given a good old-fashioned going over for 45 minutes before securing the point required.

England's task of turning themselves from convincing qualifiers to genuine contenders in Poland and Ukraine next summer was arduous enough before Rooney took a kick at Montenegro's Miodrag Dzudovic and was rightly sent off by referee Wolfgang Stark.

If Rooney only misses one game in Euro 2012 he can consider himself fortunate because he has previous for this behaviour and any plea for leniency is undermined by the very nature of his dismissal in Podgorica.

Capello has not exactly sounded happy that Spain will provide England's first opponents as he hones a line-up without Rooney, who will not figure against them and, in all likelihood, will remain on the margins of England's plans until he is eligible to return.

Spain's visit, however, will provide the sternest measure - albeit in friendly competition - of where England stand in the months before Capello and his players attempt to prove lessons have been learned from the debacle of the 2010 World Cup campaign in South Africa.

England's qualifying campaign has been satisfactory without ever suggesting rampant optimism should accompany them on to the plane for eastern Europe. This may be the pessimist's view but it is also the realistic one.

Capello has made it clear he will be conducting experiments between now and then but he could have done without England's most influential player proving once more that beneath the genius can lurk a liability.

There was certainly plenty to ponder as Capello and his players filed on to their team coach through a Podgorica downpour close to midnight on Friday for their flight back to England.

England looked alarmingly vulnerable once serious pressure was applied. Nor was it being applied by one of the big players of European football such as Spain, Italy or Germany. They looked short of pace in defensive positions and suddenly the midfield looked pedestrian and lost control.

Crucial months lie ahead for Capello and the England squad as the jockeying for places and positions starts - and there remains plenty of time for change.

Joe Hart is a certainty to be in goal, barring accident, while John Terry and Ashley Cole will fill two of the defensive positions, even though they were as lacking in authority as their less experienced colleagues when England came under siege from Montenegro after an opening 30-minute cruise.

Capello does not do smitten, but there is little doubt that even "The Iron Sergeant" can barely suppress his excitement about Phil Jones when he says: "Phil Jones is born to this. Absolutely. Like Jack Wilshere. Talent is talent. You can't create talent. You are born with talent."

Jones looked exactly what he was - a teenage central defender playing at right-back - on an England debut that demonstrated both promise and understandable naivety.

Capello's eagerness to get such a special talent into his team is understandable, but his development towards Euro 2012 must now come with games alongside captain Terry in central defence.

Gary Cahill has not let England down but Jones is the future and that future must start now.

Whether he is a success or not has ramifications for his United colleague Rio Ferdinand, who faces the growing prospect that the youngster will unseat him for club and country. 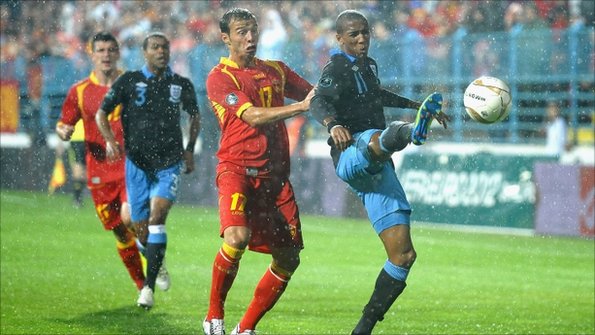 England lost their 100% away record in qualification after being held 2-2 by Montenegro. PHOTO Getty

The resulting gap at right-back will occupy Capello's thoughts between now and the summer and this promises to be quite a scrap. After a wasted journey to Montenegro, Micah Richards could be forgiven for a growing conviction that his England career will only restart when Capello departs.

Tottenham's Kyle Walker will get his chance to force his way in and has a real chance given that Glen Johnson, never one to excel for England anyway, is troubled by injuries. The answer may yet lie at Anfield, however, if Martin Kelly can stay clear of injury. He can also expect Capello's call.

Capello will also hope the medical teams at Arsenal and Liverpool can do him a favour by returning Jack Wilshere and Steven Gerrard to full fitness as they will surely form the midfield, along with Scott Parker.

Wilshere has looked made for international football in every minute he has played for England, while Gerrard will provide experience and authority. Gerrard, like Frank Lampard, has been a lightning conductor for criticism throughout his England career but if anyone has a compelling case to prove the national side is better for his absence they have yet to present it.

Manchester United's Tom Cleverley caught Capello's attention sufficiently earlier this season for him to pencil him in for England's November friendly before injury ruled him out. Expect to see him before Euro 2012 starts.

So to attack, and who will play instead of Rooney and then partner him.

Theo Walcott's effort in Podgorica was his England career in microcosm, a brilliant cross for Young's first goal followed by too many wasted opportunities.

Capello will give opportunities to Bobby Zamora, Andy Carroll, Jermain Defoe and Danny Welbeck in the months ahead, while Darren Bent scored again on Friday.

There may be intriguing late developments, with Chelsea's Daniel Sturridge another name mentioned with increasing frequency by Capello. And then perhaps the wildest card of all - Arsenal's Alex Oxlade-Chamberlain.

All logic says Euro 2012 will come too soon for Arsenal's teenage talent, but there is genuine excitement in England circles about Oxlade-Chamberlain, encouraged by his hat-trick for the Under-21s in Iceland last week.

The shadow of Rooney, his temperament and his uneasy relationship with major championships will loom over Capello between now and June. But at least he has time to devise his strategy.

Phase one of Capello's mission to renew England after South Africa was completed in Podgorica. Phase Two will take shape in these defining months that will eventually determine Capello's legacy.

MY TEAM FOR ENGLAND'S FIRST MATCH AT EURO 2012: 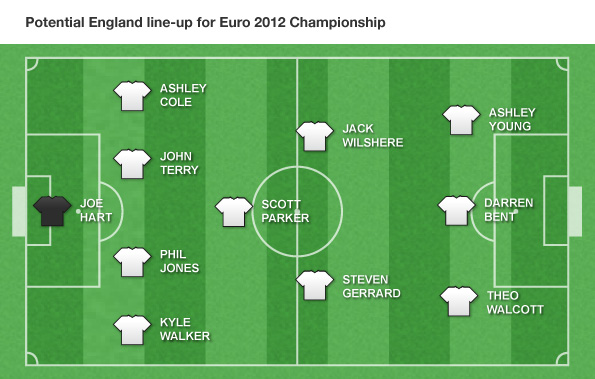 Joe Hart: Still rough edges to be knocked off but an outstanding goalkeeping talent in the making.

Kyle Walker: Micah Richards is ruled out of the equation by Fabio Capello's apparent mistrust of the Manchester City defender so Walker gets the nod - with a glance towards Liverpool's Martin Kelly.

John Terry: Best days may be behind him but still Fabio Capello's leader and automatic choice.

Phil Jones: Huge talent. Still naive and can be pulled out of position by opponents and his own sense of adventure, but maturing rapidly and can see off contenders before next summer.

Scott Parker: The anchor in midfield and the preference ahead of Gareth Barry, who struggled at the World Cup and also against Bayern Munich recently.

Jack Wilshere: Wonderful natural talent worthy of his place when fit. Will not be daunted by any opposition.

Steven Gerrard: An inspiration and England are never better for his absence. Must play if fit.

Ashley Young: Provides pace, goals and creation. Ready to mature at Manchester United in time to fulfil all his potential with England.

Theo Walcott: Infuriating but capable of carrying real threat. Not a selection made with 100% confidence. I remain a confirmed Adam Johnson fan but will plump for Walcott.

Darren Bent: Bent may miss chances but also scores goals and with Rooney absent England may need them. Often criticised for what he doesn't do without enough attention paid to what he does do. Capello's admiration for Manchester United's Danny Welbeck may still mean he is edged out.