Are City now in a position to overtake United?

When they walk out as Premier League leaders to face Manchester United on Sunday, Manchester City will notice that Old Trafford has undergone one small, but highly significant, alteration since their last visit.

High and hanging from the Stretford End, a long-running painful taunt has been removed, a small sign - literally - of the reluctant acceptance that City is now a club to be taken seriously on both sides of Manchester.

The famous ticking clock banner, that had reached 35 years going on 36, was removed within days of City's FA Cup victory against Stoke City in May and replaced with a more United-friendly "19 times" flag in honour of their record-breaking tally of domestic titles.

Now Roberto Mancini's City have the opportunity to prove they have loosened another of the shackles placed around them by United in the years of supremacy under Sir Alex Ferguson.

But have the so-called "noisy neighbours" acquired the strength to finally overtake United?

City have closed the gap on United at the speed with which the men from Abu Dhabi have signed vast cheques for stellar performers such as Sergio Aguero and David Silva.

Sunday's derby will not provide a definitive answer, but may deliver a measure of how near Manchester is to any sort of shift in the balance of power.

United's home form has been as formidable as ever with Tottenham, Arsenal and Chelsea all beaten - but there has been a hint of defensive vulnerability that will encourage City's strike force, which also includes Mario Balotelli, Edin Dzeko and Samir Nasri. 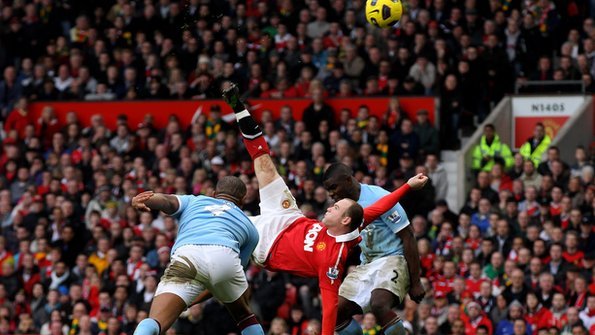 For City, the problem may be more psychological. Have they built up enough reserves of confidence and courage to believe this is the time to go to Old Trafford and make a statement about their aspirations and ambitions?

He told BBC Sport: "This is a statement game, of course, but City must not lose sight of the bigger picture and realise it is not just about beating United; it is about winning the title.

"Strangely, the fact City have a two-point lead going into a game like this presents them with a dilemma. Do you play for a draw or do they say, 'If we win this, we go five points ahead of United?"

And this is why so many arguments about this derby eventually focus on Mancini's tactical approach. Should he leave the handbrake on or take it off?

Hinchcliffe says: "It's not that City need to be all defensive or all gung-ho. United and City have a blend of players who can genuinely do both. That's why David Silva has impressed me so much this season.

"He works hard for the team but when he gets on the ball he can make things happen as a wonderful creative, technical player.

"I was worried when he first came whether he would be able to cope physically with playing in the Premier League, but now City have moved on and are getting more respect in the league he's getting more time on the ball and you don't see people just ploughing into him.

"Aguero is also fabulous player. He's key me, he's that Wayne Rooney player who can drop off and play as a central striker and can come into the hole and make things happen.

"It will be a big game for Mario Balotelli if he plays because he has got to learn to control his temper in a really high-octane game. If he does that, he can be very important."

The test for City is whether they can summon up the self-belief against a United side that has cast a shadow over them for so long, a club that still provides the benchmark for Premier League success.

Former Manchester United defender Gary Pallister suggests that though City are made up of these many talented parts, they still lag behind United in the sort of stability that makes up the substance of title-winning sides.

He told me: "City are still trying to find a team ethic and sometimes the problems off the field, such as those with Carlos Tevez, have caused as many headlines as their performances on it, which is a shame for them because they have really come on this season.

"You have got to build a club from the bottom up and Manchester United have got that. Manchester City are trying to find that way forward but there are big egos there as well.

"United have got that unity in their squad and have players coming through the youth ranks who understand what Manchester United is all about. This is really important."

It has been a Stone Roses sort of a week in Manchester as one of its fabled bands reunites - and as the teams emerge to the familiar strains of "This is the One" at Old Trafford on Sunday, it may well be that the sentiments of the song apply more to City than United.