Fabio Capello is nearing the end with England - so it was with some irony that he flew out of Sofia in the small hours accompanied by the growing sense that he is overseeing a fresh start.

Capello's tenure is scheduled to conclude at Euro 2012 and England's impressive 3-0 win here against Bulgaria, coupled with Wales' victory against closest rivals Montenegro, makes it increasingly likely he will spend next summer in Poland and Ukraine.

And while the victory must be placed in the context of just how poor Bulgaria were in front of their own support in the Vasil Levski Stadium, there was a freshness about England's faces, tactics and team selection that hinted at a shift in emphasis.

Frank Lampard represented the unwitting symbol of change, dropped after 86 caps, the first time England had started a competitive game without the Chelsea midfield man or Steven Gerrard since the World Cup quarter-final against Brazil in 2002, and only earning his 87th as a late substitute with the game won.

And to add significance to the selection, he lost out to Scott Parker despite the absence through injury of Gerrard and Jack Wilshere.

At the end of a week when he may have joined Arsenal or Tottenham but ended up staying at Bolton, Cahill was flawless in defence and showed his eye for a goal by opening the scoring early on.

Terry and Ferdinand have long been Capello's default option at the heart of defence. Those days may well have gone forever.

And at right-back Manchester United's Chris Smalling made his debut - a future England central defender who is mature enough to persuade Capello to introduce him to international football in an unfamiliar role.

Jones, his Manchester United team-mate Tom Cleverley and Andy Carroll looked on in Bulgaria, but they are also representative of the newer blood that may emerge more fully before the summer. 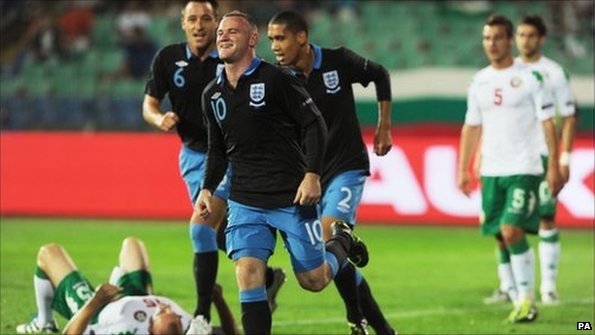 Rooney celebrates after scoring against Bulgaria

One central pillar to all England's plans remains in the shape of Wayne Rooney, a player reborn after a barren year and scoring twice before half-time to complete the formalities and take his goal tally for his country to an impressive 28.

He had more difficulty attempting to avoid a gold-plated human statue lurking outside the
concrete bowl of a stadium here in Sofia than he did escaping the attentions of Bulgaria's defenders.

Rooney transferred his club form seamlessly to England and once again confirmed what a difference he makes when he is on his game.

Capello the conservative, whether it is by accident or design, now appears willing to introduce young players and a more flexible tactical approach just as the calendar moves towards the end of his reign.

England's formation was fluid, with width provided in turns by Theo Walcott, Ashley Young and Stewart Downing, with Parker and Barry providing the shield.

Young initially supported Rooney from a central role, surprising given his success in wide positions for Manchester United, but Capello even remedied this with a half-time tactical alteration.

He was measured in his praise during his post-match inquest, slapping down a Bulgarian journalist who suggested Thursday's training session was more strenuous than the actual competitive fixture, saying: "I respect my opponents and their coach. I don't like your joke."

Bulgaria's best attempts at bombast came via the pre-match music - Led Zeppelin, Deep Purple and Black Sabbath in a deafening blast of mid-70s nostalgia - and the worst in shameful racist chanting aimed at Young and Ashley Cole. The Football Association rightly made its protest and Uefa must act.

Otherwise it was a night when almost everything went to plan for Capello and England. Victory was secured early and energies could be conserved, the only worry being a foot injury to Rooney, and all achieved on an unreliable surface that even had a coating of clover.

It will have been a satisfied England squad that flew home, although a note of caution must always be sounded after fine victories in September because they are then invariably followed by disappointments in June.

This provides the perfect antidote to any danger of getting carried away, especially as
England have also looked more comfortable playing away in this Euro 2012 campaign than they have at Wembley. History tells us we have been here before.

Events in Sofia and Cardiff conspired to take England closer to the showpiece. And while it was not exactly out with the old and in with the new, there is a changing dynamic about Capello's squad that is cause for guarded optimism.