Andre Villas-Boas found a swift solution to one problem surrounding Fernando Torres - whether he is as successful in curing the major difficulty faced by Chelsea's British record signing remains to be seen.

Villas-Boas smiled as he announced an investigation into an interview Torres gave in Spain, which quoted him as making less than flattering remarks about the speed of his older Chelsea team-mates, was over.

The search for the world-class striker that terrorised defenders for Liverpool and Spain goes on and will continue when Chelsea travel to Manchester United in the Premier League on Sunday.

A visit to the champions and Chelsea's main title rivals should be a perfect fit for a £50m striker, but stark statistics tell the tale. Torres has scored once in 23 appearances for Chelsea, a brutal contrast to 81 goals in 142 games at Anfield.

At Liverpool Torres was the player you could almost hear as well as see reducing defenders of the highest quality, to rubble. On one memorable night when he destroyed Real Madrid in Liverpool's 4-0 win at Anfield, one Spanish journalist reacted to another devastating run with the words: "He is like a golden bullet." 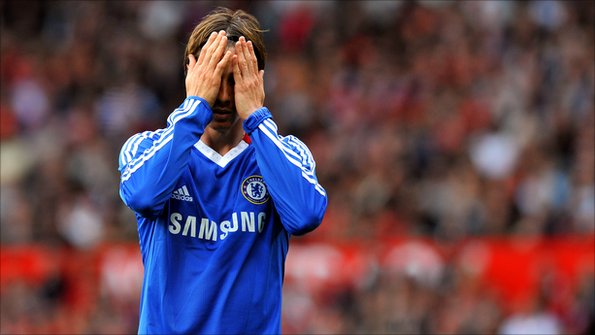 With only a single goal in a Chelsea shirt, will Villas-Boas persist with the £50m frontman? Photo: Getty

So why has Torres misfired so far at Chelsea - and can the 27-year-old ever recapture the menace and pace that elevated him to one of the world's great strikers two years ago?

Former Chelsea and Scotland winger Pat Nevin has never wavered in his belief that Torres simply needs the medicine of goals to cure his ills - while former Liverpool defender and Match of the Day pundit Alan Hansen expresses concerns about whether the Torres of old will ever return.

Nevin said: "Fernando Torres doesn't look like he's got anything wrong with him that a couple of goals wouldn't solve. His movement was good against Bayer and he almost scored a phenomenal goal in the first minute.

"What I also thought was a good sign was the way he set up the second goal for Juan Mata. It showed he is a team player. He is desperate for a goal but that desire to score is not forcing him into making bad decisions. He worked out the percentages, which were that he probably had a 35% chance of scoring and Mata had a 95% chance of scoring, and reached the correct conclusion."

Nevin added: "Chelsea won 2-0 because Torres did that and that is what people have to understand. He knew to try and score himself was the wrong thing for a good striker to do, so he did the right thing and I happen to think he is doing lots of right things.

"I have not moved my position on Fernando Torres one inch. He is a quality striker. He was left on the bench for the game at Sunderland and I was gutted for him because that was the first game Mata and Raul Meireles were starting and I think these are two players who have the vision and creativity to find him.

"I really think these signings will help Torres and another player who was finding him was David Luiz, a good player with good vision.

"I was praying for Chelsea to sign Luka Modric to feed Torres and I wanted to see Yossi Benayoun playing with him last season, but now he has Mata and Meireles and I do think they will be a huge help to him.

"While others may be questioning Torres, the Chelsea fans aren't. They can see he is working his socks off for the team. They watch the whole picture, how he is on the move from side to side all the time and always seeking openings. I think there are more questions being asked by Chelsea fans about Frank Lampard than Torres at the moment - which I also think is very unfair as well.

"The question of whether Torres plays in every game is still open because Villas-Boas has lots of options. He has Daniel Sturridge developing, Didier Drogba to come back and I thought Anelka looked superb when he came on against Bayer, but I don't agree with those who seem to think Torres has gone into some sort of decline.

"I haven't changed my opinion about Fernando Torres since day one. He is a class striker. Do not worry, by the end of this season it won't even be a debate."

Hansen, while in no hurry to write off Torres, admits there have to be doubts simply because of the length of his struggle.

He told me: "When he had his sensational season at Liverpool everything was based around blistering pace and sharpness. This gave him the confidence to play in that one-touch and hit it way that brought him so many goals.

"Now that pace and sharpness isn't there so he's snatching at things. I'm not saying he will never get it back but this is not six to eight games we are talking about, this is 18 months.

"The Torres of old had that pace and you wouldn't see him for dust. People couldn't catch him but now they are. I can't remember him flying past anyone for about 18 months. I'm not saying for one minute he won't come back but this is 18 months, not a brief blip.

"He might have spells when he comes back and scores goals but if you are dealing in facts, and you can talk all you want about confidence, one thing is undisputable and the fact is he is not as quick as he was in his first couple of seasons at Liverpool."

Torres, because of the money spent and the lingering feeling that he was more vanity purchase by Roman Abramovich rather than part of a considered plan, will be central to the narrative of Chelsea's season. Villas-Boas will hope it has a happy ending.