McLeish vows to win over the doubters at Villa

Alex McLeish started the long fight for acceptance at Aston Villa alone as the club's hierarchy left their new manager on his own to face the fall-out from the close season's most contentious managerial move.

In a subdued affair stripped of the fanfare and relentlessly upbeat messages associated with such occasions, McLeish cut the figure of a man relieved to get the introductions out of the way rather than revel in his move across the second city from Birmingham City to Aston Villa.

And he did it without the presence of Villa owner Randy Lerner and chief executive Paul Faulkner at his side as they kept their distance from the formalities rather than provide support for the besieged Scot.

Lerner is notoriously publicity-shy but if there was one occasion for either the American or Faulkner to front up and put the case for appointing McLeish to a suspicious, and in some cases openly hostile, Villa fanbase and explain the tortuous process to uncovering Gerard Houllier's successor then this was surely it. 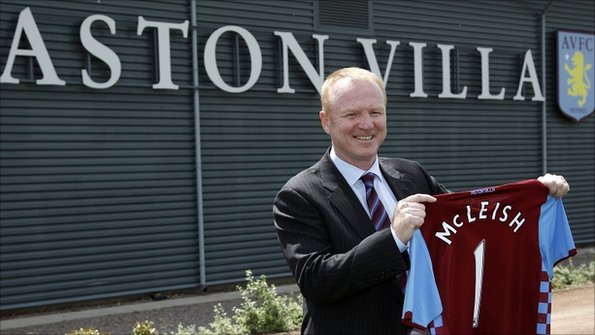 After all the headlines, McLeish is keen to start work at Villa. Photo: Reuters

Instead McLeish, with only Villa's media man for company, was left to deliver a straight bat defence to a sustained and inevitable inquisition about the mechanics of his move from Birmingham, citing legal reasons for his unwillingness to go into fine detail.

McLeish's official presentation as manager was made at the club's luxurious Bodymoor Heath training complex rather than at Villa Park because of preparations for a forthcoming Take That concert, so it was inevitable that there were several requests for Patience as he tries to win over his many detractors.

And there was even a sense that perhaps the Corsican sunshine he was enjoying when whispers of this move emerged had shielded McLeish from the strength of feeling stirred by his arrival at Villa so soon after quitting Birmingham via e-mail.

At times McLeish looked puzzled as he fielded understandable questions about increasing his personal security and whether he would have to curb his social activities to keep beneath the radar of high feelings fuelled by his decision.

He occasionally appeared to be struggling to comprehend the storm that had been swirling around his name since talk of this unique move from one Birmingham club to the other moved closer to reality.

It was a surreal experience for many of the media who tracked the highs and lows of his Birmingham career to face him wearing his claret and blue Villa tie and holding up the shirt of the club that was his fiercest rival only a fortnight ago.

McLeish tried to laugh off any potential threats to his safety as he said: "I haven't really thought about it. I would hope that even though the fans are passionate and those passions run high they don't take it to the extreme. Although I suppose some people might like to give me a punch, although I've got a bit of a glass jaw."

It is always handy to carry a Bill Shankly quote to use in emergencies - and McLeish had one standing by as he tried to defuse tensions created in the city by saying: "I really would ask people not to take it to extremes. Shankly once said 'football isn't a matter of life and death - it's much more important than that' but I'm sure he had his tongue in his cheek."

McLeish has noted the protests outside Villa Park and the unflattering slogans daubed at Bodymoor Heath and said: "Am I fazed by it? Does it depress me? It's disappointing but I've got to win these guys over and hopefully in a year's time we will be having a different press conference. The bottom line is that I have got to get results. They are the key to everything.

"It's not easy to watch it and say 'I'm loving that' but I have taken criticism before. I have had a tough time when I was manager at Rangers when I got it in the neck up there and it doesn't get much tougher than that."

I asked McLeish whether the controversy and unrest that has provided the backdrop to his appointment had diluted what should have been delight at joining a club of such stature and history in Villa.

He said: "I'm not saying I'm totally immune to what is going on or that I don't have feelings or that this is all water off a duck's back, but this day [starting work] has been a long time coming and at last I'm starting to feel there is a bit of momentum. It would be great just to walk out from a club and shake everybody's hands but it's not like that."

And McLeish also hinted at events that may make him even less popular at Birmingham when he suggested ill feeling would not be a barrier to attempts to return to his old club for players, insisting: "If I thought a player could improve Aston Villa then why not?"

It was a show of the mental strength he will need and he revealed his old mentor Sir Alex Ferguson had given his seal of approval when McLeish rang to thank him for supportive words. "He told me that Aston Villa is a big, big club so I think that sounds like an endorsement."

McLeish can now at least try to make football his priority, with attempts to keep Stewart Downing at the top of his agenda as he effectively admitted the fight to keep Ashley Young was lost, with the England winger expected to complete a move to Manchester United when he returns from holiday.

He said: "This has just got to be one of the biggest challenges of my life. I want to test myself as a human being and as a football manager."

And in taking over at Aston Villa only a matter of days after quitting Birmingham, he is about to do just that.