Nemanja Vidic's gladiatorial status among Manchester United's followers will be elevated to new heights if Barcelona are beaten and he lifts the Champions League trophy at Wembley on Saturday.

The Serbian has established himself as a cult figure at Old Trafford for his no-frills approach to the defensive arts and inspirational leadership that persuaded Sir Alex Ferguson to hand him the captain's armband earlier this season.

And as hundreds of the world's media flocked to United's secluded Carrington training headquarters ahead of Saturday's showpiece, Vidic set the tone for the task of avoiding a repeat of Barcelona's victory in the 2009 final in Rome.

He recalled with a grimace how Barcelona's win in the searing heat of the Stadio Olimpico wrecked his summer, an experience made more painful by the memories of Samuel Eto'o's easy escape from Vidic's attentions to score the goal from which United never recovered.

"We had won the Club World Cup, the Premier League and the Carling Cup, so to get to the Champions League final and lose was so disappointing. You think about that all the time on your holiday. It is not a nice feeling to have." 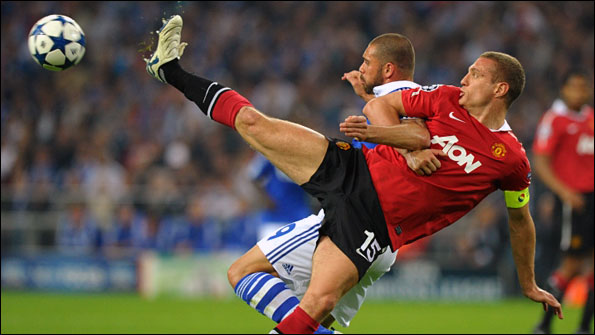 Now the Barclays Premier League Player of the Year wants to set the record straight and delivered a clinical assessment of how a team often derided as lacking United's trademark fantasy could yet deliver one of the greatest campaigns in the club's history on Saturday.

Body language speaks in many forms, and as Vidic outlined his Wembley demands a sullen figure passed quickly behind his back. It was Dimitar Berbatov, silent and with a cap pulled down low, sliding out of Carrington's indoor pitch to his waiting car.

As the captain bristled with determination, the Bulgarian looked every inch a man who would not be called upon to start against the Catalans.

Ferguson will expect Vidic to set the example and he insists United know exactly what is required to avoid another head-spinning trip on Barcelona's famous passing "carousel" that left them dizzy and defeated in Rome.

He said: "The players have to have courage and belief. We have to show commitment to believe in what we are doing in the game. We have to think about how to stop Barcelona but also how to score ourselves. It is one game where anything can happen and concentration is crucial.

"Concentration is vital in every game but in a Champions League final against Barcelona this is even more important. It is the biggest game of the season and it is important we also stay calm."

Vidic swept aside any lingering questions about the quality of United's squad - and it is worth a reminder that even the glittering talents of Cristiano Ronaldo and Carlos Tevez were no help in Rome.

I asked Vidic if he felt this team, with its different and more disciplined qualities, was perhaps better equipped to cope with Barcelona's expansive attacking approach.

He said: "I don't really like to compare the two teams. We are missing two or three players from that team and we have three or four new ones. That side and this side were both good teams in terms of quality but we will see what the performance and result is on Saturday."

What Vidic was happy to do was launch a stern defence of the latest United side to roll off Ferguson's assembly line of success, saying: "Barcelona are a great team. It is nice to watch them and everyone who watches a Barcelona game will say they enjoy it.

"But look at our team. We have won the league four times in five years and we have been in the Champions League final three times in four seasons, so we are not bad either.

"I think we have proved to everyone we are a good team. If you play 38 games and finish nine points ahead of the team in second place then you deserve to win the league. We don't need to prove we are a good team because we did it already."

Vidic mirrored a mood of quiet confidence as United's players faced the media and there was also complete respect for Barcelona and the danger they pose. Not a hint, however, of awe or fear.

United's mask of concentration and commitment cannot slip for a second against the side many regard as one of the finest in the game's history - but Vidic's final words underlined his faith in the players who will file out behind him at the scene of the club's emotional first European Cup win under Sir Matt Busby in 1968.

Vidic and Manchester United will hope this enough to bring the giant trophy back to Old Trafford for a fourth time. And ensure a happier holiday than in 2009.