Can Ferguson ever climb Barca barrier?

Sir Alex Ferguson hoped Manchester United's history would repeat itself when they faced Barcelona in the Champions League Final at Wembley. It did - but got the dates horribly wrong.

Instead of evoking memories of United's emotional first European Cup win against Benfica here in 1968, this was the misery of Rome 2009 revisited as Ferguson sat and suffered a re-run of the horrors of the Stadio Olimpico.

Barcelona do not do destiny. At least not the sort of destiny that forces one of the finest club sides in the game's history to stick to a sentimental script casting them as victims of the latest chapter in Ferguson and United's success story.

As in Rome, Barcelona spent 10 minutes getting the dust off their boots before inflicting a 3-1 defeat that was even more emphatic, even more brilliant, than the masterclass that descended on United two years ago.

Ferguson, understandably, announced he took no consolation from United's status as the second best team in Europe. He will take even less comfort from the fact that the best team is not merely a dot on the horizon, it has disappeared out of sight.

"It's the best team I have faced in my time as a manager," said a philosophical Ferguson in scenes eerily reminiscent of Rome. "Everyone acknowledges that and I accept that. No-one has given us a hiding like that." 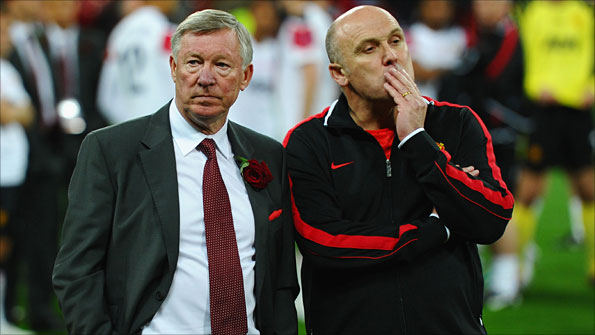 Ferguson's pain in defeat will be even more acute because he has consistently stated he knew exactly what went wrong in Rome. He has spent two weeks plotting behind closed doors on the system he felt confident would throw a crowbar into the smooth workings of Barcelona's passing carousel.

And yet, once again, United simply had no answer to the mesmeric brilliance of Lionel Messi, the uncanny accuracy in possession of Xavi and the range of Barcelona's attacking options. It is one thing knowing what went wrong against Barcelona and another fixing it successfully.

Statistics can lie, but on a chilly night at Wembley they spoke the truth. Barcelona had 19 attempts on goal to United's four, 13 on target against one and United did not win a single corner. Barcelona committed only five fouls.

Manchester United's supporters took defeat, painful though it was, with resignation. Indeed some set aside their disappointment to applaud in admiration of the exhibition they had witnessed from masters such as Messi, Xavi and Andres Iniesta.

In another Roman echo, United actually made the better start but soon there was that ominous rhythm to Barcelona's play, rewarded by Pedro's goal. United's response was better than on the banks of the Tiber - then they collapsed but here Wayne Rooney equalised before the interval.

It was a small shaft of light amid almost total darkness and second half goals from the magical Messi and David Villa did little justice to Barcelona's dominance.

Ferguson's tactical approach and team selection could be dissected for days to little effect. He may have populated midfield more with Darren Fletcher's selection. He may even have put Dimitar Berbatov on the bench instead of effectively consigning his top scorer to Old Trafford's dustbin by leaving him out altogether.

He may have bricked up Edwin van der Sar's goal but all arguments are invalid. On this night United were given the most comprehensive going over by a sensational team - and in that there is no shame.

Mismatch though this was, to snipe at United is to dilute Barcelona's mastery and they do not deserve that.

This was not about tactics it was about talent. No-one could have touched Barcelona on this evidence. Indeed United barely touched them at all. This was the footballing equivalent of trying to control wasps.

Rooney was the one United player to emerge with credit from a tireless performance, but all battles elsewhere were lost. In the preliminaries, potential Barcelona weaknesses were sought and ring rustiness from recent inactivity, plus Javier Mascherano's lack of stature in defence, were jumped on.

Not a bit of it. It turned out to be optimism gone mad as, Rooney's excellent strike apart, United did not lay a glove on Barcelona as they sailed serenely to their fourth victory in the competition.

The problem Ferguson faces as he talked defiantly of his next challenge in the bowels of Wembley is that it is hard to see how he will meet it. United's domestic domination is reflected in a deserved and historic 19th title, but how can they add to three victories in this tournament while Barcelona remain in their current, peerless, guise?

United will rebuild and regroup to add to their honours at home but it will take another special effort from Ferguson to fashion a side that can discomfort Barcelona. He has tried with a team containing Cristiano Ronaldo and Carlos Tevez and then with a more workmanlike and disciplined line-up - with equally painful results.

Ferguson always intended to rebuild this summer, but the scale of Barcelona's superiority and the obvious gulf in class between the two sides will crystallise his thoughts even further.

Goalkeeper Van der Sar made an undistinguished farewell in his final club game, wrong-footed for Pedro's first goal and slow to react as Messi's second - viciously struck admittedly - flew past him.

Paul Scholes may well have made his final appearance as a brief substitute, while Michael Owen's 90 minutes on the bench may also have concluded his Old Trafford career. As for Berbatov - Ferguson's decision to go without him at Wembley told us all we need to know about his future.

Ryan Giggs, 37, has had another fine season but was ill-equipped to cope with Barcelona's mobility and speed in possession while defender Rio Ferdinand is 33 in November.

Antonio Valencia was disappointing while Javier Hernandez did not get the service to demonstrate his quality but, along with the likes of Chris Smalling, they are fine investments in the future.

Hardly a team in crisis and all criticism of United must be placed carefully in the context of Barcelona's stunning talents.

United are good enough to already be next season's Premier League title favourites, but Ferguson will not be fooled into thinking this current crop can overcome the obstacle presented by Pep Guardiola's purists after a second chastening Champions League Final experience.

Ferguson has already lined up Atletico Madrid goalkeeper David de Gea to replace Van der Sar while Aston Villa's Ashley Young is touted as an attacking re-inforcement. But are they of the quality required to bridge a gap that was as big and imposing as Wembley's arch on Saturday?

With Scholes on the way out and the likes of Michael Carrick and Ji-Sung Park over-promoted in the task of tackling Barcelona's midfield, Ferguson must inject world-class players into this department.

Inter Milan's Wesley Sneijder is in the frame and Tottenham's lack of Champions League football may just make the wonderfully inventive Luka Modric an inviting, and vulnerable, target.

Rooney and Hernandez is a partnership of rich promise but a high-class striker may also be a priority unless Ferguson feels Danny Welbeck has bloomed to full maturity or Federico Macheda returns from Sampdoria closer to the finished article.

"We don't enjoy being second best," Ferguson added and in Premier League terms there is a very good chance they will not have to cope with that burden. The Champions League paints a different picture.

It is hardly the time for mass reconstruction after winning the title by nine points and Ferguson has the foundations of a title-winning side on which to build.

The latest punishment meted out by Barcelona, however, was a brutal illustration of how far United have to travel to another Champions League triumph.