What now for Wenger & Arsenal?

And then there was one. It was only a fortnight ago that Arsene Wenger confidently contemplated a challenge for four trophies as his most emphatic answer to charges that Arsenal had forgotten how to win silverware.

In a brief spell of desperate disappointment, Wenger has watched Arsenal's aspirations picked apart as Carling Cup final defeat against Birmingham City was followed by a Champions League exit against Barcelona before this FA Cup quarter-final loss at Manchester United.

Wenger's trademark words of defiance emerged almost like a reflex action and his well-practised brave face did not survive long before he was forced to hint at how the psychological damage of seeing Arsenal's targets removed one by one may have an impact on their final salvation, the Premier League title. 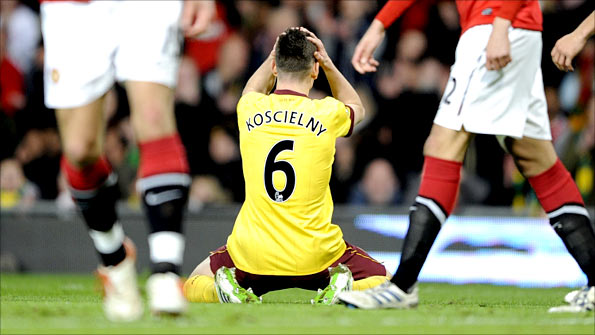 "Something has gone", Wenger admitted. And it was not simply the chance to win three major prizes. "Not in our effort or attitude but something confidence wise."

If Wenger does not rediscover that missing ingredient and Arsenal's six-year wait for a trophy extends into next season, then he must review the philosophy he holds so dear.

For all the purist beliefs that deserve so much admiration and have brought such pleasure, Wenger cannot sustain his Arsenal reign on promises of jam tomorrow while The Emirates' trophy cabinet remains bare.

Arsenal still have ample possibilities in the title race, and success would be celebrated by those who champion this great manager's cause, but the evidence has once again piled up in the last two weeks that Wenger and his players can no longer be trusted to deliver when it matters.

And this was surely the underlying concern eating away at Wenger as he cut a despondent figure in Old Trafford's media suite after United's 2-0 win, courtesy of goals in each half from Fabio da Silva and Wayne Rooney.

Arsenal may have drawn encouragement before kick-off from an unfamiliar United line-up that contained seven defenders, but once again this was familiar tale of Wenger's team enjoying huge swathes of possession and territory at Old Trafford but leaving empty-handed. 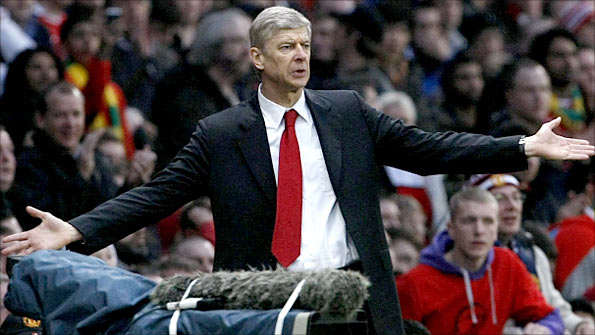 Wenger's frustration was apparent as he had to watch his team lose again (photo: AP)

As time ran out at Old Trafford, an agitated, animated Wenger stretched out his hands before him on the touchline, evoking an image of a man who has seen prizes slip through his fingers, the fear gnawing away that hard work may go unrewarded as Arsenal miss out once more.

Wenger still has his sights on the title, saying: "I believe that we can do it. It is a good test for us to regroup, stay together and respond quickly." They were words carried on the sound of hope rather than expectation.

He also claimed Arsenal's three pivotal defeats had all come in strange circumstances. Not really. The common thread running through the losses was that they either did not deserve, or did nowhere near enough, to win.

This was not a bad Arsenal performance, indeed United goalkeeper Edwin van der Sar was busier than opposite number Manuel Almunia - but it was a display that lacked bite, conviction, energy and inspiration.

In short, it was another example of why Arsenal fail so often to get over the line. Sir Alex Ferguson's team selection offered them an opportunity to banish the depression of the last 14 days but they were betrayed by a lack of conviction, an absence of killer instinct.

United have endured a mini-slump of their own recently. There remains, however, an iron self-belief in Ferguson's squad that does not appear to exist in Arsenal's, even though United are clearly in reduced circumstances compared to their pomp. There was a toughness about United, both mentally and physically, that is in short supply among Wenger's squad.

The Premier League title may yet provide spectacular consolation and vindication for Wenger's methods, but Arsenal have taken such a swift succession of heavy, bitter blows from Birmingham, Barcelona and United that there are fears it will prove too much.

If Arsenal are once again without a trophy, then Wenger's long-held argument that potential and promise is about to come to fruition will carry reduced weight. In among the odd madcap call for his dismissal, there remains huge support for Wenger among Arsenal's fans, illustrated vociferously by those who travelled to Old Trafford.

And it is backing he deserves because the notion that Arsenal should seek another manager is a wild one. Who could they get who is better than Wenger?

But for that support to be maintained, the time is coming when Wenger also has to accept the reality that his current approach, admirable though it is, must be altered if he and Arsenal are not to become the perennial nearly men.

Wenger may well be correct in his constant assertions that Arsenal are not far away. The brutal reality is that results in recent times suggest that they are still too far away, with vital pieces missing in the manager's formula for success.

Arsenal chief executive Ivan Gazidis recently told Radio 5 live's Sportsweek: "For us winning is certainly important but it is not the end objective of everything."

This is a romantic, some might say fanciful, notion that may not be shared by, for example, Cesc Fabregas if he goes through another season without a club honour to add to the Euro 2008 and World Cup medals he claimed with Spain.

And it is unlikely to be a philosophy shared forever by Arsenal supporters who enjoyed such riches under Wenger until it came to a halt after the 2005 FA Cup Final win against Manchester United and crave those successes again.

Wenger remains an outstanding manager, the most important and powerful figure at Arsenal and one of the game's deepest thinkers. He has earned that status through his success but he cannot ignore the obvious flaws in Arsenal's make-up even if they overtake United to win the title.

It is time for Wenger to inject more experienced and battle-hardened figures alongside wonderful young talent such as Jack Wilshere, a shining light again at Old Trafford but again forced to reflect on defeat with Arsenal's disappointed fans via his Twitter account, an all too regular occurrence these days.

Wenger must shed his reluctance to spend big to add the required quality in defence and midfield in the summer - again even if Arsenal do gather themselves and claim the title.

They now have a rare free week to recover from the buffeting they have suffered. How Wenger uses it will shape the rest of this season and perhaps beyond.

Arsenal still have much to play for and can now turn the optimists' eternal default option by saying they are concentrating on the league. This, in itself, is a stark outcome from a fortnight that may yet go down as a watershed in Arsene Wenger's reign.