Sir Alex Ferguson will be forced to share a home with his "noisy neighbours" for a day after Manchester City set up an FA Cup semi-final meeting with Manchester United at Wembley.

Ferguson mockingly applied the tag to City after their Abu Dhabi-based owners embarked on a high-profile transfer policy that lured Carlos Tevez from Old Trafford - claiming the answer to such a nuisance was to "put your television on and turn it up a bit louder."

The Scot will need to adopt more conventional measures to keep City under control as they claimed the place they crave alongside Manchester United on the biggest stage with a laboured 1-0 win over Reading at Eastlands.

United reign supreme in Manchester as Premier League pace-setters who are still in pursuit of the Champions League and FA Cup, but the first confrontation between the clubs at Wembley represents a huge opportunity for City and boss Roberto Mancini.

An all-Manchester final may have been an even more enticing prospect for some, but the semi-final will be mouth-watering enough to be going on with as they fight for the right to face either Stoke City or Bolton Wanderers.

Mancini is convinced City are moving closer to United, illustrating the distance between the sides by holding his thumb and finger just an inch apart. Now the Italian and his team have the chace to back up their brave talk with an FA Cup Final place as the prize.

He can produce recent hard-fought Manchester derbies as evidence, but the case for the prosecution will point to United's ability to invariably find a way to beat City, whether it is through last-minute goals from Michael Owen, Wayne Rooney and Paul Scholes - or simply via Rooney's remarkable overhead kick winner at Old Trafford last month. 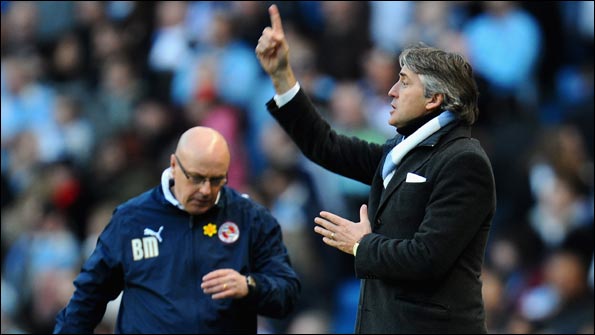 Mancini will be desperate to dethrone United as kings of Manchester

Mancini must hope he can alter the pattern. And what better place to find the solution than at Wembley as Manchester decamps to London for the day.

When news of the semi-final draw and a potential clash with United swept around Eastlands minutes before kick-off against Reading the reaction was underwhelming.

When referee Lee Probert sounded his final whistle and Micah Richards' 74th minute header had made the tie a reality, the reservations were replaced by defiance as City reached their first FA Cup semi-final since 1981 and took a step closer to their first major trophy since the League Cup win against Newcastle United at Wembley in 1976.

The importance of the moment was emphasised by the normally reserved Mancini's impromptu hug for goalscorer Richards, a radical departure for a coach renowned for keeping a carefully calculated distance from his charges.

For all the money spent at Eastlands, City's hierarchy will know silverware must be a return on this lavish investment. If they can claim United's scalp on the way to doing so then any bold talk of a possible future switch in Manchester's balance of footballing power will carry more credibility.

If City win a game of such importance and profile, it will provide the sort of injection of confidence and self-belief that even the Abu Dhabi chequebook would struggle to provide.

If United beat City at Wembley, it will tighten the stranglehold they have exerted for so long and keep those neighbours in what all at Old Trafford regard as their rightful place.

City's performance was scruffy, jaded and hardly the sort to fill United with unease, but it was a fully deserved win against dogged opponents who proved their danger by dispensing of Everton at Goodison Park in the fifth round.

In mitigation, it came after a trip to Dynamo Kiev and Europa League defeat on Thursday. Mancini must hope the sight of United in opposition at Wembley will fill any tired legs with new energy and he clearly feels he is due a win against the old enemy.

The former Inter Milan coach said after the recent loss at Old Trafford: "It is like my first two years in Milan. Every time we played AC Milan we didn't deserve to lose, every time we did. For the same thing to happen again is incredible."

And there may well be plenty riding on the game personally for Mancini as his conservative style means he still struggles to win universal acceptance at Eastlands.

As City struggled to break down Reading, plenty of voices could be heard urging Mancini to take positive action to solve the problem, which he eventually did by introducing the fragile, and occasionally allergic to grass, Mario Balotelli,

And with Sunday bringing fresh speculation linking Jose Mourinho with his job should City's season have an unhappy ending, victory against United will allow him to make a powerful statement of his own. A place in the FA Cup Final is invariably enough to ease discontent.

The Wembley meeting will be full of the twists and sub-plots that make FA Cup semi-finals magical occasions, even without the added spice of local rivalry.

Tevez will captain City, a talismanic figure and the biggest danger to the club he left in contentious circumstances when he switched allegiance from Old Trafford to Eastlands.

Ferguson, for his part, will not want the scar of Wembley defeat to City on his glittering cv - and his regard for the neighbouring regime was graphically illustrated in the aftermath of Tevez's departure.

An icy blast blew in the direction of Eastlands after City paraded Tevez on that infamous "Welcome To Manchester" poster, much to the old master's irritation.

Ferguson said: "It's City isn't it? They are a small club with a small mentality. All they can talk about is Manchester United; they can't get away from it. That arrogance will be rewarded. It is a go at us, that's the one thing it is. They think taking Carlos Tevez away from Manchester United is a triumph. It is poor stuff."

It is highly unlikely Ferguson's feelings will have thawed by the teams walk out side by side at Wembley, a day for a city to savour.