Gary Neville's vast legion of critics and admirers will all have their say after one of English football's most divisive figures announced his retirement with immediate effect - so let the facts speak for themselves.

Neville, 35, ends his playing career with one Champions League triumph, eight Premier League titles, three FA Cup victories, two League Cups, the Intercontinental Cup and the Fifa World Club Cup. And, of great significance in this era of player mobility, 602 appearances and seven goals for his only club, Manchester United.

If any footballer of the modern generation could use the phrase "show us your medals" in answer to those only too happy to pour cold water on his achievements it is Gary Neville.

Neville is on his way out of Manchester United after almost 20 years in Sir Alex Ferguson's first team and he leaves them where he always wants them to be, on top of the table and chasing another title.

He was part of Ferguson's great "Class Of 92", United's FA Youth Cup-winning side that also produced David Beckham, Ryan Giggs, Paul Scholes and Nicky Butt. Neville will now hope the surviving two members of that unique crop, Giggs and Scholes, can play their part in bringing a record 19th title to Old Trafford. 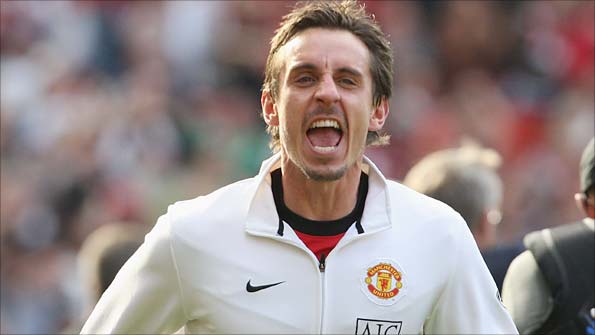 Neville, the outspoken 'Red Nev' who once threatened to lead an England players' strike when United team-mate Rio Ferdinand was banned for missing a routine drugs test, has polarised opinions throughout his career and will continue to do so.

At Old Trafford he was worshipped as the embodiment of Ferguson's philosophy - Manchester United against the world and give rivals not a shred of mercy.

Outside that world it is not too strong a description to say Neville was despised in some quarters, particularly at Anfield where he revelled in his ability to get under the skin of Liverpool fans.

Neville admitted his attitude was shaped by the success Liverpool had enjoyed at Manchester United's expense before Ferguson, to use his famous phrase, knocked them off their perch. It was an approach that made him a hate figure.

He was not exactly winning popularity contests in other parts of the country either for his unswervingly pro-United opinions and determination to speak his mind.

In among the honours there were also misdemeanours such as his highly-provocative goal celebration in front of Liverpool's supporters five years ago when Rio Ferdinand scored a last-minute winner at Old Trafford.

It was an act that cost him a £5,000 fine from the Football Association, but Neville was unrepentant as he said: "I believe it is a poor decision. Not just for me but for all footballers. Being a robot, devoid of passion and spirit is obviously the way forward for the modern-day footballer. And I ask the authorities, 'Where is football being taken?'"

Another black mark was his role in a failed players' strike in support of Ferdinand before England's Euro 2004 qualifier in Turkey, an action as ill-judged as the threat itself.

Former FA Executive Director Davies wrote as he recalled the incident: "I was informed Gary Neville was leading the charge against the FA. Somehow, this news did not surprise me. Gary was a leader, who cared passionately about those who sat alongside him in the dressing room.

"Some at the FA were stunned by the scale of the revolt stirred up by Red Nev. The new director of communications, Paul Barber, went in to talk with Gary and was almost knocked back by the strength of feelings.

"Such was the players' indignation there was even talk of a strike. No Rio, no game, came the message from Gary Neville. It sounded like there could be some empty seats on Thursday's flight to Istanbul. The players' desire to stick by one of their own was understandable, but the idea of a strike was far fetched."

And he was the provocateur last season at Old Trafford, even as a substitute, celebrating before Manchester City's devastated followers after Michael Owen's last-minute goal gave United a 4-3 win.

Episodes such as these should not be allowed to cloud the feats of one of the most provocative, enduring and successful personalities the Premier League has seen.

Neville was always a challenging interviewee, ever ready to throw questions back in the face of his inquisitors and always refreshingly ready with an opinion - and not caring whether you agreed or not.

Standards were never allowed to slip, or in Neville's case the standards applied at Manchester United.

When it was light-heartedly suggested to a senior Football Association figure in South Africa that Neville might have been a useful addition to England's 2010 World Cup squad, he recalled with raised eyebrows how he used to measure every single move the international circus made against what United would have done - not always favourably.

Awkward yes, outspoken yes, but fiercely driven in search of success, a success he invariable found. 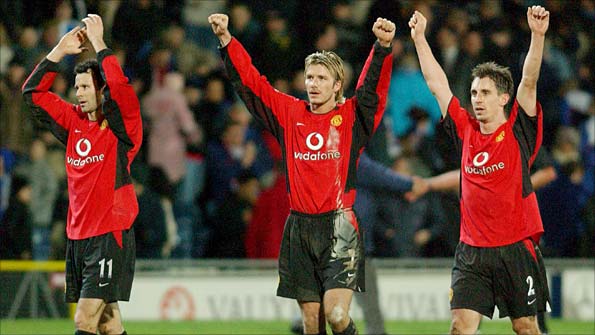 When I paid tribute to Neville on my Twitter feed after he made his decision to retire, the praise from United fans was matched by countless replies that were unprintable.

It would be an injustice to an outstanding player, the best English right-back of the modern era, if he was simply to be remembered and derided for a spiky and confrontational personality as opposed to his ability and achievements.

Neville was not just a United fixture, he won 85 England caps in an international career stretching across 12 years, playing in World Cups in France and Germany and three European Championships.

A superb defender with natural positional sense as well as a born leader on the pitch, Neville formed a right-wing partnership with Beckham that reaped rich rewards for club and country.

He even showed his strength of character in the latter days of his United career, battling back from injury problems that meant he did not make a league appearance in the 2007-08 title-winning season.

Neville may not have returned as the player he was before those problems, but he was still trusted by his mentor Ferguson. This season has been a mixed bag, however, and the fact that he was lucky to escape red cards at Stoke City and West Bromwich Albion may have crystallised his thoughts on retirement.

And his retirement should be accompanied by total respect for his achievements, even from the many who could not warm to his character. This is the very least a one-club man who became a symbol of a silver-lined Old Trafford era deserves.

As he goes, we can be certain we have not heard the last of Gary Neville - even his critics will agree with that.