Roy Hodgson has taken just 34 days to recover from the damage a short and traumatic reign at Liverpool inflicted on his reputation and is now ready to repair both his own standing and West Bromwich Albion's season.

When Hodgson secured his first Premier League win as Liverpool manager against the Baggies at Anfield in late August, he could hardly have imagined that, less than six months later, he would be handed the task of navigating them away from relegation.

And yet this is where Hodgson stands now, succeeding Roberto di Matteo at The Hawthorns after a fruitless spell at Liverpool that often amounted to little more than an exercise in public torture.

Hodgson, 63, has not been given the job on the basis of his time at Anfield - and it would be an injustice to define a competetent career by those six months of failure - but on the evidence of his work at Fulham.

When West Bromwich Albion's board decided to dispense with Di Matteo's services last Sunday, the increasing prospect of another swift return to the Championship will have been at the forefront of their thoughts. 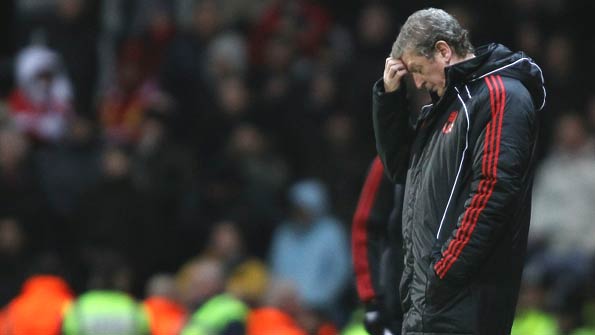 Also in their minds will have been Hodgson's reputation, pre-Anfield at least, as a mature, steadying hand on the tiller and a man who has proved he can engineer a miracle escape of the sort he accomplished after being appointed at Fulham in December 2007.

Hodgson does not yet need a miracle at West Brom, even though they currently only avoid the Premier League's bottom three on goal difference, but he needs to make a speedy impact after a season that started with such optimism under Di Matteo went into decline with 13 defeats in 18 games.

West Brom will want him to bring all his experience to bear to reverse this dangerous trend and they will be getting a manager with points to prove after the wounds he suffered at Liverpool.

As someone - and there were plenty of others - who felt Hodgson suited Liverpool's current circumstances at the time of his appointment, it was a shock to see at close quarters how quickly it became clear he was ill-suited and uncomfortable in the job.

Despite experience at Inter Milan, he struggled to come to terms with the size, profile and attention paid to every word and deed of a Liverpool manager.

At The Hawthorns the spotlight will not be as intense, the microscope not focused as unforgivingly, and this may make West Bromwich Albion a better fit for a manager who clearly feels he still has much to offer.

Hodgson will presumably start with a better approval rating than he did at Anfield, where his appointment as successor to Rafael Benitez was greeted with, at best, indifference. Many Liverpool fans expected better, despite the uncertainty surrounding the club's future ownership and Hodgson's appointment was regarded as low in profile and ambition.

He will also benefit from not being appointed ahead of any legendary figures in the history of The Hawthorns. Once Hodgson was given the Liverpool job ahead of Kenny Dalglish, there was the ever-present shadow of the Scot hanging over every defeat and poor performance.

And so it proved when the home defeat against Blackpool was played out against the backdrop of chants from The Kop for Dalglish's return. If Liverpool's supporters wanted ammunition they could use to demand the reappointment of Dalglish, Hodgson gave them plenty with other home defeats against Northampton Town and Wolves. The pressure soon became unbearable.

It is hard, however, to imagine Albion's fans demanding the reappointment of Ron Atkinson or the return of Gary Megson should they be slipping to a loss early in Hodgson's reign.

On the training ground, he may find Albion's workmanlike and less naturally gifted players more receptive to his repetive drills than some of Liverpool's stellar performers who perhaps wanted more variety and imagination in their work.

It worked for Hodgson at Fulham where the careers of players such as Bobby Zamora, Damien Duff and Danny Murphy were revitalised on a journey of discovery that led to last season's Europa League final.

And in the interests of balance, it is only right to point out that Hodgson was not the sole engineer of his eventual downfall at Liverpool.

He will point to circumstances conspiring against him, where he was robbed of key midfielder Javier Mascherano early in his reign and - something which became very clear in the aftermath of his move to Chelsea - he was working without the full attention of his superstar striker Fernando Torres.

He was criticised (with justification) for the signings on Christian Poulsen, Joe Cole and, in particular, Paul Konchesky but even his fiercest critics at Anfield may just be feeling a little more generous towards him for leaving Raul Meireles for them to remember him by.

Hodgson's reign at Liverpool will not be recalled with any affection by anyone involved and Anfield's history will unquestionably be cruel on his work, but his past suggests there is sound logic behind his latest appointment.

It was only last summer he was named manager of the year by his peers and would have been a prime candidate to replace Fabio Capello had he left his job as England coach.

This is not just a rebuilding process for West Brom, it also applies to Hodgson. He is entering the final phase of his career and as someone who guards his reputation jealously he will not want the Liverpool experience to be his lasting impression on the Premier League.

West Bromwich Albion will hope to be the beneficiaries of this motivation.