What would Beckham bring to Spurs?

If Harry Redknapp required a public prod to persuade Tottenham chairman Daniel Levy of the wisdom of his pursuit of David Beckham, he may just use the defeat at Everton as his prime exhibit.

Redknapp's desire to hand Beckham a brief return to the Premier League spotlight has raised familiar questions about the former England captain's true worth at this level in the twilight of an illustrious career.

How would a developing Spurs team built around the pace and width of Aaron Lennon and Gareth Bale in tandem with the midfield subtlety of Luka Modric and the thrust and threat of Rafael van der Vaart accommodate a 35-year-old whose best days are inevitably in the past?

Redknapp will not have enjoyed the loss against an enigmatic Everton side, but the consolation was that it allowed him to present his case for Beckham's capture on loan. 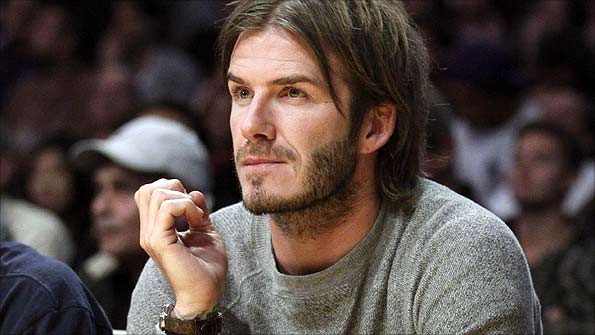 Beckham is awaiting developments in LA as Redknapp seeks to close a deal - photo: AP

Beckham's measured and slower style, combined with recent serious injury and a trade plied in the less demanding environment of Major League Soccer with Los Angeles Galaxy, appears to place him at odds with the methods employed by Spurs as they flourish in domestic and European competition.

But the manner in which Everton picked Spurs up and gave them a thorough going over for spells as they once more proved dangerous opponents for any side near the Premier League summit gave weight to Redknapp's case.

If Beckham does sign for Spurs, the deal will be greeted in some quarters as a pointless publicity exercise, a disruptive circus invited into a smooth and uncomplicated campaign that has seen Redknapp pushing the claims of his team as potential champions.

Already there have been accusations that Spurs would simply be Beckham's latest vanity project, something to keep his profile high in the American off-season. Redknapp has no time for such theories.

Even those of us who have questioned Beckham's place at elite level these days for club and country could make sense of Redknapp's explanation, delivered after defeat at Goodison Park, as to why he believes he would serve a purpose for Spurs, even in the very short term.

As Everton's verve and energy took hold in the second half and led to Seamus Coleman's deserved late winner, it was easy to imagine Redknapp enjoying the luxury of introducing Beckham to restore a measure of order and composure to a game that had escaped Spurs' control.

A little more street-wisdom would have benefited them as Everton's power and pace even overcame the threat posed by the wonderful Van der Vaart. This is what Redknapp sees Beckham providing.

Redknapp, who confirmed he had made his desire for Beckham's signing clear to chairman Levy, said: "I think we could do with his know-how. He could have something to offer us. I think he would keep the ball for us, because we didn't keep the ball in the second half when Everton really got at us. We just didn't get the ball.

"I think Beckham would get the ball out of his feet and provide quality and if Peter Crouch was playing and he could get balls into the box he could be the perfect foil. We showed with our goal that when we get the ball in we are dangerous with Crouchy up there, and David could do that for us."

There is an element of a gamble in Redknapp's decision to try and bring Beckham to north London on a short-term loan. If Spurs go into a slump while he is at White Hart Lane fingers will be pointed in his direction, even if he is not actually involved.

And there is the real prospect that Beckham would spend most of his time at White Hart Lane as little more than an interested and expensive observer, an intriguing sideshow to the main business of Spurs attempting to make an impact in the Premier League and Champions League.

Redknapp is unconcerned with this potential downside. Beckham would not be a starter for Spurs - an impact substitute, a controlling influence at crucial times would be the realistic extent of his contribution. He would be a temporary adornment to a gifted and strong squad rather than someone Redknapp would regard as central to his plans for the next three months.

Redknapp's attitude appears to be that Spurs would be in a no-lose situation by snapping up a consumate professional - and for all the cynicism Beckham attracts no-one must ever doubt his devotion to the game - whose presence and experience will provide a steadying influence in the all-important next three months.

He is highly unlikely to hand Lennon or Modric's place to Beckham in anything other than emergencies, but is banking on his presence around the dressing room, his experience of being in and around winning Premier League teams at Manchester United, to briefly assist their campaign. 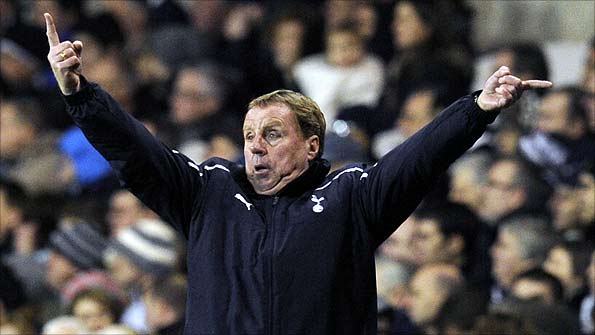 Redknapp was disappointed by the manner of Wednesday's defeat at Goodison Park - photo: AP

Everton manager David Moyes revealed his interest in Beckham recently. It was an interest that was declined in the politest terms - and in reality Everton's position in the middle of the Premier League and with no involvement in European football does not suit Beckham's purposes or profile.

Moyes, who suffered criticism from Everton's supporters after the loss at Stoke City, was able to revel in another impressive win against one of the top four, following up victory at Manchester City with this well-merited triumph.

And he was paying tribute to a wide man of his own in young Irishman Coleman, the busy and bustling figure whose energy and drive tormented Spurs.

The lavishly-gifted but frustrating Louis Saha put Everton ahead before Van der Vaart equalised - and as both sides traded punches, it was Coleman's diving header that cemented the Merseysiders' status as one of Premier League biggest puzzles.

Top teams present obstacles that can be surmounted, dig lower down in the table and Everton struggle.

Coleman, like Bale, is a converted defender and Moyes said: "Gareth Bale should always get major plaudits for the way he has played this season. He is an unbelievable talent but I have to say Phil Neville did a brilliant job on him.

"I also thought that if you talking about a wide player tonight you could only talk about Seamus Coleman."

Moyes will not be spending money in the transfer window but will hope this season of false starts and diminishing optimism will now gain momentum from another example of how they can compete, and beat, those with loftier ambitions and higher finances.

Redknapp will not dwell on defeat - and nor should he as he surveys Spurs' impressive development - but clearly feels even a swift injection of Beckham's experience and charisma will help prevent a repeat of disappointing nights like this.