When Roy Hodgson sang "You'll Never Walk Alone" on his final Anfield appearance as Liverpool manager against Bolton Wanderers, he may have been too wrapped up in his own perilous position to appreciate the irony.

If ever a man walked alone and out of tune with Anfield's anthem it was Hodgson - an invisible presence to The Kop for most of his Liverpool reign and deserted by so many of his players in his hours of need.

The only time Hodgson attracted attention was when Liverpool's supporters demanded his removal or the return of Kenny Dalglish to the managerial chair the 63-year-old has occupied so uncomfortably since July.

Hodgson's departure from Anfield by mutual consent marks the low point of a steep decline in fortunes for the man named manager of the year at the end of last season and touted as a prime candidate to replace England coach Fabio Capello had he left after the South African World Cup debacle.

Hodgson was feted by his peers only seven months ago as he stood proudly in Hamburg's Nordbank Arena after taking Fulham to the Europa League final, only to lose to Atletico Madrid.

A few weeks before he was afforded the rare accolade of being applauded into Craven Cottage's press room by the media after the semi-final win against Hamburg.

It was against this backdrop that Liverpool's board made an understandable decision to hand him the reins as Rafael Benitez's replacement, a safe pair of hands to see the club through a transitional period and an imminent change of ownership. 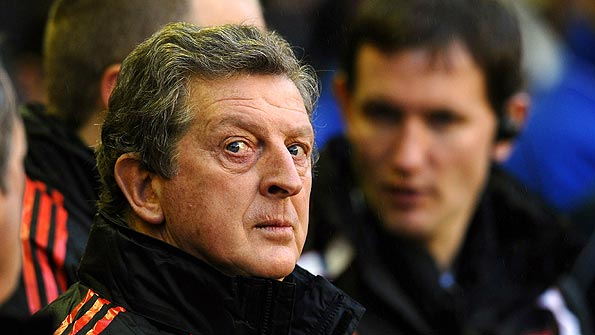 Roy Hodgson left Fulham in the summer to move to Anfield. Pic: Getty

Little did Hodgson realise when he strolled into the Anfield sunshine in July to be paraded as Liverpool manager that the appointment he described as "the pinnacle" of his long career would be laced with poison.

Hodgson was greeted with ominous indifference by Liverpool's supporters, a sign of things to come as he failed to capture their imagination and establish a connection with a fanbase that likes to think it has a unique bond with their managers. It is a connection he failed to make.

He was on the back foot when Dalglish, one of the most iconic figures in Liverpool history, declared his interest in the post only to be unceremoniously ignored by the club's hierarchy in favour of Hodgson. The spectre of the Scot has hung over Hodgson through every bad performance, his name never far from the lips of fans unimpressed by the new man at the helm and Dalglish has now been put in charge for the rest of the season.

The sceptics might have been won over by a fast start, but even that was denied him when what should have been a deserved opening day win against Arsenal was wrecked by the normally reliable goalkeeper Pepe Reina's injury-time own goal.

Hodgson leaves Liverpool with indelible scars on a reputation that was glowing upon his Anfield arrival - but to suggest this has been solely his own work does him a grave injustice.

He inherited an unbalanced and poor quality squad from Benitez, top heavy with mediocrity and over-reliant on a small group of high-class operators. The festering ownership issue and the acrimonious farewells of Tom Hicks and George Gillett did not help his cause.

Hodgson also had to deal with the messy departure of Javier Mascherano to Barcelona, thrust upon him in the hours before an away loss at Manchester City that set the tone for so many miserable Liverpool showings on their travels this season.

And as Liverpool's season turned sour, he was robbed of Steven Gerrard when he was injured on England duty and Jamie Carragher for three months after he suffered a shoulder injury at Tottenham.

Hodgson faced a major reconstruction of Liverpool's playing staff when he took over. It is something he performed with limited success.

Instead of weeding out the chaff he only succeeded in adding to it. Raul Meireles apart, the signings of Joe Cole, Christian Poulsen and Paul Konchesky have been failures. Indeed the last two names are making a compelling case for inclusion in the Black Museum of Liverpool signings, and there has been stiff competition for places in recent times.

And performances so bad they might almost be treated as landmarks, such as Anfield losses to Northampton Town in the Carling Cup and newly-promoted Blackpool in the Premier League, saw Hodgson lost forever in the eyes of many Liverpool supporters.

Those fans were alienated in such numbers, almost to the point of mutiny, that Hodgson could only survive via the sort of results Liverpool in their current guise never looked remotely like achieving. There is little doubt an online petition demanding his sacking will have been swollen by mischief-makers as it reached 19,000 signatures - but the underlying revolt among Anfield's regulars could not be dismissed or ignored.

More significant votes were cast with feet, as only 35,000 came to Anfield for the New Year's Day win against Bolton and swathes of empty spaces were seen in the visitors' section, almost unheard of in recent history, for Liverpool's defeat at Blackburn on Wednesday.

As the dust settles on this unhappy and unfulfilling chapter in Liverpool's history, it would be wrong to heap all the blame on Hodgson's shoulders as he departs. Yes, he has been guilty of poor management but plenty of Liverpool's players had a hand in his downfall.

Carragher and Gerrard's performances and attitude never wavered despite Hodgson's reign crumbling around them, but even the impeccable Reina showed signs of strain while Fernando Torres was a shadow of himself under Hodgson.

Torres helped provide a rare highlight for Hodgson with two goals that beat Chelsea, but too often he has cut a sullen and disaffected sight, at odds with the world and with seemingly little appetite to lift himself out of his slump. The body language screamed out his discontent and too many times when his manager needed him he was not to be found.

The Spaniard can rightly point to poor service and lack of quality support, but missed chances at Spurs and Newcastle and disappearing acts elsewhere have also tarnished the status of the striker who once rivalled Gerrard as Anfield's golden boy.

Hodgson was critical of Glen Johnson's performances earlier this season, but the England defender did little to prove his manager wrong and has given scant return on Benitez's exorbitant £18m investment.

The manager's sure touch and experience also deserted him at vital moments as he failed to deliver the messages Liverpool fans wanted to hear. Such messages might be regarded as immaterial at most clubs but they are essential, it seems, at Anfield.

Hodgson should not have been expected to undergo a personality transformation on his appointment at Liverpool but there was little doubt that he missed chances to stamp his authority on affairs and make his mark in the minds of supporters.

I was at Old Trafford when he tamely declined to defend Torres in the face of criticism from Sir Alex Ferguson and when Liverpool fans departed Goodison Park in fury after being outplayed by Everton, Hodgson was in denial as he attempted to apply gloss to a desperate display.

Hodgson's perceived criticism of a lack of support from Liverpool's followers after an abject home defeat against Wolves was the act of a man penning his managerial suicide note. It was this game, and its aftermath, that ultimately proved the last straw for Fenway Sports Group.

For a character of such vast and cosmopolitan experience, he looked strangely out of his depth from an early stage at Anfield. Even spells at Inter Milan, it appeared, had not prepared him for the pressure, scrutiny and analysis of every spoken word that is part of the package as Liverpool manager.

He was never likely to be part of FSG's long-term plans once they completed their takeover, but there was no desire for an early change of manager and there was a genuine realisation and understanding that Hodgson had taken charge of a deteriorating team.

John W. Henry was always going to appoint a younger and more progressive coach to work under his new director of football strategy Damien Comolli in time, but results, performances and perceptions hastened Hodgson's demise dramatically.

There will be sympathy for Hodgson, a proud and decent man who has worked tirelessly but in vain to turn Liverpool around, but brutal reality dictates this was the only decision FSG could take - even if it was quicker than they would have liked.

In some respects, Hodgson's departure may come as a blessed relief as managing Liverpool appeared to have become a miserable, debilitating experience. He still has enough credit in the bank to attract offers from elsewhere when he wishes to resume his managerial career - but there will be few days at Liverpool that he will ever look back on with affection.