The natural gift that persuaded Gerard Houllier to part with £24m was encapsulated in Darren Bent's first - and indeed only - significant contribution of a triumphant Aston Villa debut.

Bent made contact with the ball a mere 27 times in 90 minutes, but his appeal to Villa was illustrated in the decisive touch that beat Manchester City and made the first repayment on Houllier's lavish investment.

He was barely seen before or after the 18th minute when he reacted first to a loose ball as City keeper Joe Hart pushed out Ashley Young's shot, scoring with the minimum of fuss from an angle in a moment in which the match was won.

Bent's critics paint a picture of a player of limitations, but Houllier and Villa will be happy to work within them if his strike rate remains as efficient as it was here. 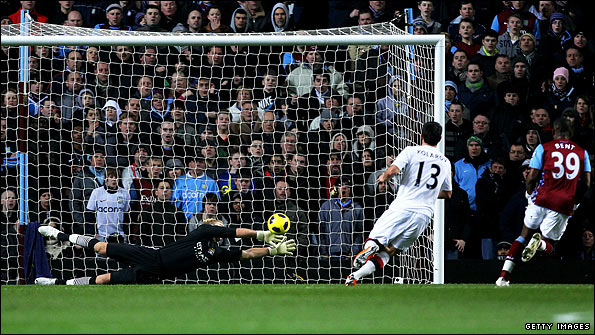 Bent has scored on debut at two previous clubs, Charlton and Sunderland

He has become, at the end of a week of acrimony with former club Sunderland and manager Steve Bruce, the symbol of the new Houllier era at Aston Villa.

Bent's signing is the show of faith from owner Randy Lerner that confirms Houllier is at Villa Park for the long haul - and is a statement of intent from the manager that he is now building his own squad to replace the one he inherited from Martin O'Neill.

Houllier's own stock will rise with results such as this against a City side with designs on the Premier League title and beyond, while Bent's presence galvanised Villa's fans and gave renewed confidence to team-mates who know they have a new match-winner in their ranks.

Bent was tireless, mostly without the ball, but his business is goals and for all the nit-picking about technique and talent there are few more reliable marksmen in the domestic game.

He displayed an economy and ruthlessness in front of goal that would have served Roberto Mancini's side well as he won the £51m battle of the strikers with City's own stellar signing Edin Dzeko.

Dzeko had an unfulfilling match which included wasting one of City's best chances with a late header. The Bosnian's partnership with Carlos Tevez is still a work in progress, but this tall and elegant figure showed enough in flashes to suggest he will be a big success at Eastlands and a real threat once attacking bonds with his colleagues are forged.

He has all the hallmarks of a class act and his willingness to get around the pitch as well as into the danger areas bodes well for Mancini and City in the vital weeks ahead this season.

This was Bent's day, however, and after the ill-feeling provoked by his abrupt departure from The Stadium of Light he looked relieved to be back and doing what is comes naturally, namely scoring goals.

Early days it is true, but the buoyancy from Houllier and Villa's players as they kept City at bay to earn three points was another sign that optimism may be returning after the dark early days of this season.

Houllier believes the 1-0 win against City was not simply the result of Bent providing end product that has been missing before, but the culmination of a steady improvement since the turn of the year.

He said: "Darren's finishing touch was that of a natural born goalscorer. You can't teach this and he was full of composure. This is why he is here - to score goals and help us to win football matches at Aston Villa.

"The boy handled it all well after all that has happened this week. I think he was ready to play. It is easy for him to settle in because he knows a lot of the players through playing with various England teams. He is a good lad and I'm pleased for him."

He added: "I think we hit rock bottom when we lost 4-0 at Manchester City last month. We are together a bit more, working together a bit more and this is, of course, a fantastic result for us given the quality of the opposition. Slowly we are getting stronger, mentally and physically."

Houllier did his best to assist Bent by providing him with plenty of attacking support in the shape of Gabriel Agbonlahor and the excellent Marc Albrighton, with Young and Stewart Downing also providing supply lines.

And it was not simply Bent who gave Houllier pleasure. He found star men elsewhere in a performance he described as "immense" and a result that eased Villa's concerns about hovering in and around the Premier League drop zone.

If Bent wrote the headlines, Villa's real heroes were defenders James Collins and Richard Dunne. Collins put his body, often literally, in the way of every moment of danger while the ponderous and disaffected Dunne of a few weeks ago was replaced by the mountainous defensive barrier of old.

Houllier has hardly been awash with high points since taking over at Villa Park last September, but some of the criticism has been extreme as he has been unable, until now, to put his own stamp on the squad left behind by O'Neill.

And Lerner's sanctioning of the club record deal for Bent silences any lingering suggestion that Houllier would not be around to undertake further reconstruction in the summer. This alone removes some of the uncertainty and rancour he has been subjected to.

This was Houllier's best day since arriving - but it was a day Mancini and City may yet look back on with great regret when the final calculations of this season are made.

For all the attacking riches on display such as Dzeko, Tevez, David Silva and with Adam Johnson introduced early in the second half, the impression remains of a team, to use one of Arsene Wenger's favourite phrases, playing with the handbrake on.

And if the handbrake was not on, then this at least seemed a City side reluctant to hit top gear, especially in the first half when they cut a relatively timid presence.

Mancini's default position is conservatism and while his philosophy is never going to allow City's wonderful attacking flair players to cut loose and run free, they would surely benefit from being let off the leash a little.

It was only in the second half that they applied serious pressure and by then Collins and Dunne had drawn the battle lines. Villa enjoyed a moment of good fortune when Ciaran Clark deflected Nigel de Jong's shot on to a post late on but no-one could seriously begrudge them their luck.

Whether it is under orders from Mancini or an unlikely lack of self-belief from such a talented group of players, City can present a frustrating spectacle and this was one of those occasions.

Houllier and Villa, in contrast, were jubilant. They needed an inspiration as much as the Holte End needed a new hero after such a miserable season and Bent penned the perfect script.