As Ian Holloway requested a hammer and a pen-knife to build a statue to Charlie Adam after he added lustre to his reputation and millions to his price tag, Manchester United were erecting a new monument to the indomitable spirit fostered by manager Sir Alex Ferguson.

Adam, coveted by Liverpool and Aston Villa but valued far in excess of the £4m currently on offer, was the inspiration behind 72 magical minutes that placed Blackpool on course to wreck United's unbeaten record in the Premier League this season.

And yet, in a match stretched to 100 minutes by an injury to Rafael da Silva, United again performed their time-honoured trick of manouevring themselves out of the tight corner they had been backed into by a brilliant Blackpool performance, running out 3-2 winners. 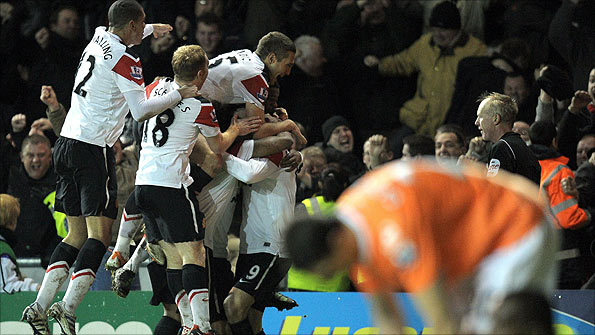 United can thank good fortune, old masters on and off the pitch and that priceless ability to rise from the canvas for a victory Ferguson may yet regard as defining moment of their league campaign.

Blackpool were total value for the 2-0 lead they secured at half-time through headers from former Man Utd youngster Craig Cathcart and DJ Campbell. And only referee Peter Walton will know why they were denied the opportunity to score a third by ignoring an obvious penalty claim when Rafael clumsily bundled Luke Varney to the floor in the area early in the second half.

It was the moment of luck United needed. They pounced on it to hunt down Blackpool and turn this thrilling encounter on its head.

Ferguson responded audaciously to United's desperate plight by removing off-colour Wayne Rooney after 66 minutes and replacing him with Javier Hernandez. Brave and bold, but rewarded with a change of mood that won the game.

The little Mexican predator sandwiched a goal in between two strikes from Dimitar Berbatov and a game that looked all but lost was suddenly won. An unbeaten record that looked set to end continued - and with it came a five-point lead at the Premier League summit.

And as United's supporters tucked away in a corner of Bloomfield Road celebrated ecstatically, it was Ferguson who was the match-winner as much as his players. He was vindicated in replacing Rooney, even with his team two down, and in Hernandez he has unearthed a poacher who may become his next Ole Gunnar Solskjaer.

The introduction of Giggs at the interval gave United a measure of order after a wretched first half. Ferguson's half-time team talk was unlikely to have stopped with the use of his infamous "hairdryer" - it was more likely that a flame thrower was produced. United were that bad.

Giggs set the tone and steadied the side before Hernandez took over from Rooney and helped Berbatov leave Blackpool shell-shocked at the final whistle.

Blackpool captain Adam provided the sub-plot before the game as every appearance shapes up as his last for the club. Holloway insisted Adam would be desperate to play against United even though his mind has been clouded by a transfer request and Liverpool's interest in particular,

Play he did, and in a manner that backed up every sentence of Holloway's insistence that offers of about £4m will be laughed off by Blackpool's owners.

Adam remains a Bloomfield Road favourite despite his unrest. Supporters cheered him to the echo before kick-off and a young fan touchingly brandished a "Don't Go Charlie" poster in an attempt to tug on the heartstrings.

Until United finally managed to exert a measure of control on Adam, he demonstrated with every touch why Holloway feels no amount of money would adequately compensate for his departure in the next week.

Adam was in the wars early on with an elbow injury, but recovered to show his steel in a challenge that left Patrice Evra with a bloodied face. And despite the chunky build, there is real finesse and touch to his game with one nutmeg on Darren Fletcher drawing huge appreciation.

He demonstrated a full passing range but the real weapon in his armoury was a killer final delivery. As well as producing corners for both Blackpool goals, a torturing cross almost caused Nemanja Vidic to head into his own net.

Holloway was as passionate as ever as he stated his case to keep Adam. It is clear his departure would be a damaging blow to a Blackpool side that has lost five out of six league games, no matter how gallantly they performed against United.

Blackpool are not exactly in freefall but they will fear the loss of momentum they have suffered in recent weeks would only be exaggerated by the departure of their most influential performer.

It is a huge dilemma for Holloway, hurting badly but full of admiration for his team as he said: "In the morning I will feel like I have been kicked in a very delicate place but then I will think of how proud I am of my team and my club."

Blackpool's last stint in the top tier of English football ended with a draw against Manchester United 40 years ago. For so long, against those same opponents, the Seasiders showed exactly why their continuing presence in the Premier League this time would be appreciated.

The wild switchback ride of those last 18 minutes broke Blackpool's hearts but they are big enough to come again. They were fearless, positive, but they were simply the latest victims of United's refusal to accept defeat.

Many sides would have written the night off as a bad job after plumbing the depths as United did for 45 minutes, but it is the mark of champions to stay upright and in shape to deliver three deadly blows in the closing stages.

Rooney's form remains a mystery, camped out on the left and reduced to a marginal figure and not much better when moved into the centre. Will there come a time soon when Ferguson feels the need to pull him out of the action, especially with Berbatov on a golden run and Hernandez such a threat?

If Rooney is suffering, Giggs is quite simply a phenomenon. Still so elegant and effective, his mere presence on the pitch galvanised United - the constant cajoling as crucial as his enduring ability with a ball at his feet.

He was vital, along with Ferguson's own gambler's instinct, that the door that may just have seemed ajar for United's title rivals for 72 minutes at Bloomfield Road was suddenly slammed shut.