Unloved and now mocked at Anfield, Roy Hodgson says he is still waiting to hear the famous support of Liverpool's followers. He may be waiting some time.

Liverpool's new owner John W Henry and his Boston-based cohorts must also be pondering the level of backing they can continue to give a manager whose faltering reign is now provoking an almost mutinous response for a fanbase famed for unswerving loyalty.

Hodgson had the silent treatment from The Kop for six months following his arrival from Fulham. When the 63-year-old was finally acknowledged, he received the sort of recognition he could do without.

As Liverpool slipped to a 1-0 home defeat against Wolves, the kind of dismal reverse that has characterised their season, Anfield delivered its most damning verdict yet, serving up ironic chants of "Hodgson For England" and adopting the traditional default position of calling for the return of Kenny Dalglish.

The fact that Hodgson chose to return fire by effectively criticising the fans for their lack of backing suggests no amount of counselling or consolation will repair this broken relationship. 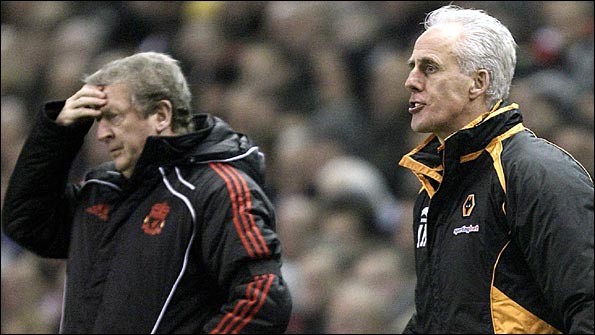 Hodgson was stating facts when he highlighted the dearth of personal support. Liverpool's fans could be equally factual by replying that anyone blinking might have missed any moments of quality from his team at home this season. As high-risk strategies go, complaining about supporters in times of turmoil is right up there.

Hodgson was a logical choice by Liverpool's board to succeed Rafael Benitez. Mature and experienced - not to mention manager of the year after taking Fulham to the Europa League final - he looked the perfect fit to oversee what would inevitably be a transitional period on and off the pitch.

It was an appointment, however, that was greeted with a wave of indifference by supporters who craved a more high-profile figure. Needing a fast start, Hodgson stumbled as events off the field conspired against him and he proved incapable of coaxing any consistency or quality out of the squad Benitez left behind.

The Carling Cup loss at home to Northampton knocked a hole in his credibility, a hole made bigger after being outplayed at Anfield by newly promoted Blackpool. Liverpool's dismal away form has not helped, while The Kop's corrosive reaction to the defeat against Wolves appears to have ensured the last droplets of support from the fans have drained away.

New signings - Raul Meireles apart - have been failures, while Hodgson's reign now carries all the hallmarks of one that will limp to a conclusion at some point between now and the season's end.

Hodgson - and he deserves sympathy here because he cannot pretend to be a personality that he is not - has failed to capture the imagination of Liverpool's supporters. They were angered by his tame reaction to Sir Alex Ferguson's criticism of Fernando Torres after the defeat at Manchester United as well as the cosmetics the former Inter Milan boss applied to Liverpool's display when they were well beaten at Everton.

Conservative tactics have also drawn criticism, while even victory over Chelsea only qualified as brief respite for the increasingly beleaguered Hodgson.

Liverpool owner Henry now faces a huge call. Does he react to such open discontent - not towards him or his NESV colleagues it should be stressed - by sacking his manager or does he continue to map out the long-term strategy and wait until the summer to make a change?

Whatever the American decides, it would take a transformation of almost unfathomable proportions for Hodgson to survive at Anfield any longer than the end of this season. The end may come even sooner if the current decline accelerates.

He was regarded as a safe pair of hands - not so safe as it has transpired - but the new owners have increased ambitions for Liverpool. What they have already been able to decipher on and off the pitch means it is unlikely Hodgson will play a part in their vision for the years ahead.

The Kop has made it clear they want the return of Dalglish but the Scot would probably want to call all the shots himself and Henry has already made it clear Damien Comolli is his man as director of football strategy. So where would Dalglish fit in? 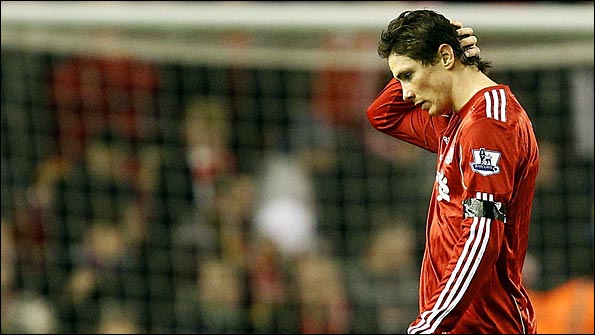 Striker Torres is out of sorts and he continues to toil. Photo: PA

If Hodgson wants sympathy and understanding, then former Liverpool midfielder Jan Molby, a regular observer of his reign this season as an expert BBC summariser and supporter of the club he represented with such distinction, has some to offer.

"I don't think Roy can be blamed totally for what has happened," said the Dane. "There are things you can't defend, like his signings and some of the performances. He knew Paul Konchesky and thought he would do a job but that hasn't worked out, while Christian Poulsen has found the Premier League too much for him.

"Joe Cole has been a major disappointment. Despite the delight from Liverpool's fans when he signed, I was never overexcited about him. I have never been convinced. He was on the bench at Chelsea and he has been on the bench for England. He is what he is - a subsitute who could have an impact coming on."

Molby also mounted a defence for Hodgson as he added: "He inherited an unbalanced squad with no real wide men. Dirk Kuyt and Maxi Rodriguez play there and yet they have no real pace. They can't get behind defences and get crosses in.

"The striker situation was never addressed in terms of back-up to Torres. To go so many transfer windows without getting a striker in was criminal. Liverpool have paid the price.

"Almost the first thing he had to do was sell Javier Mascherano with little time to buy a replacement, although Meireles has shown his quality. To come to Liverpool, a club with high expectations, and know the squad is not what you need makes life very difficult.

"He has been unlucky with some of his big players as well. Steven Gerrard got injured playing for England, Torres just hasn't fired and now Jamie Carragher is out for three months. As I said, there are things you can't defend but there are other things that have been out of Hodgson's control."

How Hodgson turns around his deterioating relationship with Liverpool's fans that is at best stone cold and at worst nakedly hostile is almost impossible to work out, unless he conjures up a string of results his current squad look totally ill-equipped to achieve.

"The relationship with the fans is a problem," said Molby. "The whole atmosphere at Anfield and the relationship between Roy and the fans is most unlike Liverpool. He never even got a welcome at his first game, which is almost unheard of for any new Liverpool manager.

"I was at that game at Arsenal and watched specifically for the reaction he got. Apart from a few people around the technical area, there was no reaction. The Wolves game was the first time Liverpool fans have chanted Hodgson's name - and it was only to be sarcastic, which is not a great sign.

"Maybe the fans were hoping for better. Over the last three years, when there was speculation about Benitez's future, there was talk of Guus Hiddink and Jose Mourinho. They were never going to come to Liverpool at the time Roy got the job.

"That is not to say Liverpool could not attract a top manager from abroad. I think Louis van Gaal would walk to Anfield to take the Liverpool job."

As the storm clouds gather around Hodgson, Molby believes Liverpool's new hierarchy is more likely to favour taking its time mapping out a long-term strategy rather than take the option of sacking the manager unless the situation deteriorates even more dramatically. It is a policy he agrees with.

"I think he should get more time," said Molby. "This is a bad, bad time to change managers unless the one you specifically want is out there walking around without a job. Who are they? They are Martin O'Neill, Frank Rijkaard, Sam Allardyce and Martin Jol, who wouldn't want to come and work with Comolli again after their time together at Spurs.

"This is a really important period for the new owners. They are assessing everything and I think there will be upheaval in the summer.

"I don't know whether this will include a change of manager but it might mean losing one or two players Liverpool might not want to lose, such as Torres and Pepe Reina, to bring some money in and to start rebuilding and overhauling things."

Hodgson faces the disaffected fans again when Bolton visit Anfield on New Year's Day. Another defeat will push him even closer to what seems to be an inevitable fate.