No matter how much derision is heaped upon Haye and Harrison ahead of Saturday's WBA title fight at the MEN Arena - and there is plenty of it - they will have to try very hard to come up with anything as punchless and unspectacular as this goalless draw. Indeed, if the pair needed something to make them look good ahead of Manchester's second big sporting collision of the week, this game provided it.

The old boxing adage states that the challenger must come out and show enough to claim the crown from the champion. He will not be given the titles, he has to take them.

In this football context, Manchester City - and in particular coach Roberto Mancini - showed nowhere near enough boldness and ambition to back their claim that they are now standing on United's shoulder. 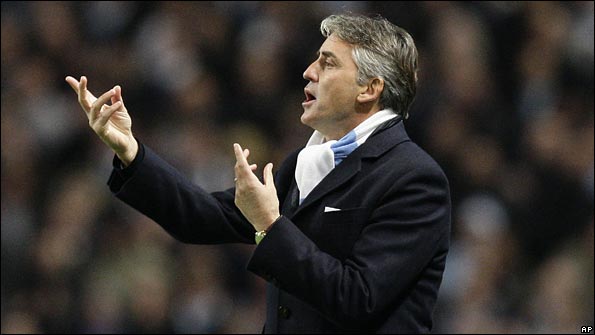 Mancini was pleased with his night's work and did not seem bothered that the game was little more than an eyesore from start to finish. In practical terms, the Italian had a case.

City failed to take a point off United last season, so they have improved on that record. They also kept a clean sheet and now have a four-point cushion between themselves and fifth-placed Newcastle United as they look to cement their place in the top four.

Mancini says this is a sign of progress - and it is hard to argue with him. But his negative approach drew ire from many City fans, who, rightly, felt their side's attritional style at Eastlands meant they were unable to make the most of their opportunity. This great old club's new-found lofty ambitions will not be served by simply drawing satisfaction from not losing to Manchester United.

City were in opposition to a United team undermined by illness and injury - Wayne Rooney is rehabilitating in the United States, while Ryan Giggs missed a derby for the first time in 19 years - and still scratching for their best form despite an unbeaten start to the Premier League season.

If not exactly there for the taking, United hinted at vulnerability. Mancini's response was a game plan based around cautious containment, devoid of the slightest hint of adventure.

Mancini will no doubt argue against this but City looked as though they did not know how to go about winning the game. Draped in a cloak of conservatism from the start, they did not so much have the handbrake on as have breezeblocks in front of all four wheels.

If this may seem a harsh commentary on City while sparing United any criticism, then it should be stated Ferguson's side were not much better. The onus, however, was on City to take the game to United and demonstrate that they are more than "noisy neighbours".

Instead, Eastlands was reduced to near silence by the final whistle as both sides settled for the draw that looked inevitable almost from the kick-off.

Carlos Tevez was a lone striker of sorts, although he ended up defending near his own corner flag in the second half. When the game called out for variety and unpredictability, Adam Johnson was left on the bench until only 17 minutes remained.

Yaya Toure is many things but he is not best suited to playing the role of midfielder in closest attendance to a one-man attack. It has worked on occasion but using this hulking figure in that role cannot be a serious long-term proposition. 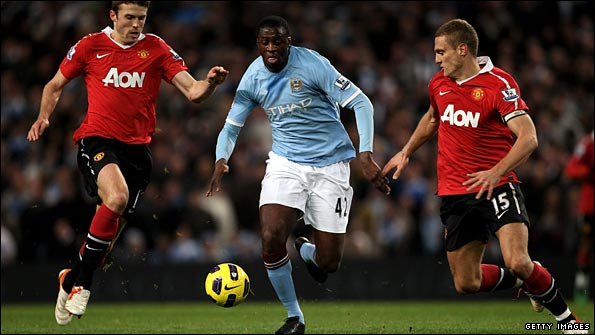 And, comically, when Emmanuel Adebayor was summoned to replace Tevez with seconds left, the Togo striker took longer to get stripped and ready than a teenager preparing for his first date.

If he was reluctant to emerge into the Manchester cold, no-one could really blame him. How could he be expected to make any sort of serious impact in his allotted slot? The idea of a £25m forward being used as a time-wasting method did not reflect well on Mancini.

True, Mancini was robbed of the mercurial Mario Balotelli but is it really in his nature to throw caution to the winds and tell his team to go for it? No-one would suggest all-out attack is a guarantee of success against United but just a small element of risk might help.

The feeling that a trick is being missed by Mancini also comes with the knowledge that Chelsea have stuttered while Manchester United and Arsenal have been unconvincing.

City may not win the Premier League but fortune has been known to favour the brave. Mancini, however, is obviously not a man to chance his arm.

Once United sized up the extent, or lack, of City's threat they cruised through untroubled to the final whistle. Goalkeeper Edwin van der Sar was stretched only once, by a Tevez free-kick in the first half.

Centre-half Nemanja Vidic was outstanding but, with Rooney out and Javier Hernandez on the bench, City keeper Joe Hart only had to field two tame efforts from Patrice Evra and Dimitar Berbatov, who was replaced by Hernandez with 12 minutes to go.

In their reduced circumstances, United were happier with the point but there was a sense of frustration from the home support. They expect more by way of invention from a squad that has had so much finance lavished on it - and no-one should blame them.

Mancini will, by his own standards, have to gamble at some point because there is a real chance for City to progress further up the Premier League table with the quality at their disposal and the window to invest further in January.

No-one with Mancini's record can seriously be labelled a tactical faintheart but City's aspirations to claim the major trophies will be helped by a release of the shackles.

City had the chance to show United they mean business on the field as well as off it at Eastlands. Mancini's caution, however, meant the opportunity passed them by.