England and France returned from the World Cup as the sick men of European football - but Wembley was left in no doubt which patient is further along the road to recovery.

Fabio Capello's night started with a Steve McClaren-style fashion disaster as the Italian took to the touchline with a baseball cap perched awkwardly on his head. It ended with a Twitter savaging from a furious Liverpool fitness coach.

Sandwiched in between was a defeat by France that was far more emphatic than a 2-1 scoreline suggests, a gruesome exposure of England's current limitations.

Capello, understandably given England's list of absentees, decided to take a glimpse into the future. On this evidence, the future looks no brighter than the past.

In Capello's defence - and not too many were jumping to it at Wembley on Wednesday - it is only right that this result, and indeed the game itself, is placed in context.

It was a friendly and England were stripped of a host of experienced players and the attacking resources of Wayne Rooney, Jermain Defoe and Darren Bent, which meant the manager was effectively forced into fielding a makeshift line-up.

France were closer to full strength, although they were missing the not inconsiderable talents of Patrice Evra and Franck Ribery.

But even these mitigating circumstances cannot be used to disguise the technical and tactical deficiences exposed by France, a nation that had an even more disappointing and divisive South African campaign than England.

The contrast between the accomplished and precise passing, control and movement of the French when set against the lumbering - almost prehistoric - approach of England was so stark as to be painful.

Good use of possession, different points of attack, invention, mobility and variety - all assets France had in abundance but were beyond England on this night, qualities that have often been out of their reach against teams of the highest quality.

Wembley expressed its derision at both the half-time interval and the final whistle, angry at seeing England flounder once more in the face of technically superior opposition, as they do on a regular basis.

England's debutants had varying fortunes. Andy Carroll made a promising start to his international career despite being starved of meaningful service. Wembley's ovation when the Newcastle United striker departed after 70 minutes was well merited.

Jordan Henderson looked like an over-promoted youngster in midfield, which may well be exactly what he is, but this was a daunting occasion and some of his more illustrious colleagues struggled just as badly. His chance will come again.

Samir Nasri and Yoann Gourcuff more or less reduced Henderson to a watching brief as they dictated terms but the Sunderland player received no assistance from the declining Gareth Barry, who must be vulnerable to replacement by Frank Lampard once the Chelsea man is fit, or perhaps Everton's Jack Rodwell. 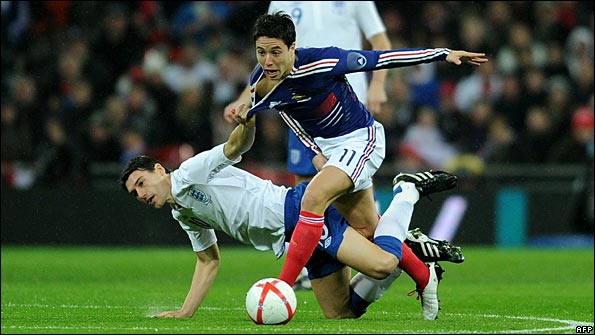 The declining form of Barry must be a concern for Capello. Photo: PA

West Ham United's Scott Parker must have watched Barry's performance and wondered either what he has to do to win England recognition or what he has done to have a line crossed so conclusively through his name.

Arsenal full-back Kieran Gibbs, winning his second cap, mixed too many mistakes with some decisive tackles, again only to be expected from a youngster who is not even a regular at club level.

Such was France's superiority in every facet of the game that England might almost regard only losing 2-1 as a moral victory. Outflanked and outthought, France sailed serenely into a 2-0 lead with goals from Karim Benzema and Mathieu Valbuena.

Peter Crouch's late goal, his 22nd in 42 internationals, applied a veneer of respectability England's performance did not deserve, a display that hinted at stagnation in the face of France's rejuvenation.

While France passed, probed and moved in the classic style, Capello's England - when they actually retained possession - relied on the old-fashioned lumpen launch to unsettle their opponents. It worked in the closing stages but England's track record against teams with pedigree suggests it is not a ploy that wins games - and it was never going to win this one.

As I suggested after England's Euro 2012 draw with Montenegro at Wembley, it may be time to accept that they are a second-rate footballing nation. France might have considered themselves to be in similarly reduced circumstances after the World Cup but their progress appears to have been rapid under the cerebral guidance of Laurent Blanc.

England and France took different routes following their South African debacles. The Football Association stuck with Capello in the absence of any other serious candidate or any appetite for change, while the French Football Federation ended the madcap reign of Raymond Domenech by appointing Blanc.

Blanc did start with an advantage in that the suspicion always lurked that there was a good side trying to escape in France, only to be held back by the eccentricities of an awful coach. Blanc has started by restoring harmony to the camp before applying the skills that made him such a formidable operator at Bordeaux.

England cannot be condemned on the strength of an experimental team's defeat against a French team in renaissance but the gulf in class was so vast that it surprised even the most pessimistic observers.

The FA and Capello are now locked into each other, some might say stuck with each other, until the end of the Euro 2012 campaign. Calls for change are pointless but there is no doubt that Capello's own performance was unconvincing.

Capello insisted he selected the best squad available to him. But did he? Apart from Parker's continued absence, Bolton's Kevin Davies was a preferable option to Cardiff City's Jay Bothroyd who, in the fashion of the veteran striker against Montenegro, presumably won his first and last cap on Wednesday.

And the Italian's decision to utilise Everton's Phil Jagielka, suffering with illness prior to the game, at right-back was tactically naive and flawed, saying little for his belief in Micah Richards. Jagielka was ruthlessly targeted by Eric Abidal and Florent Malouda, but let us hope the folly of Capello's decision does not rob the defender of the confidence accumulated by outstanding performances in his more familiar position of centre-half.

Capello's luck was also out when Steven Gerrard sustained a hamstring injury in the closing stages, prompting a hot-headed Tweetfest from Liverpool fitness coach Darren Burgess, angry at the fact that their captain had been left on for longer than the apparently agreed 60 minutes.

Some sympathy for Capello here, though. As he pointed out, he had already lost Barry and Rio Ferdinand to injury at the interval and needed a senior figure on the field of play to guide the younger generation. 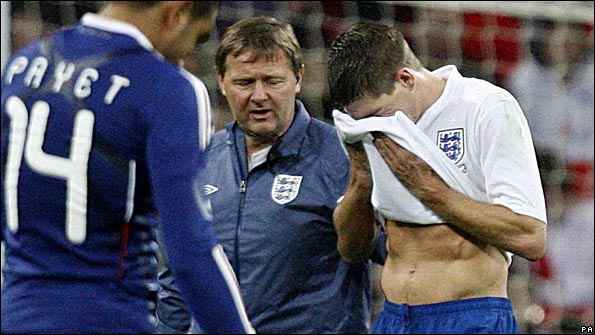 And while this is no personal criticism of Gerrard, why should certain England players turn up for international games with pre-ordained instructions on how long they will actually play? It was simply ill-fortune and Capello did not deserve to be on the receiving end of such a rant.

Capello will hope his hand is strengthened by the return of players such as Rooney by the time England play Argentina in February but hopes that the meeting with France might signpost the way to a bright future turned out to be a forlorn one.

France taught Capello and England harsh lessons in front of a disapproving sell-out Wembley crowd. Whether the players are available to learn from them is open to question after this chastening reality check.