Roy Hodgson's reign as Liverpool manager has declined at such speed that even owners Tom Hicks and George Gillett were spared Anfield's wrath for a few brief moments on Sunday.

It currently requires events of previously uncharted mediocrity to divert The Kop's attention away from the despised owners, but Hodgson's Liverpool achieved it as Blackpool joined Northampton Town in leaving Anfield triumphant this season.

Liverpool supporters, with no serious form for ever demanding managerial change despite thousands gathering in the streets in protest against the American duo, chanted the name of Anfield icon Kenny Dalglish as Hodgson's tenure moved ominously from transition to crisis.

Dalglish is the default option for those seeking unity at this troubled club. And despite the Scot being told in no uncertain terms by chairman Martin Broughton that he was not seen as Liverpool managerial material only a few months ago, it will still have been an uncomfortable experience for Hodgson. 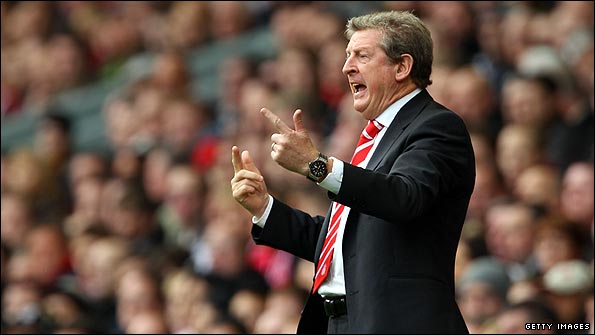 Hodgson looked increasingly frustrated as Liverpool were defeated by Blackpool

It was, at the very least, a rare and highly significant public show of dissent from Anfield towards their own manager and a sign of growing unease with Hodgson's performance.

It might be the Reds' worst start to a season for 57 years but the very notion of Liverpool dismissing a manager after only seven Premier League games is unthinkable and rightly so. Even if they wished to contemplate this nuclear option, they could hardly afford to do it anyway, such are Liverpool's reduced financial circumstances.

I wrote at the time of his appointment that Hodgson was the perfect "safe hands" and common sense choice for Liverpool after the turbulence and failings of the latter days of the Rafael Benitez era. It is too early to sway from that belief, but Hodgson is not giving his backers much to cling to.

There is no escape from the brutal truth that Hodgson faces a fight for credibility and a battle to win the hearts and minds of Liverpool's usually loyal following after the 2-1 defeat by the Seasiders.

Hodgson has been deeply wounded and insulted by the growing suggestions - backed up by a start that has been, at the very best, hugely undistinguished - that he has swiftly found himself out of his depth after leaving Fulham to succeed Benitez.

If the whispers are to be silenced and the doubters dispersed, however, he needs Liverpool to discover a spark from somewhere to end what currently appears to be a headlong and unstoppable lurch into Premier League obscurity.

Liverpool's sole league win has been a narrow victory against West Bromwich Albion, and all the positive spin after the Northampton debacle centred on two upcoming and supposedly winnable games against Sunderland and Blackpool.

Well they have come and gone, with Liverpool coming from behind to earn a point against Sunderland and ending up empty-handed against a Blackpool side that conceded 10 goals without reply on their trips to Arsenal and Chelsea.

It is only right that criticism of Hodgson's start is put in context. This is the very least this experienced and respected manager deserves. He inherited a team in decline from Benitez, despite the Spaniard's latest protestations that he left behind a club in relatively rude health.

As former Liverpool star Jan Molby pointed out during the Northampton defeat, if you wanted evidence of Benitez's legacy, there was plenty on show as they went out of the Carling Cup.

Liverpool deservedly finished seventh last season and had not won a trophy for four years. Anfield's financial situation, and the inertia and unrest created by a backdrop of owners waiting to sell without willing buyers in evidence, means Hodgson cannot reshape competely as he wishes.

And, crucially, he has inherited a world-class striker in Fernando Torres who is locked in a period of doubt, both physically and mentally, after a long run of injuries.

Javier Mascherano's decision to down tools on the day of the defeat by Manchester City put an early dent in Hodgson's plans. And while it could be said Hodgson should have been ready for his long-drawn out departure, the manner and timing was of the "hole in the head" variety.

These are Hodgson's mitigating circumstances. They should be quoted when criticisms are raised and shape judgements - but he has also made an uninspiring start.

Liverpool's fans naturally want to lavish adoration on their manager. Benitez was still being showered in it by many long after it became clear his reign was on the wane.

Hodgson, however, has done nothing to fire up Liverpool's fans, little to capture the imagination. He has cut an uninspiring figure and Liverpool's style of play has been unadventurous, borderline dull, and at times clueless.

Despite working in the hothouse of Inter Milan, it appears even a man of Hodgson's experience is taking time to grasp the unique nature of the beast that is Liverpool Football Club. Now he must get a grip on the job.

After the tedious Europa League draw in Utrecht Hodgson said: "I think people are piling expectations on the club which are unrealistic."

This is a matter for debate. Liverpool's history suggests aspirations should never be downgraded too much, and it is certainly not overloading on expectation to assume Liverpool might beat Northampton Town, Sunderland or Blackpool at Anfield. One of them anyway.

Since the days of Bill Shankly, there has been a natural bond between Liverpool's supporters and their managers. Hodgson may get there, and it is too early to announce that he will not, but he has not won over the Anfield faithful.

Hodgson must start to swing a few punches in his own defence. This does not mean a succession of outlandish statements designed to attract attention and headlines, but a few home truths delivered within and without Anfield.

He was too timid in the face of Sir Alex Ferguson's recent criticisms of Fernando Torres' behaviour at Old Trafford. The situation did not require Hodgson to publicly offer to take Ferguson around the back of the Stretford End and administer a sound thrashing, but it at least required a robust defence of Liverpool's striker, with perhaps a nod towards Nani's theatrics in Liverpool's 3-2 defeat.

The response came several days too late - but at least it suggested Hodgson was grasping what Liverpool supporters expect from their manager. They do not expect polite society when their club is under fire from Old Trafford.

Hodgson needs to tread a careful line between defending his corner and raining blows on himself, as Benitez did in a needless and ultimately futile war of words with Ferguson, but he was wrong to seemingly believe responding to criticism of Torres was beneath him.

The fixture list has intriguingly presented what some now regard as a ticking time bomb under the Hodgson regime. The opposite may yet be true.

If Hodgson wanted a game to show what he is all about, and what he can become, as Liverpool manager then their next game, a Merseyside derby at Everton on 17 October, presents a perfect opportunity.

Beating the old enemy never does any damage to the stock of Liverpool's manager, so Hodgson may have been given a "get out of jail" card on a ground where they have a good recent record.

Hodgson also needs to get tough with players who are not producing. Liverpool's performance against Blackpool was on the bad side of abysmal, a heartless affair given their current unpalatable league position.

Worryingly for a manager who prides himself on coaching and tactical wisdom, Liverpool look disorganised, lacking in direction and momentum. And when I have watched Hodgson's charges this season they have lacked passion, base camp for any Liverpool side.

Take a look at England full-back Glen Johnson, painful though this may be. Seemingly intent on showing you do not get much for £18m in the modern transfer market, Johnson showed his old failing of crass defending to needlessly foul Luke Varney for Charlie Adam's penalty, then produced a horror show of positioning when Varney scored Blackpool's second.

Hodgson has moved to strengthen Liverpool's squad, but the imports have yet to impress. Joe Cole has struggled to make any sort of serious impact from the moment he was sent off against Arsenal, while Christian Poulsen is conservatism personified and Raul Meireles is bedding down. Paul Konchesky, an old Hodgson acquaintance from Fulham, is struggling with injury.

And what of additions behind the scenes?

He has arrived alone from Fulham, not taking any staff with him and not appointing any new faces to his Anfield coaching team. Perhaps he needs an extra pair of hands and eyes, not to usurp long-time Liverpool stalwart Sammy Lee, but to augment him and beef up the backroom team.

And as the BBC's Alan Hansen said on Match Of The Day 2, this is not about owners, it is about players. No-one should hide behind the shambles in the boardroom as a shield against the shambles Liverpool have become on the pitch.

Hicks and Gillett can take the blame for plenty, but they were not the men failing to defend against Blackpool or playing in the manner that has seen Liverpool drift into alien territory near the foot of the Premier League.

Hodgson's hope of pushing Liverpool back towards the Champions League places already looks a distant target. And how will another season in the Europa League, or even out of European competition altogether, test the loyalty of men like captain Steven Gerrard, outstanding goalkeeper Pepe Reina and Torres?

Fortunes can change swiftly in football. It was only five months ago I sat in Fulham's press room as Hodgson was afforded the rare accolade of warm applause from a group of assembled journalists when he appeared after their Europa League semi-final win against Hamburg.

Hodgson will hope things turn quickly in his favour. He retains the self-confidence inspired by nights like that, insisting he remains "one of the most respected coaches in Europe". It is a status earned in a worldwide 35-year career and one that should cushion him against the blows he is currently taking.

Hodgson now needs to produce that magic to win the battles facing him on and off the pitch at Liverpool.