England's failure to beat an infant nation ranked below the might of Burkina Faso and Gabon in Fifa's dubious world rankings put the current standing of Fabio Capello's team into brutal context.

The inevitable aftermath of England's shameful South African World Cup campaign was that coach Capello was only ever going to be one poor performance away from a return to the pressure cooker.

And after England's tentative strides forward in victory against Bulgaria and Switzerland in their Euro 2012 qualifiers came this turgid goalless draw against Montenegro, a country with a population of 670,000 and only four years into its life as a football force.

It was a sign of the bankruptcy of ideas and invention contained in this England display that Capello was reduced to undignified bickering over the amount of time German referee Manuel Grafe added on at the conclusion of a game that, for most people inside a rapidly emptying Wembley, could not finish quick enough.

If England cannot complete the task successfully in 93 minutes against Montenegro on home soil, they hardly deserve the luxury of more added minutes - and Capello was wrong to complain.

Yes, England had an open-and-shut case for a penalty ignored when Milan Jovanovic handled Ashley Cole's cross in the closing stages, but the overall paucity of the performance meant there was not much sympathy for Capello's team.

Capello faced renewed questions about his future after those hardy enough to remain inside Wembley until the final whistle delivered their own raspberry-sounding verdict on England's sluggish, leaden and witless display. 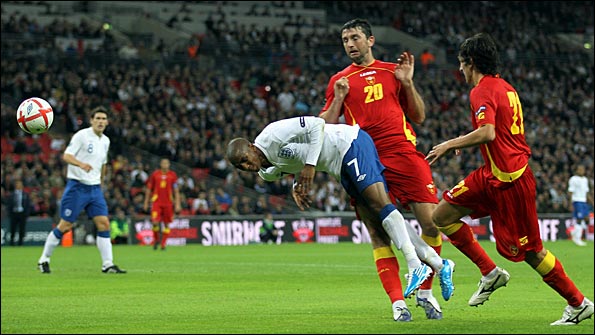 He insisted he would fight on - and, of course, he is right to do so as seven points from England's opening three Euro 2012 qualifiers hardly represents a crisis. The initiative in Group G, however, now lies with Montenegro, as proved by wild celebrations on the pitch - and indeed in the media tribune - at the claiming of a precious point.

The Football Association is not going to change the manager. Capello is not going to walk away. And, for all the grim evidence of Tuesday, the smart money would still be on England reaching Euro 2012.

It is time, though, to cut through the cosmetics and be realistic about the hopes and aspirations for the England team.

Unpalatable as it may seem, England must accept the brutal truth that their place is no longer anywhere near the game's top table. The World Cup confirmed it and the relative ease with which Montenegro survived at Wembley only underlined the work needed to restore England to a going concern on the biggest stage.

England are an average side firmly ensconced in the second tier of the world game and no longer a force where and when it matters. And they will be there for some considerable time. To think otherwise is delusion.

Expectations should be shaped by the current limitations. Failure to beat a side of Montenegro's stature should not come as such a shock any more.

England have outstanding players in the shape of Ashley Cole, Steven Gerrard and Wayne Rooney, plus a batch of exciting emerging youngsters, but as a team the long road on the return to international credibility will be a tortuous one.

Indeed, Montenegro, without danger men Mirko Vucinic and Stevan Jovetic, almost made a bad night even worse when Jovanovic hit the bar late on.

I still believe England will reach Euro 2012 but it would need the next generation of talent to blossom at an almost inconceivable speed to imagine victory in Poland and Ukraine.

England have quality youngsters coming through but, as the exciting Adam Johnson proved with an inconsistent display, they will still be works in progress by the time the finals happen.

Capello thought long and hard about introducing Jack Wilshere against Montenegro and decided against it. Arsenal's outstanding teenager was probably best out of the morass of mediocrity.

Worryingly for England, we saw a return to the static, lifeless style that characterised the agony of South Africa. Montenegro put five midfield men in front of the back four and effectively asked Capello's men what they were going to do about it.

The answer? Very little. It is a code England struggle to crack.

Gerrard and Gareth Barry were allowed the ball in safe areas but, the odd glorious pass from Liverpool's captain apart, there was very little creation. Urgency swiftly disappeared, while ideas quickly ran dry.

Gerrard was too deep too often, too many balls were aimlessly lobbed in the direction of Peter Crouch's head and the theory of having a left-footed winger on the right - Adam Johnson - and a right-footed winger on the left - Ashley Young - failed to work, resulting in too many turns inside into Montenegrin traffic.

Capello had some mitigating circumstances. He was robbed of strikers Darren Bent and Jermain Defoe, who may have snapped up the odd half-chance, but there was little room for excuses.

Montenegro keeper Mladen Bozovic made crucial saves from Wayne Rooney and Barry but his goal was never really under siege - and as time ran out there was even the danger of a sucker punch flooring England.

There were some major personal disappointments on a night when no England player seriously enhanced his reputation.

Rooney, after flourishing under intense personal pressure in Basle, was anonymous apart from a late chance - and his frustration surfaced with a wild tackle on Elsad Zverotic that brought a second-half booking. 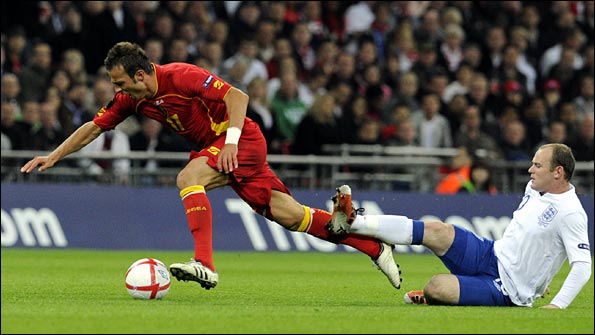 The hope lingers that a spark will soon reignite in Rooney as he is too rich a talent to lie dormant for long but there is no doubt he is in the middle of the most frustrating spell of his career. He looks at odds with himself and his game - a concern for England and, particularly, Manchester United.

Barry also looked desperately slow and off the pace, watching helplessly as Montenegro players eased away from him, barely playing a pass of consequence all night, while
Ashley Young was given a rare start but did not cover himself in glory. A promising beginning was wasted amid poor end product and a desire to disappear up blind alleys.

Worst of all was a shameless dive from the Aston Villa player in an attempt to win a second-half penalty, sadly something for which Young has gained a reputation around the Premier League. It is a scar on his game and he will swifly learn that Gerard Houllier will not indulge this behaviour.

As for Glen Johnson, he can only be grateful there appears to be no obvious rival in Capello's mind for the right-back slot. To say the Liverpool defender is out of sorts, for both club and country, is to do him a great kindness. He does little to suggest he is a player of international calibre.

Only Bolton's Kevin Davies had a night to remember as he became the oldest man to make his England debut for 60 years in a robust 22-minute cameo that came complete with a booking.

There was little else to cheer - and Capello now has until 26 March, when his team face Wales in Cardiff, to get this result out of his system and for England to get used to their reduced status in the game's pecking order.