Why Houllier is right for Aston Villa

General Charles Krulak called on all his years as a US Marine commander to defend Gerard Houllier - and this was even before the Frenchman walked through the doors at Villa Park as the club's new boss.

Krulak's colourful intervention on behalf of the man he has already christened "Mr H" was, however, a clear indicator that Houllier's announcement as Aston Villa manager has not exactly been a cause for rejoicing among the regulars.

And yet Krulak, who revels in his image as a straight shooter in his dealings with Villa supporters as owner Randy Lerner's right-hand man, hit the nail on the head when he said: "Whatever anyone thinks of him, he deserves respect from the fans of this club."

Houllier does not only deserve respect as a person, he has a record in football that also deserves respect - and this is why Lerner is in the process of making a sound choice by appointing the former Liverpool manager as successor to Martin O'Neill.

Out of those linked with the job, such as Alan Curbishley, Sven-Goran Eriksson, Ronald Koeman and Villa reserve team coach Kevin MacDonald, Houllier's record of success in England, as well as his experience and vast contacts, made him the outstanding candidate from those Lerner has targeted.

I should declare some past history here. I got to know Houllier very well during his time at Liverpool and respected his occasionally complex but always fiercely driven and totally professional approach and personality.

And it is worth setting the record straight as history is in danger of delivering a flawed judgement on Houllier's time at Liverpool.

In the desire to paint him as a failure at Anfield, it is worth recalling he rebuilt the entire culture and philosophy of the club after the excess - and in a football context pure waste - of the so-called 'Spice Boys' era. How could a team of such natural talents only have a Coca Cola Cup win against Bolton in 1995 to show for their gifts?

This was acknowledged by then chief executive Rick Parry on the day Houllier left Anfield in May 2004, when he said: "Gerard changed things off the pitch as well as on it, bringing back both our pride and self-respect and instilling discipline and professionalism throughout the club.".

Houllier knew a fresh approach was needed and, after the inevitable break-up of his arranged footballing marriage with Roy Evans, he provided it. 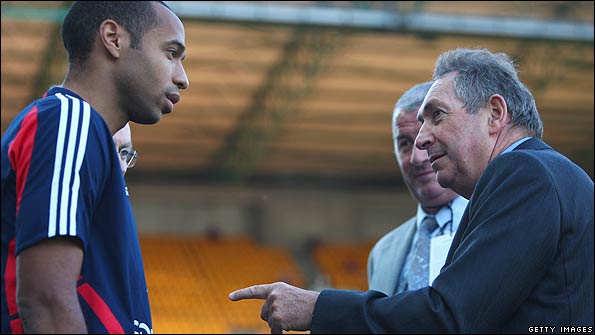 Houllier is currently the national technical director of French football

Out went those he regarded as having outlived their usefulness, such as Paul Ince, in came a new, more pragmatic approach - and one that brought serious success back to Liverpool. He was accused of building a functional as opposed to flamboyant team but the ends justified his means.

Houllier's transfer record is often criticised and even he would struggle to make a case to defend the failures of players such as El-Hadji Diouf, Salif Diao and Bruno Cheyrou at Liverpool. Indeed, those three players are often paraded as the symbols of the beginning of the end of the Houllier era at Anfield - perhaps with some justification.

But the critics may care to remember masterstrokes, such as the signing of Sami Hyypia, a snip at £2.5m from Willem II (helped by a glowing reference from a Dutch television cameraman on a visit to Anfield), who went on to become one of the finest players and servants of the modern Liverpool era.

Stephane Henchoz was another inspirational addition to the spine of the team Houllier rebuilt. Then there was Didi Hamman, goalkeeper Jerzy Dudek and Gary McAllister.

If Houllier can recapture some of that magic in the market - and his knowledge of players has always been encyclopaedic - then the worries of the Villa faithful might just disappear.

Jamie Carragher's admiration for Houllier was evident in his presence alongside current boss Roy Hodgson on the Liverpool bench for his testimonial against Everton at Anfield on Saturday. Carragher, regarded by most as a manager of the future, revealed he would hope to model his approach on Houllier, such was his influence over his career.

And Steven Gerrard, the man Houllier appointed as Liverpool captain, also spoke glowingly about him while on England duty in Basle on Monday.

Danny Murphy was another who saw a career on the drift revitalised by Houllier to such an extent that he still flourishes for Fulham today. It is too easy to recall Houllier's failures while conveniently forgetting his successes.

Those players will also remember how Houllier fought back from the brink of death and major heart surgery in 2001 to return to Liverpool and resume his duties. How easy it would have been for him to walk away to a quiet life in France. Instead, he accepted he could not live without the game.

On another significant operational note, he also oversaw the complete overhaul of Liverpool's Melwood training base into the ulta-modern complex it is today - even helping design dressing rooms without pillars so no-one could "hide". Houllier was happy to conduct tours personally for journalists, such was his pride in the new home for his "family", as he referred to the club and his players.

And last but not least, he dealt in a currency Liverpool understands very well - success. Liverpool fans, even those who choose not to regard his reign with affection these days, will never forget 2001 and the treble capture of the Worthington Cup against Birmingham City, the FA Cup against Arsenal and the Uefa Cup against Alaves in Dortmund.

Again, Houllier's detractors pointed at "the Lucky Treble" - and admittedly the victory against Arsenal almost ranked as grand larceny when Michael Owen won an FA Cup final dominated overwhelmingly by Arsene Wenger's team - but you do not have success like that on the back of a hot streak of good fortune. 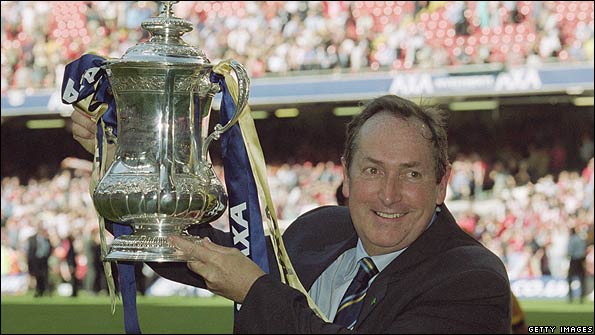 He added the Worthington Cup again in 2003 with Liverpool's win against Manchester United in Cardiff but there was a growing sense his tenure had lost momentum after six years in charge by the time he made an amicable departure from Anfield at the end of the following season.

Houllier had become overburdened by pressure and criticism in his final season. Too many signings, such as Harry Kewell, did not come off and Liverpool were too far adrift of the title challengers for him to survive.

Kewell's arrival from Leeds United in the face of competition from Manchester United and Arsenal was greeted with the same elation as Joe Cole's recent signing by Roy Hodgson. Instead, the Australian was a desperate failure at Anfield.

This does not mean Houllier himself should be regarded as a failure. Many of the same players won the Champions League against AC Milan the following year, although no-one can deny Rafael Benitez also brilliantly plotted a course through that campaign.

And there is even a case to be made that he left a better side for Benitez than Benitez subsequently left for Hodgson.

Villa fans might show some understandable concern that these achievements were a lifetime ago in Premier League terms but Houllier has hardly been a man with his finger away from football's pulse.

He won the French title twice at Lyon before stepping down in May 2007 and has since travelled all over the world watching the game in his role with the French Football Federation.

Houllier is in good health and his movre to Villa confirms he retains the desire to succeed in club management even though he has just celebrated his 63rd birthday. His great friends Hodgson and England coach Fabio Capello are 63 and 64 respectively and no-one can question their enduring passion for the game.

He will bring meticulous planning and an almost slavish attention to the details of tactics and preparation to Villa Park. After once asking Houllier to help with a rundown of teams for the 2002 World Cup in Japan, I arrived at his Melwood office to find him armed with pages of notes detailing his thoughts on the qualities or otherwise of each side in the tournament. Lack of preparation was not an option.

Villa's players will want for nothing in the pursuit of success, although they must buy into Houllier's team ethic and approach or there will be no future for them.

Houllier has had plenty of approaches in recent years. He has been linked with jobs at club and international level and remains a hugely respected figure within football's worldwide community. He always wanted a club that could satisfy his ambitions, which are aimed firmly at success, and he clearly believes Villa is a club that can match those aspirations.

An insight into Houllier's approach to football came when he was advised by some to retire from football after his serious illness, responding: "Football is my life and my oxygen and I don't want to live without it."

Now his next mission will be to breathe fresh life into Aston Villa.